In March 2016, in what turned out to be his final Budget announcement, chancellor George Osborne left a parting gift for developers. He promised a new statutory deadline for ministerial decisions on called-in applications or recovered appeals to be determined within three months. After all, housing delivery was now a major priority in Whitehall – the last thing ministers wanted was to be seen as a drag on delivery.

The intention, Osborne said, was "to prevent time delays on decisions on infrastructure, housing and regeneration projects". Two years on, his pledge seems all but forgotten. Meeting it requires the secretary of state to make all decisions within three months of receiving the inspector’s report, a detail confirmed by the government shortly after the former chancellor made his announcement. The Ministry of Housing, Communities and Local Government (MHCLG) publishes all decisions on called-in applications and recovered appeals made by the secretary of state on its website.

In the 2017/18 financial year, there were 69 such decisions. But analysis by Planning reveals that the secretary of state made a decision within three months of receiving an inspector’s report on just five occasions, a success rate of seven per cent. Our analysis shows that none of the 11 call-in decisions listed by the MHCLG as published in the year to 31 March met the three-month timetable.

Kathryn Ventham, a partner at consultancy Barton Willmore, says the three-month deadline has never carried any significant weight. "I don’t think I’ve ever had a recovered or called-in decision within those timescales," she says. "We had one through recently that arrived 18 months after it was recovered by the secretary of state." 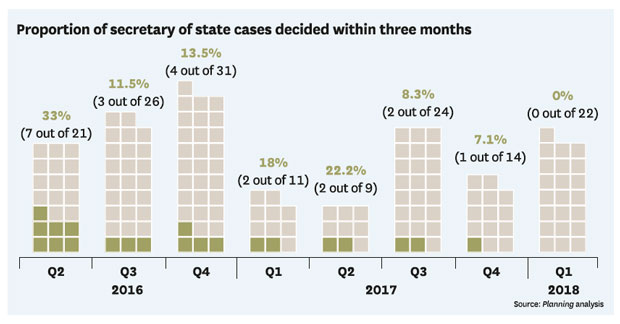 However, when Planning presented the findings of our research to the MHCLG, a spokesman said that officials "do not recognise these figures". He pointed to previously published statistics indicating that 51 per cent of planning decisions subject to statutory deadlines issued by the secretary of state in the 2016/17 financial year were determined on time. Provisional calculations indicate that the vast majority of such decisions published in 2017/18 were made within the deadline, he added.

The discrepancy between the department’s 80 per cent estimate and our seven per cent figure seemed baffling. After all, dates for submission of inspectors’ reports and determination dates are both clearly stated on decision letters, so calculating the proportion of decisions made within three months should be straightforward. So we showed the ministry our workings, inviting it to comment on whether we had miscalculated, and if so how.

The MHCLG suggested the discrepancy between its numbers and ours might be due to Planning’s figures not taking into account instances in which the secretary of state had varied his decision timetable. It said paragraph 6, schedule 2 of the Planning and Compulsory Purchase Act 2004 allows this, as long as he notifies the appropriate parties. "Our analysis of our performance takes into account timetables being varied," the spokesman said.

Another factor that could account for some divergence is that the MHCLG, rather than calculating the number of decisions it makes on time in the way apparently envisaged by Osborne, instead calculates the number of "cases" decided on time. Some cases cover several decisions. A further possible cause of variation is that the MHCLG discounts cases decided jointly with a minister in another department or "linked to a type of case for which another secretary of state has responsibility". Such caveats were not mentioned by Osborne when he announced the three-month deadline.

In March 2017, then planning minister Gavin Barwell told Planning he was "very aware of the commitment that we’ve given" and said "it’s absolutely right that people should hold us to account in the same way we hold local authorities to account". Ghislaine Halpenny, director of external affairs at the British Property Federation, says: "It’s all very well to set deadlines for others but it’s important to put your money where your mouth is."

The complexity of the applications and appeals that end up with the secretary of state is another reason given for missed deadlines. Of the 45 cases in 2016/17 that the ministry accepts were decided late, it says 36 "raised unusually complex issues which required careful consideration". Another factor is workload pressure within the department, blamed by the ministry for the lateness of nine of the 2016/17 decisions. However, the number of cases determined by the housing secretary has fallen by almost a third year on year.

Alex Morton, planning director at the P4MD think-tank and a Number 10 adviser on planning in the Cameron era, points to the need for careful consideration of cases. "It is clearly better that the secretary of state makes a considered decision than a rushed one," he says. Yet applications for thousands of homes await decisions; an examination of 13 cases called in since 23 January 2017 that remain undecided shows that they include at least 1,600 homes. Many more proposed homes will be subject to ministerial decisions on recovered appeals not made within the three-month deadline.

Andrew Whitaker, planning director at trade body the Home Builders Federation, says: "It is frustrating that the secretary of state cannot meet his self-imposed deadlines." That is compounded, he says, by the fact that there is no one else to whom housebuilders can turn. "There is no further appeal process and there is a widely held perception that repeatedly pushing for a decision could result in the appeal being looked upon unfavourably," says Whittaker. "There is, therefore, little builders can do but wait."

DECISIONS THAT LINGERED IN THE SECRETARY OF STATE’S IN-TRAY

On 17 August 2015, Mid Sussex District Council refused outline plans from developer Linden Homes for up to 200 homes at the farm, sparking an appeal process that lasted almost two years. After a public inquiry on 25 October 2016 the inspector recommended approval, noting the contribution to housing need. After correspondence between the secretary of state and interested parties, approval was granted on 1 March this year (DCS Number 200-007-375).

The college’s plans for education facilities alongside 348 homes in September 2013 were refused, with St Albans City and District Council citing the green belt location. After a public inquiry in May 2016 the inspector recommended approval. Despite the green belt concerns, the secretary of state granted approval in the absence of a five-year housing land supply, finding that the new facilities could only be funded by residential development (DCS Number 200-006-985).

Outline plans for 200 homes and a 9.5-hectare country park from Wates Developments were refused by Mid Sussex District Council on 4 November 2015 on the grounds of impact on the surrounding area. After a public inquiry in May 2016 the inspector recommended the appeal be dismissed but, after advice from Natural England on the likely impact on a special area of conservation, the secretary of state granted planning permission in March (DCS Number 200-007-378).