The city of Birmingham will only be able to provide between a half and two-thirds of the 89,000 new homes it needs between 2011 and 2031 within its own boundaries. That issue was effectively settled when Birmingham City Council’s development plan was adopted in January 2017. The adopted plan said that the remaining 37,900 homes would need to be provided by the other 13 authorities in the Greater Birmingham and Black Country housing market area.

According to Craig Jordan, head of the economic service at Lichfield District Council, one of the affected authorities, the HMA councils promptly recognised that their local plans would become vulnerable to challenge if they did not take steps to address Birmingham’s shortfall. Together, they commissioned consultancies GL Hearn and Wood to explore the options for strategic development to meet housing need across the HMA.

The consultants published their report, called the Birmingham Strategic Growth Study, in February. It contained some welcome news for the authorities, in that it concluded that the outstanding shortfall across the HMA to 2031 was now 28,150 homes, almost 10,000 fewer than suggested by the city council’s plan. This, according to GL Hearn planning director Nick Ireland, was partly because of local plan progress since consideration of the city council’s local plan. It also suggested that around 13,000 of those homes could realistically be achieved through densification, without requiring identification of new sites.

But it also confirmed that big planning challenges remained. Sites capable of supporting a minimum of more than 15,000 homes across the HMA by 2031, and 47,800 homes by 2036, would be needed. But if the economic objectives of the West Midlands Combined Authority’s strategic economic plan were to be met, much higher targets of 69,000 to 2031 and 116,000 to 2036 would need to be achieved.

Inevitably, political sensitivities were exposed by the consultants’ identification of possible options for strategic development that could provide the housing needed by 2031. They said that the scale of the need provided "a clear basis for progressing a strategic review of the Birmingham green belt". And they highlighted possible sites for four new settlements of more than 10,000 homes, four possible urban extensions of more than 1,500 homes and three employment-led mixed-use schemes, each including more than 1,500 homes, "to be taken forward for further assessment through the plan-making process".

Bromsgrove District Council leader Geoff Denaro responded to the report’s publication by saying that "it cannot be stressed strongly enough the council has not accepted the findings of the study". Stratford-on-Avon District Council leader Chris Saint told local media: "We have no plans for a new settlement as outlined in the report". The 14 councils collectively put out a statement stressing that the GL Hearn and Wood report "does not in any way commit the participating authorities to development of any of the geographic areas referred to". Nonetheless, Birmingham City Council corporate director for the economy Waheed Nazir argues that the study marks an important step towards agreeing how the housing shortfall should be met. "There are not many places that have got a housing evidence base across all the HMA, so that’s quite an achievement," he told Planning at last month’s MIPIM property fair. "The combined authority and the local authorities recognise that we will have to use this so we can agree on how we meet the need."

Matthew Fox, a director in the Birmingham office of consultancy Turley, says that the HMAs’ councils will now have to demonstrate that they have considered the study when preparing or reviewing plans. Lichfield’s Jordan says that any authority that ignores the study "will find it difficult to move forward on its own local plan".

Consultancy Barton Willmore’s senior partner Mark Sitch, who is based in the firm’s Birmingham office, agrees that authorities drawing up or reviewing plans "would be expected to consider the sites" identified in the study. 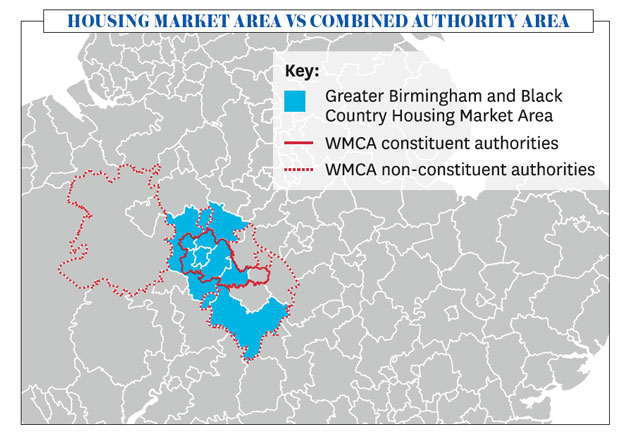 But councils that are further advanced in their plan-making may not feel the same pressure, he argues. "If their plan has identified preferred sites or allocated sites, they may not wish to revisit the process," he says. He also questions whether, in the absence of a statutory city-region plan, there will be enough onus on authorities to progress the sites identified by the study.

Fox thinks the study represents only limited progress. "While we now know what the shortfall is, we don’t have any indication of how it will be distributed," he says.

Some local stakeholders are wondering whether new city-regional mayor Andy Street might take a more proactive role in addressing the shortfall. Jordan feels the mayor is more focused on delivering homes that have already been planned than persuading the city-region’s authorities to plan more of them. "But if the shortfall continues not to be resolved, is that when you would expect a body like the combined authority to want to intervene?" he asks.

As mayor, Street chairs the West Midlands Combined Authority (WMCA). Speaking to Planning at MIPIM, WMCA chief executive Deborah Cadman confirmed that her organisation is primarily focused on delivery. The WMCA has just agreed a housing "package" with government that saw it commit to the delivery of 215,000 homes across the city-region by 2031, in return for £350 million of funding. "We are absolutely about the laser-like delivery of 215,000 homes," Cadman said.

Planners in the city-region are trying to work out whether this development might also help progress discussions between the HMA’s authorities on how to share out responsibility for meeting the shortfall. The connections are not obvious, as the housing deal target applies to delivery rather than planning. It also applies only to the combined authority area, which has significantly different boundaries to the HMA.

But there are elements of the housing deal that might help the HMA’s authorities to reach agreement over how to meet the shortfall. Nazir says the funding will help to fund infrastructure that will allow the city council, when it updates its local plan next year as part of its monitoring process, to increase the number of homes it plans from 2011 to 2031 by 7,000.

The housing deal also requires local plans for both the WMCA’s constituent and non-constituent local authorities "to be updated, as necessary, by the end of 2019 to deliver and accommodate 215,000 homes by 2030/31". Exactly what criteria member councils will have to meet to demonstrate that their plans have been "updated" is unclear. But any step that galvanises plan-making will push the authorities towards engaging with the findings of the GL Hearn and Wood study.

The deal will also require the member authorities to reach agreement on a split of responsibility for housing delivery, which optimistic observers might see as boding well for future negotiations on meeting the shortfall. Cadman says that every member authority is signing up to a mayoral strategic spatial plan (SSP) "which will be the sum total of all the local plans". "The SSP will be subject to scrutiny," she says. "The local authorities have signed up to be part of a process that allows for strategic oversight of delivery."

As for the specific task of deciding how the HMA’s housing shortfall will be divided up, attention will now turn to forthcoming local plan examinations. Sitch expects the forthcoming examination of North Warwickshire Borough Council’s local plan, which was submitted last month, to be keenly followed. "There will be a lot of interest in the weight attached to the GL Hearn study by the examination," he says