Interviewed last year, Planning Inspectorate (PINS) chief executive Sarah Richards outlined plans to improve customer service while cutting expenditure by nearly £6 million over four years. "This is the balancing act that we have: to reduce our overheads and fixed costs, but at the same time to maintain performance and quality, which is equally important to us," she told Planning.

That balancing act looks to have been harder than may have been first thought. According to the latest average timescales for planning appeals, standards are slipping almost across the board. By March 2018, the expected wait for appellants in written representation cases had risen to 24 weeks, a 25 per cent increase in less than a year. Average waits for hearings were 36 weeks. Householder cases now take 15 weeks; more than double the average duration in 2013/14. Appellants in cases involving inquiries can still expect to wait an average of nearly a year before receiving a decision.

All this is in sharp contrast to the government’s "planning guarantee", first trailed at the end of 2012, which states that "planning applications should be decided in no more than 26 weeks, allowing a similar period for any appeal". Simon Ricketts, planning partner at law firm Town Legal, said: "It’s obviously completely gone out of the window." He cites a current case where a housing scheme was refused by councillors, against the advice of officers and in the absence of a local plan. An appeal was submitted in December, but a hearing date has still not been set. When Ricketts tweeted his frustration last month, others were quick to chime in with similar experiences. 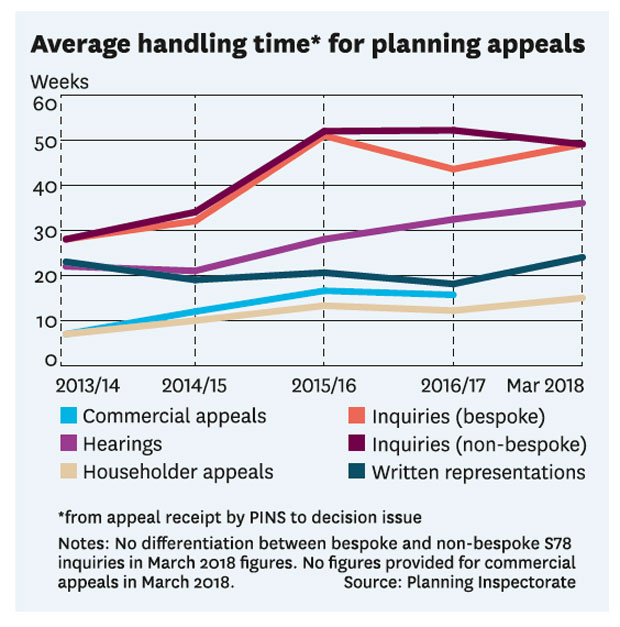 Duncan Field, planning partner at law firm Norton Rose Fulbright, said he recently waited about four months to receive a start date for an enforcement appeal. He pointed to the economic impact of such delays. "It places investment in limbo," he said, adding that it is not only developers who are concerned. "From the local planning authority’s perspective, I imagine it’s also very frustrating because clearly they want an early resolution."

Andrew Burgess, group land and planning director at Churchill Retirement Living, is another dissatisfied customer. Burgess said he has 17 appeals currently making their way slowly through the system. They include a 42-apartment scheme in Thame, Oxfordshire, where an appeal was lodged in April last year and a hearing is yet to take place. Churchill has since had to revisit both viability assessments and ecological reports because the appeal process has taken so long, Burgess said. Burgess added that this is just one of the issues associated with lengthy appeals. In other cases, contracts with landowners have had to be renegotiated after they expired, he said.

In October last year, his firm wrote to the prime minister, Theresa May, raising concerns about "considerable and worsening delays obtaining dates for planning appeals". Nearly three months later, the company received a reply from communities secretary Sajid Javid. "I have asked my officials to look further into capacity issues within the Planning Inspectorate," Javid wrote. The firm is yet to receive any further response. "We’re not very hopeful that there’s going to be anything happening," said Burgess.

When Javid unveiled the revised National Planning Policy Framework earlier this month, he pledged to launch an "end-to-end review of the planning inquiries process" with a view to halving the time taken. "What does it actually mean? Does it mean more administrative staff and more inspectors?" asked Ricketts. "I worry that they are maybe focused on changes that reduce the robustness of the process."

Burgess suggested that one option would be to reduce the number of appeals landing in PINS in-trays by introducing penalties for planning authorities that have refusals that they have issued against officers’ advice overturned.

For Ricketts, the small amount of investment required to get PINS back on track, while maintaining the integrity of the appeals process, would be vastly outweighed by the economic benefits of reducing delays and building more homes.

In a statement, PINS said it continues to recruit new inspectors to meet demand for its services and pointed to the unpredictability of its workload as one of the factors behind delays. "We are confident that our performance will improve by changing the way we work and introducing new systems," it said. "This has to be done while continuing with our day-to-day business of processing more than 18,000 appeals each year and will take time."

This has all been happening during a time in which ministers have been stepping up their rhetoric against councils seen to be failing in their duty to plan for homes in recent years. Given the delays at PINS, both Burgess and Ricketts see a degree of hypocrisy in this stance.

"The government is in no position to criticise local authorities," said Ricketts. "If local authorities were able to sit on applications for two or three months before validating them, then there would be absolute uproar. The government would not sit back and allow that to happen – but that’s exactly what’s happening with appeals."