Under pressure to meet government performance targets while maintaining a quality development management service, stretched town halls have increasingly made use of mechanisms to avoid or extend statutory deadlines for planning applications.

The latest figures from the Ministry of Housing, Communities and Local Government (MHCLG) show a sharp increase in the number of what it calls performance agreements – planning applications that are decided with an agreement that more time will be taken over and above the statutory timeframe, which is eight weeks for minor applications and 13 weeks for major ones.According to the figures, the number of decisions made under such agreements to extend the 13-week major applications deadline has risen by a factor of four in just three years, from 2,187 in 2013-14 to 8,094 in 2016-17.

The figures, however, include three types of agreement. Commentators say many of these are planning performance agreements (PPAs), an apparently fast-growing tool in which councils and applicants agree at pre-application stage certain milestones for processing the planning application outside the statutory time limits. Authorities are able to charge extra for PPAs, which were first formally introduced into the planning system in April 2008. 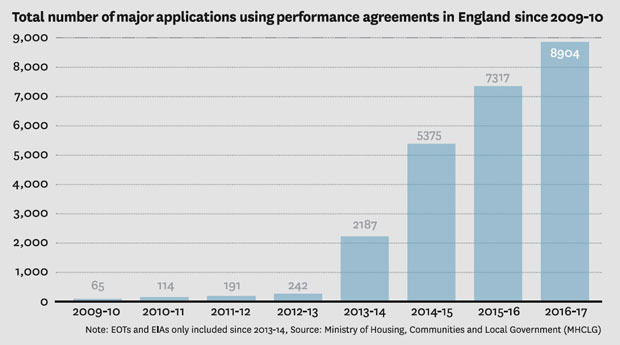 However, from April 2013, the government began including two other types of application in the figures. Firstly, those involving extension of time (EoT) agreements, where the applicant and council agree that the application can be determined beyond the legal deadline, with no extra charge for applicants. And secondly, schemes that are subject to an environmental impact assessment (EIA), where the deadline is 16 weeks, rather than 13, because of the extra work required.

The government figures do not break down the three categories. However, many experts, including the Local Government Association’s Planning Advisory Service (PAS), say it is clear that PPA use has risen substantially in recent years. Martin Hutchings, PAS improvement manager, says he is "confident that this is the case". While PPAs are normally paid-for, formal agreements made before an application is submitted, EoTs are agreed after submission, he says. Stephen Hill, director of consultancy Hyas Associates, says an EoT "commits the applicant not to appeal against non-determination of an application for a specified period".

According to Mike Kiely, chairman of the Planning Officers’ Society, which represents local authority planners, many of the performance agreement decisions would be PPAs. EoT agreements have also become more frequently used "over the last four to five years", says Kiely, after the government decided that applications using such agreements should be excluded from the government’s eight-week deadline. He adds "EIA apps are much less prevalent – once in a blue moon for some authorities."

The rise in PPA usage is due to both resourcing pressures faced by cash-strapped councils and calls from the development industry for greater certainty over timescales, according to practitioners. "It came on the back of criticism from the development industry that the performance in planning departments was not what it should be," says Anna Rose, head of PAS. "The industry felt it wasn’t getting the service it required and it was prepared to pay for a better one because it would lead to more effective delivery in the long run."

Westminster City Council’s director of planning John Walker says his authority was one of the first to start using PPAs. "They were drawn up with the support of our development industry," he says. "We went to them and said: ‘We’ve got to make savings like everyone else, so unless we can increase our income we can’t keep as many professional staff as we have in the past.’"

The MHCLG figures show that there are 32 authorities – about one in ten – where the proportion of major applications subject to performance agreements is more than 75 per cent (see table, right). The top ten shows a geographical mix of councils, but it is notable that half are in London or the East of England. In first place is the London Legacy Development Corporation, where the rate is 91 per cent.

"We have a lot of major applications and we use PPAs in order to provide a good service and to protect ourselves against not dealing with these applications in a statutory timetable," says Anthony Hollingsworth, the corporation’s director of planning policy and decisions. "One of the things developers look for is certainty around when the application will be determined, and the PPA allows that." Further benefits provided by PPAs include consistency of staff handling the application and more flexibility in allowing proposals to be altered during the process, says Hollingsworth. From the council’s perspective, he says PPAs encourage "the discipline of making decisions and meeting certain milestones in the application process."

Unlike planning applications, there is no standard charge for a PPA, as each authority has its own charging regime. Westminster City Council, for example, charges £26,000 plus VAT for major application PPAs, and £15,000 plus VAT for PPAs for any other applications involving complex issues. Stratford-on-Avon District Council, by contrast, does not charge any fee for PPAs.

Overall, Walker estimates that Westminster raises about £2 million a year from PPAs, which he says supports 17 professional planners in the 50-strong department. Though applicants have to pay extra for them, Walker says the various PPAs offered are still very popular. "A lot of people with no PPAs who get a standard service say they should have done a PPA," he says. "If the eight weeks are up, then we have to determine the application. If the applicants have not dealt with all the issues, then it will be a refusal, so applicants have a much better chance of success if they sign up to a PPA." 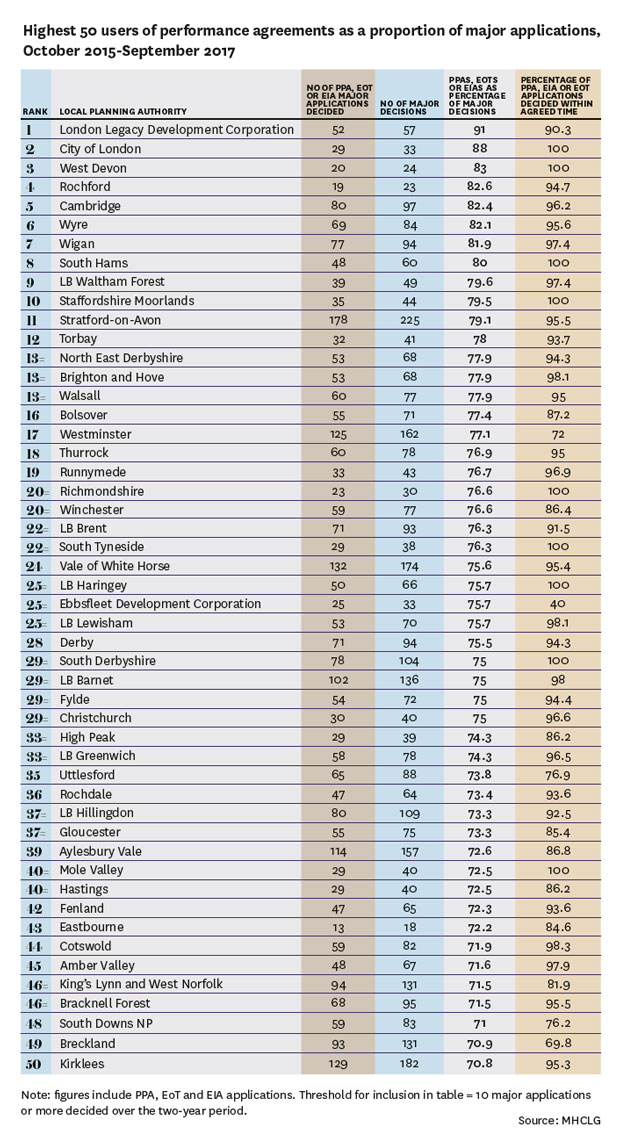 Hill says PPAs have key benefits for applicants. "They help to set out a timetable with key milestones, they encourage joint dialogue between the local planning authority and applicants, and they can be used as a project management tool, to set out issues to be tackled and a format for meetings and correspondence," he says.

Rose was previously director of planning at Milton Keynes Council, and says the authority used PPAs for large schemes. One of the reasons developers liked them was because they offered applicants ongoing engagement with a single officer, she says. "The consistency and certainty that the PPA offered suited the development industry very well and it allowed the local authority to know what was programmed in at which point," she says.

Robert Weeks, head of planning and housing at Stratford-on-Avon District Council, which is 11th in the list of highest proportional users, says his authority’s planning service is one of the busiest in the country. He says that PPAs are needed to deal with amendments to applications and to provide "much valued certainty over timeframes" for developers.

For some authorities, such as third-placed West Devon Borough Council, the preference is to use EoT agreements, which made up the majority of their cases. "Planning agents are often happy to secure extensions of time early in the process to agree which committee the scheme should go to," says Patrick Whymer, development management lead specialist at the council. "This could be a simple PPA but we are happy to deal with it by extension of time, as are the agents."

The authorities with the lowest proportion of major applications decided via performance agreements are Hull City Council and Pendle Borough Council in Lancashire. "I’m not an advocate of entering into a PPA for the sake of it," says Hull City Council’s planning manager Alex Codd. "If a development is relatively straightforward, you should be dealing with it in the target times anyway." Neil Watson, head of planning at Pendle Council, says it also only uses PPAs where absolutely necessary. "Pendle has not received many applications that would be described as large-scale, complex major applications where PPAs would be useful," he says. 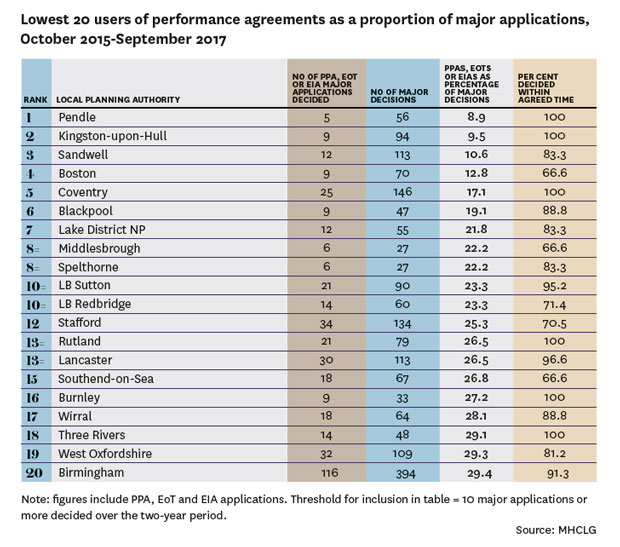 Some observers from the development industry argue that there should be greater policing of the PPA regime. Stuart Andrews, partner at law firm Eversheds Sutherland, says the level of fees being charged by some authorities is "inappropriate" while there is a lack of "diligence, monitoring and control". It won’t be long before a disgruntled developer legally challenges the process, Andrews predicts, adding that there needs to be more accountability involved.

Rose accepts that there have been some concerns over the use of PPAs. "I do hear tales where developers say they are not getting the value they expect from the process," she says. "But I think that, like anything in planning, the processes we have work better in some places than others." 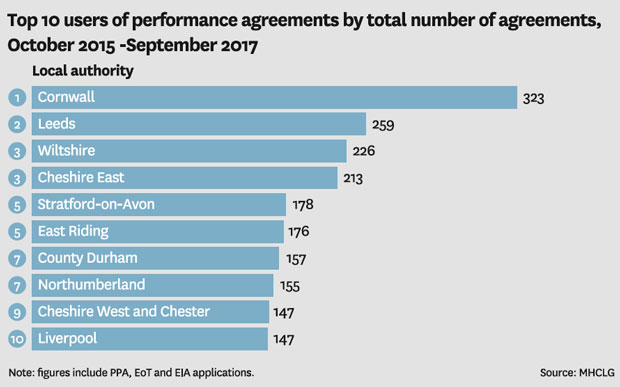 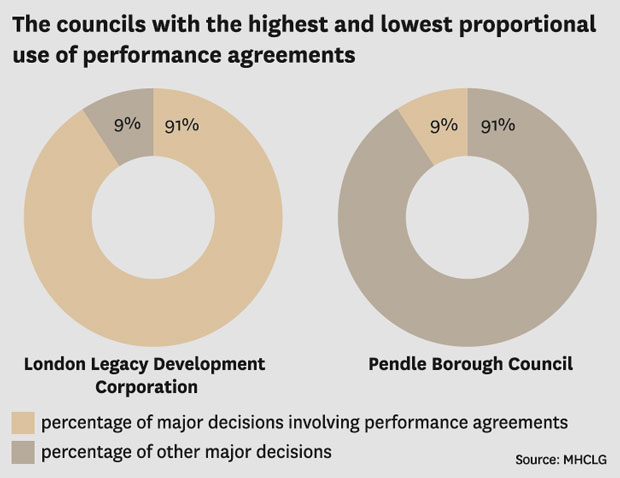 Note: this article was amended at 9am on Friday 23 February to clarify that commentators, including the Planning Officers Society's Mike Kiely, said "many" of the performance agreements would involve PPAs, but did not say it would involve the majority of them.