Many councils will be poised for a fresh recruitment drive following the implementation of the forthcoming planning application fee increase, experts predict, with authorities also likely to invest in process improvements.

The 20 per cent across-the-board increase in planning fees is set to come into force on 17 January, after the regulations paving the way for the hike were debated and approved by the House of Lords grand committee before Christmas. The change means that councils will be able to levy application fees ranging from £96 to £300,000, up from the existing fees range of £80 to £250,000.

Planning authorities are likely to use the increased funds primarily on recruiting extra staff, said Mike Kiely, chairman of the Planning Officers Society (POS) which represents local authority planners. "Authorities may want to invest in IT and in work like masterplanning and investing in their local plan," he said. "But the vast majority of the extra fees will be used to recruit people, and mostly in development management."

Kiely said some authorities that are planning recruitment drives would be ready to launch them immediately, as they would have been planning ahead for additional income from a source that they would have seen as predictable and secure.

But POS president Steve Ingram, strategic director of development and growth at South Kesteven District Council, warned that that the rise would not necessarily lead to prompt appointments. "It does take time for local authorities to go through the necessary process if we are to recruit staff, so it is not an instant fix," he said.

Ingram said his authority would be using the fee increase to recruit experienced officers to enhance the authority's pre-application service. Boosting the council's urban design expertise would also be a priority, he said. "Elected members are very keen that, if we are to have development, it has to be of the right quality," he added.

Andrew Davie, development infrastructure group manager at Central Bedfordshire Council, said the danger of focusing on recruitment is that all authorities would be "fishing from the same pond". Hence recruitment might not be a panacea for capacity problems, he said.

Davie said his authority would instead be looking at process changes, including streamlining activities such as validation and registration of applications. It would also be prioritising staff retention, he added. Central Bedfordshire Council has recently successfully developed trainees, many of whom have come in as non-planners and have been trained up at the authority. "We've had a range of people, including people who have worked in the retail sector, " said Davie. "They come in at trainee level and they are content to stay with us and work up to planning officer level."

Research conducted last year by Planning, in association with the Planning Officers Society (see chart below), revealed that council planning departments expected to be able to increase their staff by an average of almost five people over the next two years as a result of the application fees rise. The research showed that 95 per cent of planning authority respondents to the survey ranked development management as the number one priority for any additional spending enabled by the fee rise. 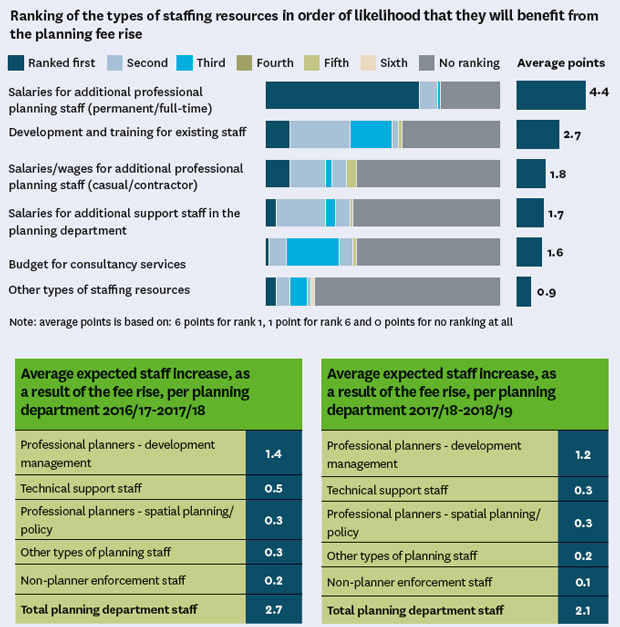