"There was a lot of panicking; people running around like headless chickens." According to a witness, that was the scene at one council when communities secretary Sajid Javid published his list of 15 recalcitrant planning authorities earlier this month. Given that none of the councils had been given prior warning, the reaction was understandable. "They were going ‘nobody told us’. You’d have thought they’d at least have been told the day before – ‘we’re going to put out a naughty list and you’re on it’.

In a written statement to parliament, Javid noted that more than 70 authorities have failed to adopt a plan under the Planning and Compulsory Purchase Act 2004 regime and that "I am particularly concerned about the 15 local planning authorities that have recently either failed the duty to cooperate or failed to meet the deadlines set out in in their Local Development Schemes".

As a result, Javid added, he had written to the 15 authorities identified to "start the formal process of intervention", effectively putting the local authorities on notice that they could potentially be stripped of plan-making powers in their own areas. So what should we make of the councils selected for intervention? And how might that intervention work in practice?

The authorities selected are certainly a varied bunch, ranging from southern, Conservative district councils in Essex, to the staunchly Labour Liverpool City Council. The reasons behind their inclusion also vary. "The point is that there is no single reason why they have been selected," said independent consultant Derek Stebbing.

There is a general consensus that none of the 15 authorities should have been surprised to find themselves on the list. "On the face of it, all those subject to intervention are relatively self-selecting," said Matthew Spry, a senior director at consultancy Lichfields. "I think they would struggle to argue that they have a strong record of plan-making."

However, the absence of some authorities from the list has raised eyebrows. "I’m surprised that Guildford isn’t on the list – they’ve got a pre-2003 plan and have been highlighted previously," said another consultant. "They might just have saved themselves by getting their draft plan to committee the week before the list was announced."

Elsewhere, Dave Trimingham, managing director at consultancy Turley, notes other inconsistencies. "Bury last adopted a development plan in 1997," he said. "It is not clear, therefore, why Liverpool, where a UDP was adopted in 2002 is on the list while Bury is not. It perhaps indicates that the work on the Greater Manchester Spatial Framework has been regarded as an ‘exceptional circumstance’."

Map: The 15 authorities threatened with intervention 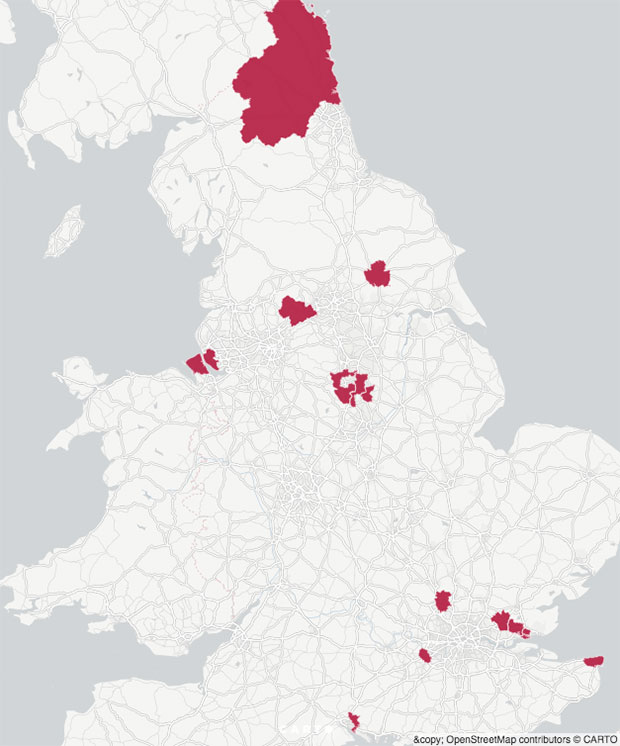 While there is no common theme, quite a few of the councils on the list have failed on the duty to cooperate. St Albans, Castle Point, Runnymede and Bolsover have all tried to put a plan in place but have then had to go back to square one. However, this does not elicit much sympathy. "They have failed to undertake satisfactory cooperation with their neighbours on strategic planning issues," said Stebbing. "And that is exposed at local plan examination. I think the regulations are crystal clear on the duty to cooperate."

The other issue facing many of the authorities on the list is green belt. Basildon, Essex, is a case in point. "It’s a very politically charged place and the local plan is incredibly contentious because they might have to release quite a lot of land," said one local observer. "On the one hand the government is saying ‘you don’t have to use green belt’ and on the other it is saying ‘you’ve got to build more houses’."

In terms of the form the intervention might take there are various options on the table. Direct intervention by the Department for Communities and Local Government (DCLG) or the Planning Inspectorate is a possibility, although if the resulting plans are to be examined that could get tricky. It may also be politically difficult – a DCLG plan would have to be done in the name of the secretary of state, thereby directly involving Javid in highly contentious local politics. As a result, most commentators believe an alternative will be found.

"The most obvious – and politically expedient – route is for county council teams to take over and there’s no reason they couldn’t build teams to do the work fairly quickly," said Spry. "However, outsourcing to consultants is another option. The key is around political accountability for decisions made in plans and how local people and stakeholders are engaged to ensure legitimacy."

Whatever happens, intervention could get very expensive. "The authorities involved will have to pay back the cost of the intervention," said Stebbing. "It’s potentially very expensive for the councils involved. It’s not free of charge – they can be charged and I would expect DCLG to do just that."