Under the special measures regime, councils designated as under-performing face the prospect of being bypassed by developers, who can opt to seek planning permission directly from the Planning Inspectorate.

From next year, under revised criteria announced in December 2016, a local planning authority will be eligible for designation where more than 10 per cent of its total number of decisions made during the two-year assessment period are subsequently overturned on appeal.

Data published last week covers a different two-year period to the timeframe that will be used to make designations next year (it covers the period January 2015 to December 2016, whereas designations will be made on the basis of decisions made over the period April 2015 to March 2017). But it suggests that the revision to the criteria is likely to affect some town halls.

The figures show that eight authorities saw more than 10 per cent of major decisions made during the period January 2015 to December 2016 overturned on appeal (see table below), while three authorities (Havering, North Lincolnshire and the Isle of Wight) saw more than 10 per cent of decisions made on minerals and waste applications overturned on appeal over the same period. 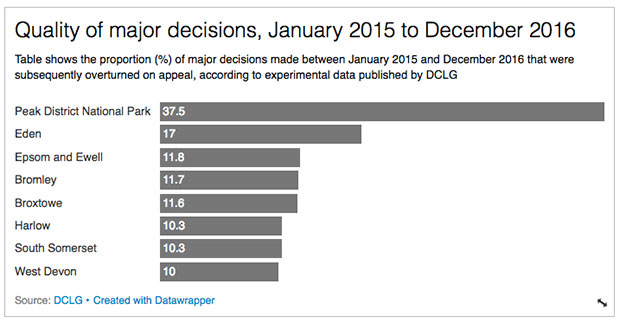 However, last week’s data suggests that authorities are likely to be unaffected by a parallel extension of the quality of decisions measure to non-major applications. The worst performing authority (the London Borough of Hillingdon) only saw 4.2 per cent of its non-major decisions overturned on appeal over the period January 2015 to December 2016, the figures show.

Publication of data on quality of decision-making resumed in August after it had been placed on hold due to "technical concerns" over some of the appeals data. Data released in August, covering the period July 2014 to June 2016, showed a group of 10 authorities had more than 10 per cent of major decisions overturned on appeal.

Following the August data release, the local planning authorities identified as having the greatest proportion of major decisions overturned on appeal said that they intend to fight off the threat of designation.