Speaking to the BBC’s Andrew Marr yesterday, Hammond said the Budget would set out how the government would reach this target, a 50 per cent rise from the previously-cited aspiration of 200,000 homes a year.

Hammond promised a "number of measures" in the budget to boost housing delivery including help for small- and medium-sized housebuilders and intervening to get unimplemented planning permissions built out.

The chancellor said "record numbers" of planning permissions were currently being delivered and referred to figures published by the Department for Communities and Local Government last week showing 217,350 net additional dwellings in England last year, up 15 per cent on 2015/16. 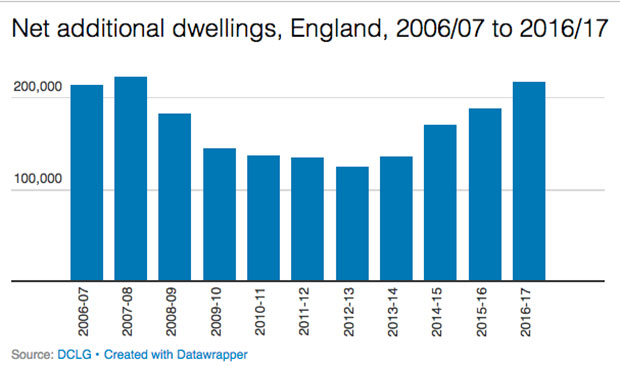 But he said: "We have to build more homes.

"The challenge here is affordability. Experts generally agree that to start to make inroads into the affordability problem, we have to be sustainably delivering around 300,000 homes a year. That’s a big step up from where we are now."

The chancellor said there was no "single magic bullet" to increase housing supply and did not commit to the reported £50 billion in borrowing being demanded by communities secretary Sajid Javid to finance a house-building drive. "It’s certainly not just about pouring money in," he said.

"But there are lots of things we can do using planning powers, using intervention powers to get planning permissions that have been granted built out.

Hammond also promised that driverless cars would be on the UK’s roads by 2021.

Meanwhile, the Royal Town Planning Institute (RTPI) today said that its chief executive Trudi Elliott had written to the chancellor urging him to use his Budget to intervene in the land market and give local authorities more powers and freedom to build homes.

According to the RTPI, the letter highlights three areas that it considers "key to solving the housing crisis":

Meanwhile, the mayor of London’s office said today that he and 21 London borough have also written to the chancellor on the issue. Their joint letter calls for the government to:

The RTPI letter can be found here and the Mayor of London letter here.