The white paper said that the test will "highlight whether the number of homes being built is below target, provide a mechanism for establishing the reasons why, and where necessary trigger policy responses that will ensure that further land comes forward".

The white paper proposed to measure housing delivery using net annual housing additions, assessing the rate of housing delivery in each area as the average over a three-year rolling period.

It said that the first assessment period "will be for financial years April 2014-March 2015 to April 2016-March 2017". Official net additions data covering this period was published for the first time today.

Initial sanctions set out in the February white paper would see councils falling beneath certain thresholds required to produce an action plan (additions below 95 per cent of housing requirement), or plan for an additional 20 per cent buffer on their housing land supply (additions below 85 per cent).

The white paper had proposed that the sanctions would be introduced this month, but Planning revealed in September that the introduction of the test had been delayed, with the timetable for its introduction currently unclear.

An analysis by Planning using today’s net additions data, based on the methodology set out in the white paper, finds that net additions fall beneath 85 per cent of the housing requirement in 56.8 per cent of authorities (shaded red on the map below). Under proposals for the delivery test’s first phase of sanctions, as set out in the white paper, these authorities would be required to plan for a 20 per cent buffer on their five-year land supply, if they have not already done so. 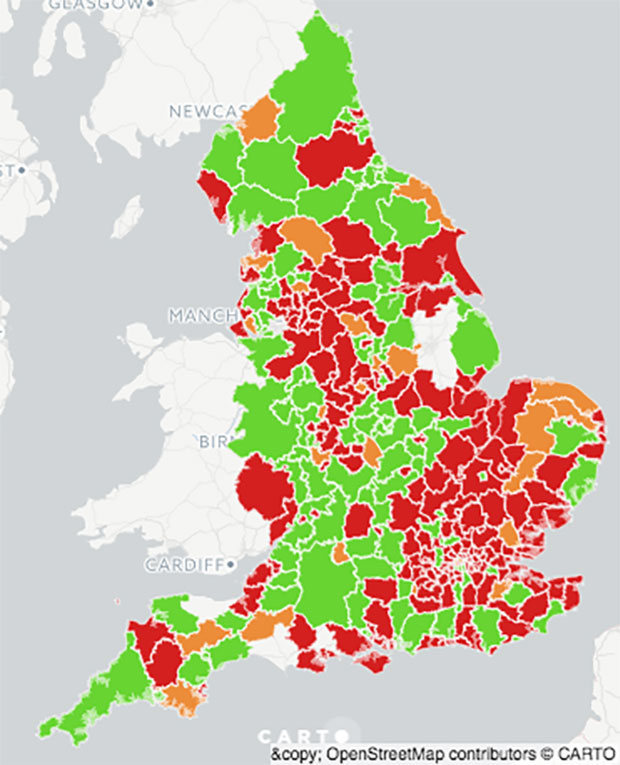 Net annual additions would fall below 95 per cent of the housing requirement (but above 85 per cent) in a further 8.6 per cent of authorities, Planning’s analysis indicates (shaded orange on the map above). The white paper said that, in such instances, an authority would from this November be required to publish an action plan, "setting out its understanding of the key reasons for the situation and the actions that it and other parties need to take to get home-building back on track".

Just over one third of authorities (34.6 per cent) would face no intervention, according to Planning’s analysis (shaded green).

Today’s analysis updates a previous exercise carried out in September, which was based upon net additions figures for the period 2013-16.