The south-east London borough's development control committee and executive are this month being asked to endorse plans to consult on a preliminary draft charging schedule.

Bromley stands alone among London's councils as not having published CIL proposals for consultation, according to data compiled for Planning's CIL Watch tracker bulletin.

Thirty-one of the capital's 33 boroughs have adopted CILs in place. The only other authority in the capital yet to introduce a CIL is the London Borough of Ealing. Its proposals were passed by an examiner in August 2016, but the council has yet to vote to adopt the levy. 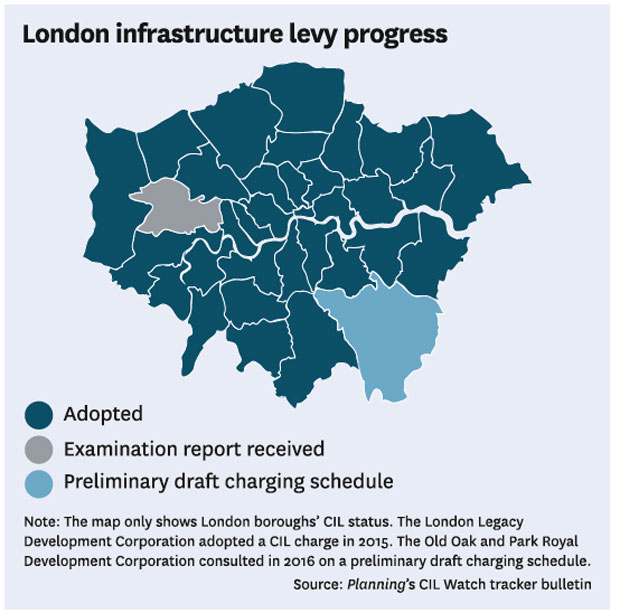 Bedfordshire: Luton Borough Council has formally adopted its local plan after agreeing to an early review of the document.

Gloucestershire: The Joint Core Strategy (JCS) for Cheltenham, Gloucester and Tewkesbury has been backed by an inspector. Elizabeth Ord found "shortfalls" in the provisions of the JCS, but said that the document should be adopted now subject to an immediate partial review.

Leicestershire: The North West Leicestershire Local Plan has been approved by inspector Brian Sims. The council says that the document will go before a meeting of the full council later this month in order to be formally adopted.

Cornwall: Cornwall Council has submitted its CIL draft charging schedule for examination. The document proposes five charging zones for residential development, with rates ranging from £0 to £400 per square metre.

East Sussex: Brighton and Hove City Council is consulting on a CIL preliminary draft charging schedule until 10 December. The document includes a city-wide charge of £250 per square metre for purpose-built student housing.

London: The London Borough of Bromley is set to consult on a CIL preliminary draft charging schedule. Members are being asked to approve plans to consult on the document at meetings of the development control committee and executive this month.