While the future performance of the UK's economy is currently a source of some concern, the nation's planning consultancies are still confident. This year's Planning Consultancy Survey found that 60 per cent of firms believe that their planning team will grow in size in the next year - a slightly lower figure than last year - while all but one of the 20 biggest companies giving a prediction said they they expect headcount to increase.

These optimistic predictions are reflected in the growth figures reported for 2016/17 by the 136 firms that completed the survey. The average number of chartered town planners employed by participating firms has increased steadily over the last three years, from 12.9 in 2015 to 14.7 in 2016 to 15.5 this year. What's more, the ten biggest employers in the survey this year report that they employ a total of 1,061 chartered town planners, compared to 1,018 in 2016 and 987 in 2015.

Eight of last year's top ten feature again this year, with the same five biggest firms as last year, albeit in a different order. Savills tops the list of leading employers of planners for the third year running (see table, belowj). The company employs 169 chartered planners, up slightly from 167 last year, and 227 fee earners, compared to 219 in 2016. Head of planning David Jackson says growth was as expected, with Savills recruiting from both the private and public sectors and continuing to run its graduate programme. Savills also launched a new planning team in its Guildford office, he says, and established new teams within the firm's planning department to advise on economic development and heritage matters. The company's planning division now operates out of 21 locations across the UK, Jackson says.

Barton Willmore moves up to second place in the leading employers table. Its number of chartered planners is up by eight per cent from 132 to 143, with fee earners up six per cent, from 137 to 145. According to Mark Sitch, senior partner at the practice, the growth reflects efforts to further diversify the business. In the last year, he says, the company has sought to broaden its infrastructure planning offer. The firm has seen strong growth in its Reading office, where the number of chartered planners is up by seven from 14 to 21.

At third-placed WYG, the number of chartered planners rose by 16 per cent in the last year, from 120 to 139, which director Gerald Sweeney attributes partly to a high number of existing staff achieving chartered status over the period. WYG has also "increased opportunities for chartered planners to undertake wider managerial and project manager roles", which he says has boosted the company's ability to hire and retain planners. There have been notable rises at the firm's Bristol and Cardiff offices, up by six and eight chartered planners respectively.

In fourth is Capita/GL Hearn, down from second place last year. The only top ten firm to report a drop in chartered planners, its numbers are down by 11 to 133, which exactly matches the rise it had in 2015/16. Planner numbers are down at six of its nine UK offices. However, its fee earners are up by 12 to 170. We contacted the firm to ask what had prompted the change, but it said it was not able to comment.

Lichfields, formerly Nathaniel Lichfield & Partners, remains in fifth place. Chartered planners at the firm rose by three from 112 to 115, and fee earners by one to 168. Lichfields chief executive James Fennell says it has been a stable year for the consultancy. "We have just completed our biggest graduate intake yet and are investing in our own talent for the future as the long-term outlook is good for the industry," he says. In addition, he says, Lichfields is looking to open a new office in Birmingham "to help service our growing workload in the West Midlands".

RPS, sixth in the list, also recorded modest growth in the last year. Its chartered planners are up by three to 111, while fee-earners are up by 34 to 722. David Cowan, RPS Group's managing director of planning and environment, says that RPS is continuing to "actively recruit" planners and environmental assessment professionals. The company also recently introduced a graduate recruitment programme for planners, he adds.

The highest level of growth in the top ten was at seventh-placed Arup. Its planner headcount increased by 17 per cent in the past year to 81, while its fee earners grew by nine per cent to 720. According to associate Kieron Hyams, this was partly down to a high number of junior staff achieving chartered status, but also due to the fact that "all teams across the UK continue to grow organically on the back of new and repeat commissions". One third of its growth was at the London office, which is up by four planners.

Pegasus Planning Group, in eighth, saw a net increase of five chartered planners over the last year, meaning it now employs a total of 70. A spokeswoman for the business says this was due to several staff achieving chartered status over the period as well as growth in its teams advising on heritage and economic development. The number of fee-earners appeared to more than double over the last 12 months, but the spokeswoman says this was due to the company last year using a narrower definition of planning fee-earner that was just restricted to planners, both chartered and non-chartered.

After a three-year absence, AECOM re-enters the survey in ninth place, reporting 52 planners and 102 fee-earners. A spokeswoman for the firm says its UK planning presence was "stable" compared to last year, but the firm was "looking to grow in response to increasing workload".

CBRE climbs into the top ten, with chartered planners up five to 49 and planning fee earners up seven to 63. According to Iain Jenkinson, head of national planning, the growth came in response to demand from sectors such as town centre mixed use and strategic residential, as well as opportunities created by devolution to city-regions. On the latter point, he says that the last year saw CBRE establish a new planning presence in Bristol, now home to two chartered planners.

Outside the top ten, Quod is reporting around four-fifths of the chartered planners it declared last year. This is due to the company last year including all its Royal Institution of Chartered Surveyors-accredited planning surveyors, rather than just those with chartered Royal Town Planning Institute status, according to a spokesman.

The fastest growers in the top 20 were Carter Jonas and Strutt and Parker, which both saw chartered planner numbers increase by more than a fifth. Carter Jonas saw its chartered planners increase from 37 to 46. According to partner Nick Taylor, this is largely down to the acquisition of Oxfordshire-based consultancy Kemp and Kemp in May this year. The firm reports growth of six planners in its Oxford office. Taylor adds: "We are appointed to advise on High Speed Two and through this, we have recruited at least four specialist town planners experienced in rail and rail-related work."

Strutt and Parker also saw its chartered planner numbers rise by more than a fifth, from 33 to 40, while its fee earners increased in similar proportions from 44 to 53. According to John McLarty, partner and head of planning, this was partly down to organic growth, but also the merger earlier this year with property consultancy BNP Paribas Real Estate. There has been a notable increase in planners at its London office, which had just two planners last year but is now seven-strong.

Figures for directors, partners, associates and equivalent, other planners and women planners include fellows and full members of the Royal Town Planning Institute only. The chartered planners 2016 figures do not include staff employed by firms acquired since last year's survey. Total staff include all managerial, professional, technical and administrative staff employed in UK planning services. Fee income figures relate to the year ending 31 March 2017 unless otherwise indicated on page 19. 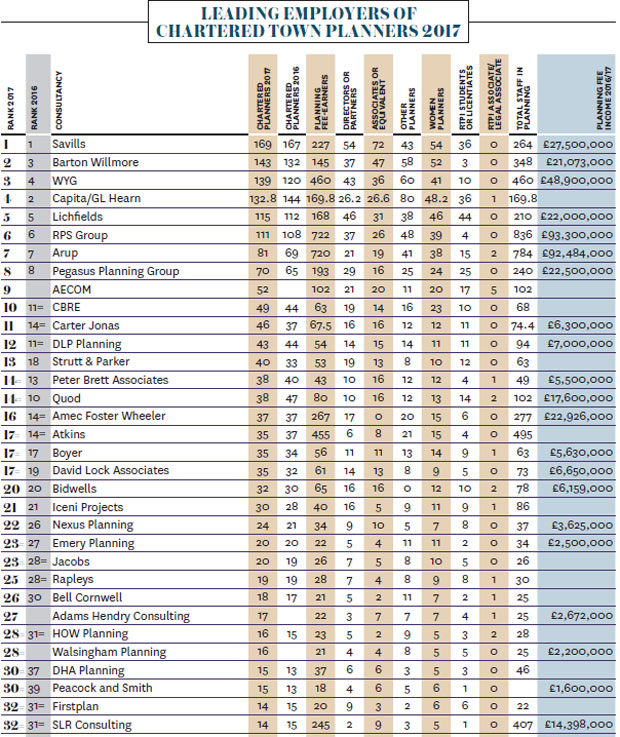 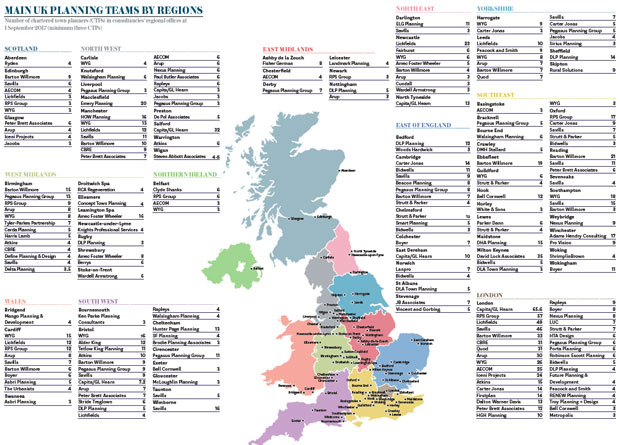