This year's Planning Consultancy Survey reveals growing gloom over the state of the economy as the country heads towards Brexit. This year we received usable responses from 136 companies from across the UK. Only 24 per cent think the economic climate for development will improve in the next 12 months, compared to 40 per cent last year and 88 per cent in 2015. Despite the economic pessimism, 60 per cent of firms still think their consultancy will grow in size in the next year, continuing steady overall growth in planner numbers in recent years (see staffing section, p13).

Consultancies predict that demand for advice on residential planning will continue to show strong growth in the year ahead (see chart, below). Once again, greenfield and brownfield housing advice are tipped as the top-performing development sectors, according to respondents' forecasts of growth in the year to March 2018, though commercial and leisure developments are not far behind. However, growth predictions for the six development sectors for 2017/18 are, apart from greenfield housing advice, noticeably lower than last year's expectations for 2016/17.

"Prospects for planning work in housing work remain strong," says James Fennell, chief executive at Lichfields. "This is underpinned by a fundamental shortage of homes and planning consultants having to make sense of one government policy response after another in attempt to deal with the problem." Outside of development, advice on district-wide plans is tipped as the third-highest growth sector, with seven per cent expansion expected.

Advice on greenfield and brownfield housing were also the top sectors in 2016/17 when it came to reported growth. This matches predictions made in last year's survey, though brownfield housing did not grow as much as expected. At the other end of the scale, consultants reported that the market for retail advice actually declined slightly in the past year, along with demand for advice on waste, health and environmental enhancement. Meanwhile fee income from energy work grew very slowly amid low recorded growth for all infrastructure sectors.

However, consultants expect energy to perform slightly better next year, predicting growth to rise to three per cent. David Jackson, Savills' head of planning, says that, though there has been a "drop off in activity" in renewable energy in the past year, looking ahead he expects "continued investment in the energy sector".

Further commentary by leading firms on market sector growth and decline can be found here. 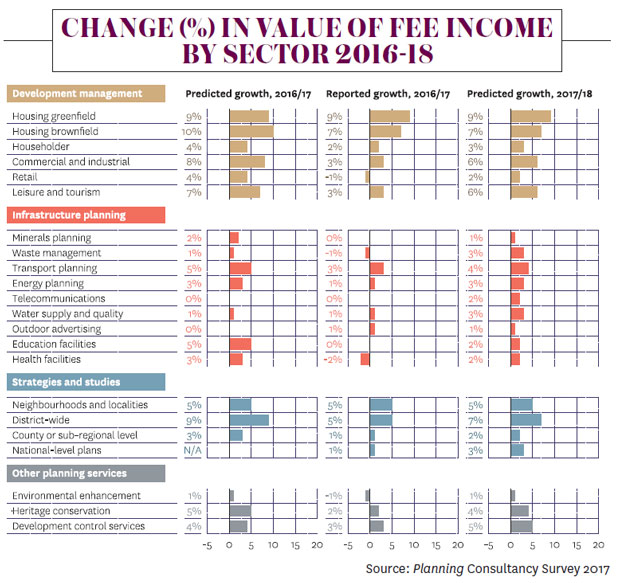