When the Greater London Authority (GLA) published its new London Plan borough housing targets two weeks ago, it’s fair to say that the announcement did not go down that well with some council planning chiefs.

"It’s completely undeliverable," said Steve Barton, strategic planning manager at the London Borough of Ealing, who reports similar feeling among planning teams in other west London authorities. Ealing is one of 13 boroughs that will see their housing targets double or more under the new figures.

In total, 27 authorities will see a rise. An analysis of the GLA’s figures shows that outer London boroughs will take the bulk of the growth in the overall target for the capital, which would rise from 42,000 up to 65,000 homes a year (see map).

Speaking to Planning after the targets were announced, James Murray, the deputy mayor for housing, said the administration had inherited a model of housing delivery that "relied quite heavily on high-end, expensive for sale properties in inner London".

Murray said the GLA was keen to complement that "with greater delivery in outer London where homes built for sale are relatively more affordable".

He added: "We believe that’s the way to have a more sustainable supply of housing and to boost overall numbers." To aid this shift in policy terms, Murray confirmed that the draft London Plan, to be published later this month, would include a presumption in favour of smaller sites, something trailed in September’s draft housing strategy.

"What’s really important is that the target set out for every borough is ambitious. Every part of London needs to play a role in building a lot more housing," he said. "This will mean building at greater densities across the capital, bringing forward small as well as large sites, and building at a greater rate than we’ve seen before."

But Barton described Ealing’s target as "complete nonsense", pointing out that it represents almost a three-fold increase on the borough’s target of about three years ago. Before the last revision of the London Plan in 2014, its annual target was 900 homes, he said, which then rose to 1,300 and is now up to 2,800. While Ealing is a "very pro-growth borough", he criticised the 10-year timescale expected for delivery of the target as unattainable.

Another key concern is over the smaller sites element of the GLA’s new housing target for Ealing, he said, which comes to 1,000 a year. "The three-fold increase in smaller sites is what’s causing real consternation here and across west London. Currently, we are delivering 300 homes a year on smaller sites." The nature of smaller sites means they are "much more difficult to plan for", said Barton, and the council lacks resources to allocate enough plots on that scale. The size of the housing delivery increase requires "much more funding" for infrastructure improvements and land assembly, he added.

Mike Kiely, chairman of the Planning Officers Society and its London spokesman, said that many areas of outer London were "poorly-served by public transport" and would need transport investment to allow building at higher densities. Such boroughs, many of which currently find resourcing a challenge, might also struggle to recruit enough planners to cope with the uplift in workload, he added.

Duncan Field, partner at law firm Norton Rose Fulbright, said he expected town centres to be a primary focus of new housing in outer London: "The big opportunities for developers will be around town centres particularly those with good public transport connections."

But boroughs "will have to be more proactive in planning for housing" in town centres, he said, which would potentially require compulsory purchase orders to assemble land.

Jonathan Manns, a director in the planning team at property firm Colliers, agreed that the onus would be on boroughs "to help facilitate development" by taking a "more active role in identifying suitable land". A key concern for local authorities would be to get "buy-in" from local communities for increased housing levels by demonstrating how "new development will directly benefit them". "Given the speed and scale of the changes that’s a significant challenge," he said.

In response to Barton's claims, a spokesman for the Mayor of London said: "Housing capacity in the draft London Plan is calculated in partnership with boroughs by estimating delivery from sites with planning permission and assessing other large sites for potential capacity.

"The targets include an estimate of the increase in housing delivery on small sites which can be achieved through policy changes in the new London Plan, including a new presumption in favour of small housing developments.

"We want to work in partnership with boroughs to support them to achieve these targets. Solving the housing crisis is not just the task of boroughs or the planning system, it will require developers, housing associations, councils, government and communities to work together to deliver the homes London needs." 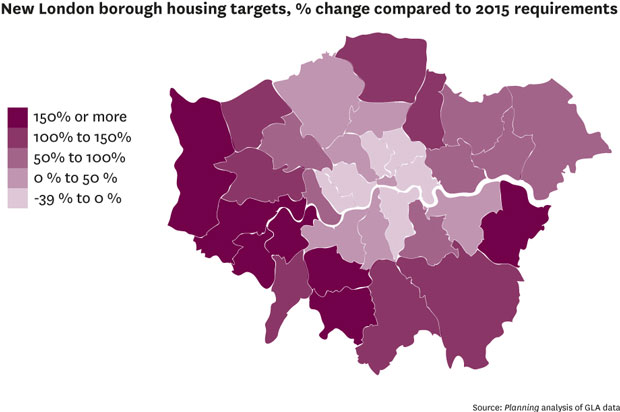 NOTE: this story was updated at 12.15pm on Friday 10 November to include a comment from the Mayor of London.