Last week, Planning took an in-depth look at a permitted development right - the agricultural-to-residential PD right known as Class Q - which has not progressed as smoothly as ministers might have hoped. But the same cannot be said of another PD right, introduced in 2013, allowing larger household extensions without planning permission. Since April 2014, more than 90,000 prior approval decisions on such applications have been issued, far more than any other category of permitted development recorded by government statisticians.

The rules, introduced in 2013, double the size of domestic rear extensions allowed without planning permission. Until 30 May 2019, permitted development size limits for single-storey rear extensions double from four metres to eight metres for detailed houses and from three metres to six metres for any other type of house.

Here are four things that latest government figures reveal about the take-up of the permitted development right.

1. Take-up is largely in line with government expectations
A government impact assessment, published in May 2013, predicted that the permitted development right would mean that "between 20,000 and 40,000 householder developments will no longer be subject to planning permission requirements" per year. The Department for Communities and Local Government (DCLG)’s latest planning statistics, published in September, indicate that just under 29,000 decisions are being taken per year, within the range set out in the 2013 impact assessment.

2. Activity far outstrips other permitted development categories
According to the DCLG’s planning statistics, of the categories of permitted development recorded by the department, more than 70 per cent of the decisions issued by local planning authorities were on prior approval applications for larger householder extensions. The number of decisions issued in the 13 quarters to June 2017 (93,835) far outstrips decisions taken on office-to-residential prior approval applications over the same period (10,811) and agricultural-to-residential conversions (9,250). 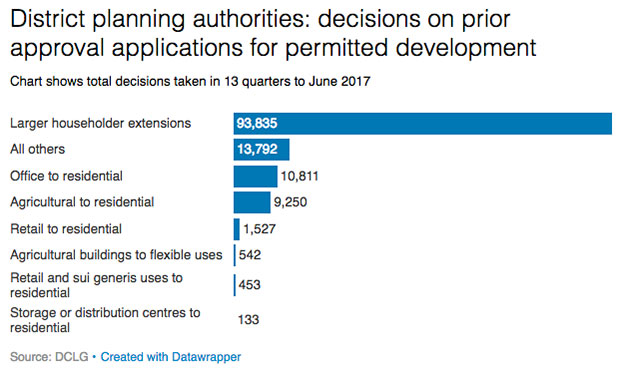 3. The geographical distribution of decisions is uneven
An analysis of decisions data show that activity under this permitted development right is not evenly spread across England. More than one-third of approved prior approval applications over the 13 quarters to June 2017 were decided by London boroughs, the analysis shows. The London Borough of Ealing approved the most prior approval applications for larger householder extensions over the 13 quarters (3,040), followed by the London Borough of Hounslow (2,730) and Redbridge (2,686). Birmingham City Council is the only non-London authority to feature in the top 10 - it decided 2,677 applications over the same period. 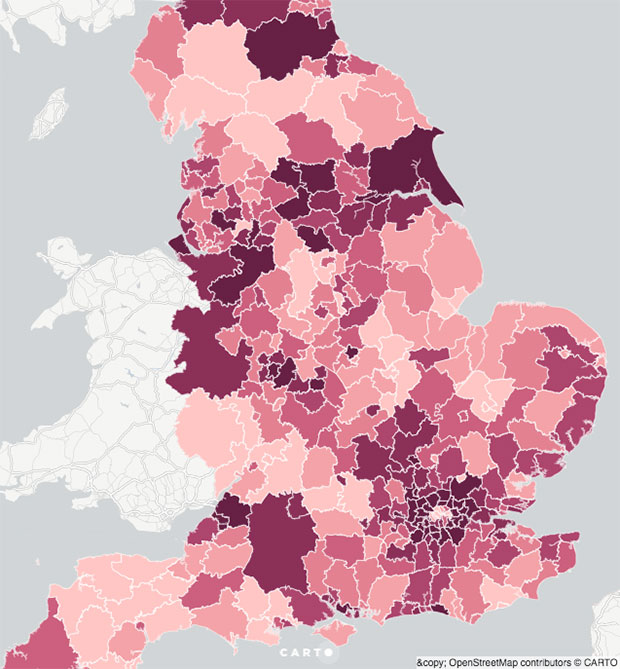 Key: the darker the shade, the more decisions taken

4. Analysis suggests extensions have added billions to property values
An analysis suggests that extensions granted permission under the temporary permitted development right may have added billions to property values in England (albeit with some substantial caveats). A calculator published last month by the Office for National Statistics (ONS) allows homeowners to estimate how much an extension will increase the value of their house. Applying the ONS’s data to the DCLG’s figures suggests that in some of the boroughs with the greatest householder extension activity, prior approvals may have added hundreds of millions of pounds to house values on a borough-wide basis. For example, based on extensions adding a modest additional floorspace of 25 square metres, Ealing’s 3,040 householder extensions would have added £436.7 million to property values in the west London borough. Nationally, the figure is nearly £6.7 billion.

However, the calculations assume that all extensions have been built out, which is unlikely to be the case. And many of the extensions may have been taken forward through planning applications had the permitted development right not existed, meaning that much of the rise in property value is attributable to extensions that would have happened anyway. 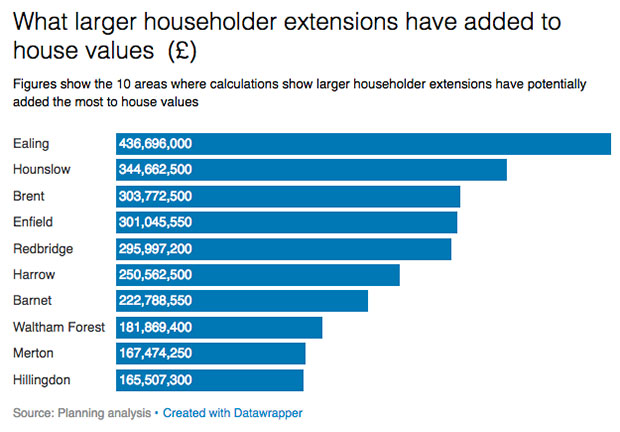