Ord's report found that, while there are "issues with the plan, which cannot be immediately resolved", it is in the public interest for it to be found sound, subject to an immediate partial review.

Once adopted by the three councils, the joint core strategy will be the latest such document to be finalised. Eleven other joint plans have been adopted, including the Black Country joint core strategy in February 2011, followed by Central Lancashire's joint plan in July 2012. (See table). 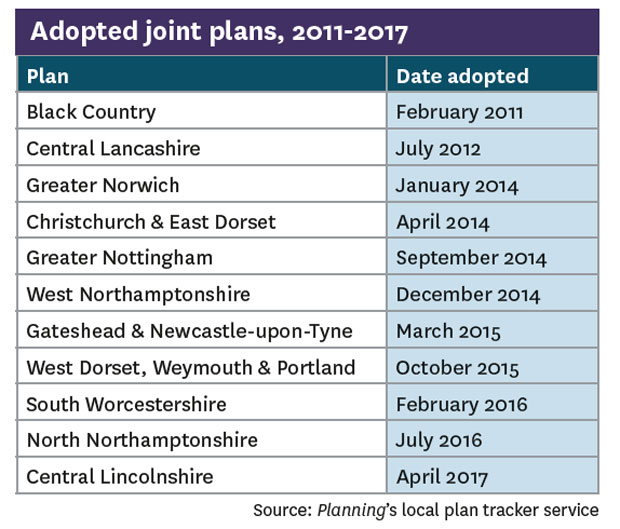 Yorkshire and Humberside: Inspector William Fieldhouse has endorsed Hull City Council's local plan. In a report published last month, the inspector found that provided modifications were made the plan would provide an appropriate basis for the planning of the city.

South East: Inspector David Hogger has found Adur District Council's local plan sound. The document sets out a housing requirement of 3,718 homes up to 2032, against an objectively assessed housing need of 6,825.

South West: Inspector Elizabeth Ord has concluded that the Gloucester, Cheltenham and Tewkesbury joint core strategy (JCS) provides an appropriate basis for the planning of the three districts up to 2031.

Greater London: The London Borough of Hackney is consulting on its draft local plan until 4 December. The document says that the council will create the conditions for growth to deliver up to 30,000 new homes between 2018 and 2033.

South East: Wycombe District Council has published its draft local plan for consultation until 27 November. The document proposes to deliver more than 10,900 homes over the plan period.

South East: South Oxfordshire District Council has published its emerging local plan for consultation until 30 November. The document says that provision will be made for around 3,750 new homes to meet part of Oxford city's unmet housing need.