A relaxation of planning rules intended to boost rural housing supply without building on the countryside has not progressed as smoothly as ministers might have hoped. More than three years on from its introduction in April 2014, the agricultural-to-residential permitted development (PD) right - known as Class Q - continues to be a source of frustration to farmers and landowners in rural areas. More than 9,200 decisions have been made under the right since its introduction, but refusal rates remain stubbornly high. This comes despite revisions to guidance in 2015 intended to overcome suggestions that, in the early days of the regime, some authorities had not been following regulations in blocking more than half of bids to use the rights.

For rural lobby groups, the figures - which also show a slight dip in the number of prior approval decisions in the most recent quarter - are a source of concern. They lay the blame squarely at the door of councils, who they say do not support the PD right. "They will make any excuse they can find," says Fenella Collins, head of planning at the Country Land and Business Association, which represents rural land and business owners. Suzanne Clear, the National Farmers Union's senior planning and rural affairs advisor, says that the drop in decisions suggests there is a perception that because some local authorities do not support the PD right, it is therefore "not something farmers will do, even if they need more homes on their farm".

But for Steve Ingram, president of Planning Officers Society, a local authority membership group, authorities are dealing with poor quality proposals. "Well thought-out proposals will be far easier to deal with and support than those which are not," he says. "If local authorities are concerned about safeguarding the character of the countryside, it is totally right for them to challenge poor quality development," he says. James Podesta, head of planning at consultancy Rural Solutions, adds: "This is one of those areas where people might think they can do it themselves. But if it's an individual accessing the planning system themselves, the application might not have the technical details required."

What all commentators agree on, however, is that the complexity of the rules governing the agricultural-to-residential PD right is an issue. While other PD categories tend to have a limited number of prior approval criteria to test applications against, applicants using Class Q have to face many more potential pitfalls, including six prior approval tests and a series of conditions. "The matters on which prior approval is required are more draconian," says Collins. Clear adds that recent NFU research found that farmers felt it more difficult to get permission through Class Q than other agricultural PD rights. "The amount of information required was in excess of what would be required in quite a few planning applications," she says.

The new Planning data report, which analyses nearly 450 local authority Class Q refusal notices (see table, below), found that the most commonly-cited reason for refusal - given in half of cases - was on siting and location grounds. The next most commonly-cited reason, mentioned in 35 per cent of refusal notices, related to structural integrity - the right only allows works that are "reasonably necessary" to facilitate such conversions. In third was a test relating to the use of the site. The right does not apply where the site was not solely in agricultural use at the cut-off date of 20th March 2013 or, if earlier, when it was last in use.

But data on appeals shows that, despite the high refusal rates, planning inspectors are not disproportionately overturning councils' decisions. An analysis of a sample of Class Q appeal decisions collated by Planning's sister service DCS over the three years since the right was introduced shows that, on average, 31 per cent of agricultural-to-residential prior approval refusals are overturned on appeal. In 2017, 35 per cent of the 31 appeals logged so far were allowed. Though higher than the 24 per cent of minor housing appeals allowed in the first quarter of 2017/18, the figure is lower than the 38 per cent for major housing appeals in the same period.

Some of the prior approval criteria have led to confusion and disagreements between applicants and authorities. But over time, following the publication of revised guidance and a series of legal rulings, the picture has become clearer, experts agree. An early battleground was the location of the building, with a number of prior approval applications being knocked back by authorities on the grounds that sites were too isolated. But guidance published in March 2015 made clear that, should an agricultural building be in a location "where the local authority would not normally grant permission for a new dwelling", this is not a "sufficient reason for refusing prior approval".

Another area of confusion has been structural integrity, with Class Q applicants required to prove that the works required to make a building suitable for a new use would not be so extensive that the process constitutes a rebuild rather than a conversion. Podesta says that there's a "subtle difference" over whether a proposal amounts to a conversion or a rebuild. "If you have four poles and a roof, are you converting it or rebuilding it?" he muses. This issue came before the High Court last year in the Hibbitt judgement, which experts say has made it much harder for agricultural buildings with few structural elements to win approval for conversion to housing. Ingram says that the case "has done a lot to help arguments about what is a conversion and what is a rebuild".

Figures show wide variations in local authorities' attitudes towards Class Q conversions. According to the new Planning data report, some authorities, including Reigate and Banstead in Surrey, West Lancashire and East Hertfordshire, have very high refusal rates of more than 75 per cent (see table, below). In a statement, East Hertfordshire Council said that it was initially of the view that many of the proposals could not be supported due to an "inconsistency between the regulations and government guidance" and that, to test this position, it had unsuccessfully challenged a related appeal decision in the High Court. "The ruling has now clarified matters and it is likely that approval rates in East Herts will be comparable with other areas in the future," the statement said.

In a statement, West Lancashire Borough Council, which refused 83 per cent of applications in the three years to March 2017, said that it does not have a policy of resisting agricultural-to-residential PDR applications. However, it added that Class Q is very specific in terms of the conditions that need to be complied with. "Unfortunately, many of the applications received by the council have not complied with the legislation and consequently the council has had no option but to refuse them," the statement said.

But in other districts, such as Eden, Cumbria, where only 10 of 177 decisions have been refusals, authorities appear much more receptive. David Wright, Eden District Council's planning development manager, says that while the PD right is "at odds with its local plan", the guidance is "quite clear on what is considered acceptable and what is not". In Eden, Wright says, a lot of the barns are robust enough to be converted to residential properties. "We would much rather see them maintained and used for generations to come because they have become part of our landscape," he adds.

With plans in the pipeline for the government to relax rules further to allow conversion of agricultural buildings with a floorspace of up to 750 square metres to a maximum of five new dwellings, arguments over barn conversions are likely to rumble on. But for Ingram, such proposals should really be subjected to the rigour of the planning process, so that they can be properly scrutinised, the local community engaged, and occupancy conditions imposed to ensure rural workers and local people benefit. "We live with bad planning decisions for a very long period of time," he says. 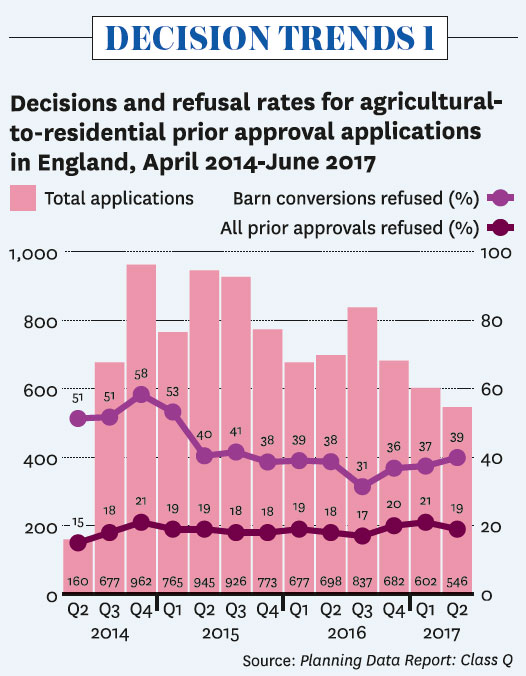 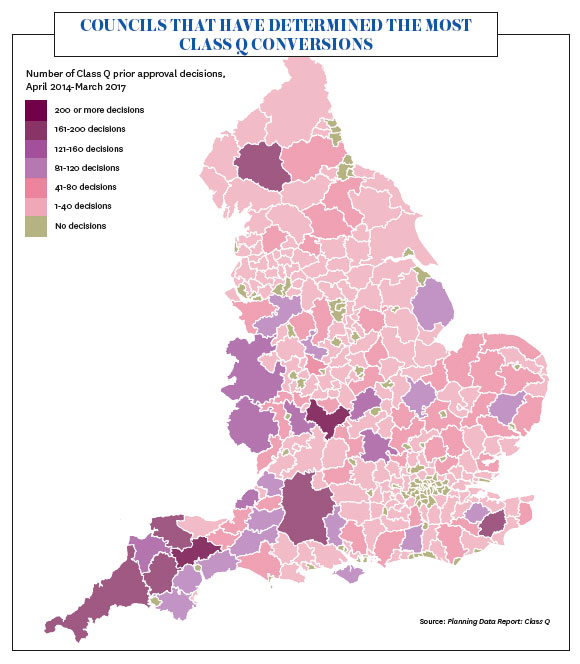 The report contains essential information for:

1. Those considering applying for conversions under Class Q rights. The report provides exclusive information on every English local planning authority's record of receptiveness to such conversions.

2. Those considering appealing against refusal of one of these prior approval applications. The report provides exclusive information that will help guide their decision on whether to appeal and how to appeal, including:

- How frequently applications refused on the same grounds (eg location, noise etc) as theirs was refused have been overturned nationally, and in that LPA (plus where to find decision letters for successful appeals against such refusals)

3. Local planning authorities in receipt of such applications or subject to such appeals. The report provides exclusive information that will help them make robust, defensible decisions.

PLUS All parties involved in applying for such approvals or determining such appeals will also benefit from the report's introduction to planning policy and guidance on agricultural-residential conversions, plus an update on the latest policy and legislation developments