An analysis produced by consultancy Lichfields last week made the case that, in the Cardiff City Region, recent household projections risk undercutting the area's economic growth plans if they end up being the basis for local plans in the region. Under its City Deal agreement, the Cardiff region will create 25,000 jobs, see output grow five per cent, and get a £1.2 billion public sector investment.

But household projections for the region, based on 2014 numbers covering the period of frail recovery after the recession, suggest a fall in the region's working age population of more than six per cent. Lichfields says this raises the prospect of far fewer homes than needed being built. Gareth Williams, head of the Cardiff office at the consultancy, said: "In the past this area has underachieved. If you use this as a basis then potentially you're locking in this past performance."

But Cardiff is not the only area of the UK with a similar problem, with household projections falling in 2014 across the board compared to the 2011 numbers. Indeed, the problem looks set to worsen in future, with the Office of National Statistics last week reducing population growth projections by 15 per cent for the countries of the UK over the next decade.

So, what does all this mean for areas that have aspirations to turn their economies around? In England the stakes have been raised with the publication in September of the draft standard methodology for calculating housing need. This does not allow authorities to take account of economic factors in the basic number, reducing the previous estimate of housing need in 148 councils, largely in more deprived parts of the country. Can authorities still plan for the housing needed to support economic growth?

Greg Dickson, planning director at consultancy Barton Willmore's Manchester office, who is working on plans for the Liverpool City Region, is concerned that the combination of falling population projections and the standard methodology will provide "cover" for those local authorities that want to reduce their local plan housing numbers. "There are those that very much want to take their allocation, and others that don't. This could be used to water down ambitions, it can be used as an excuse," he said.

Andrew Whitaker, planning director at the Home Builders' Federation, agrees. He said: "Some local authorities will seek to hide behind this (standard methodology)."

Supporters of the government's approach, such as Derek Stebbing of Intelligent Plans and Examinations, said the government has addressed this in the consultation, which states that, where "there is a policy in place to substantially increase economic growth, local planning authorities may wish to plan for a higher level of growth than our formula proposes", specifically referencing City Deals. It also says that inspectors should work on the assumption these types of approaches are sound.

Nevertheless, inspector support cannot be guaranteed. In 2015, inspector Harold Stephens threw out County Durham's proposed local plan in large part because of an "unacceptable risk" over the planned economic growth on which the housing target was based. Stebbing accepts that the standard methodology "raises the bar higher in terms of evidence to demonstrate economic growth is deliverable," but argues this is no bad thing.

Modelling both local economic growth and the impact that it may have on local demand for homes is a very complex task based on a host of arguable assumptions. Stebbing said: "Economic forecasts are at best fragile and at a local level they're fraying at the edges. The experience has been that the link between growth and housing need has at best been seen to be not robust." Cristina Howick, planning partner at consultancy Peter Brett Associates, agrees. She said: "Projected jobs data has been misinterpreted to equate to far higher numbers of homes than are actually required."

Of course, any concern about the robustness of economic projections may make local authorities even more reluctant to plan for more homes, particularly when considered alongside other government policy. Currently a high housing requirement in a local plan puts authorities at more risk of failing the five-year land supply test and thereby making the plan out of date, at which point decisions rest on the pro-development National Planning Policy Framework.

Furthermore, the government's proposal for a housing delivery test means councils could risk the same fate if the number of homes actually delivered are substantially lower than planned for. Mike Kiely, chair of the Planning Officers Society, which represents local authority planners, said: "If you want to be ambitious and plan for higher numbers then the housing delivery test makes this a very big risk locally."

For Howick this risk local authorities will be "punished" if they fail to meet understandably ambitious growth targets justifies the approach of taking economic considerations out of the standard methodology. She advocates a half-way house to stop this problem "killing aspiration" in deprived places. She said: "You need to be able to make a clear distinction in a plan between what is aspiration and what is genuine need. The need is a minimum but you can also have aspirational targets which are higher." 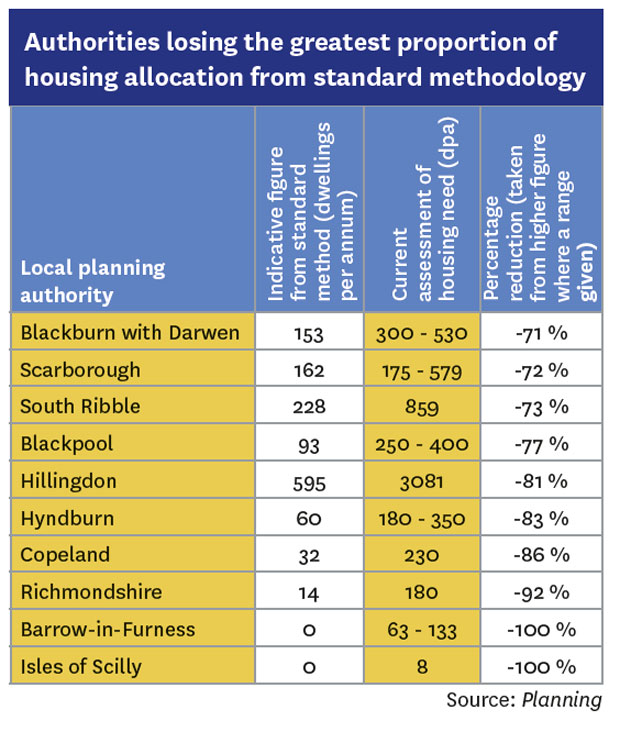