According to new research produced by Shelter using freedom of information laws, viability assessments produced by developers which successfully argued that local authority affordable housing targets would make their developments unviable, resulted in 2,500 affordable homes (79 per cent) lost from the number that would have been supplied had council targets been met.

According to Shelter, the three London councils were selected "to represent the distinct housing markets found in outer London, inner London and ‘prime’ central London".

Shelter said that the use of viability assessments to cut affordable housing provision means that developers "face no penalty for over-paying for land because they can recover the costs by reducing their commitments to building new affordable homes".

The charity said that closing the viability "loophole" would provide developers with "certainty about the number of affordable homes to build".

"This would be part of the cost of doing business for all developers meaning they would not need to overpay for land to stay competitive in the first place. Developers playing by these new rules would still be able to make good returns, while providing their share of affordable homes", Shelter said.

Shelter chief executive Polly Neate said: "The government needs to fix our broken housing system – and it must start by closing this loophole to get the country building homes that are genuinely affordable for people on middle and low incomes to rent or buy."

Click here to view a larger version of the table below. 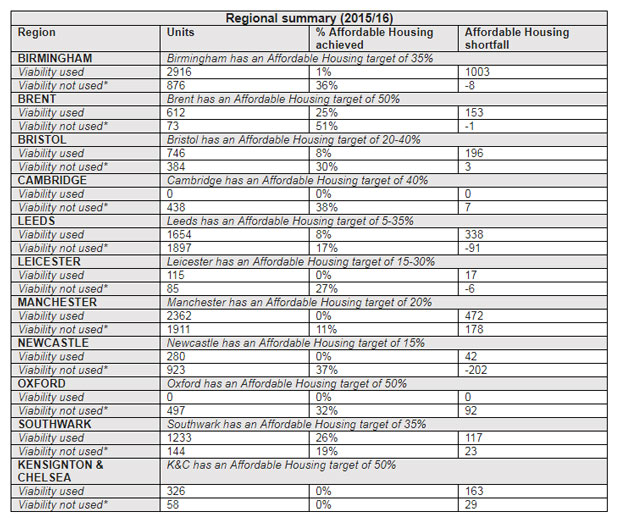 The terms viability "used" or "not used" in the above table denote where developers used viability assessments to successfully reduce affordable housing obligations.

The full Shelter report can be read here.