The research, passed to Planning this week, also highlights 14 cases involving some 2,500 homes in which Javid refused permission against inspectors’ recommendations. All but one were in Tory-held constituencies. The exception was Speaker John Bercow’s Buckingham constituency, where plans for 130 homes were refused in July following a call-in inquiry. "If the system is leading to the secretary of state looking more closely at his supporters’ seats, that issue will continue to influence his successors until it is addressed," said Dyer.

Closer analysis of the figures shows that those 2,500 homes accounted for around 15 per cent of the total units proposed in schemes decided by Javid. During his tenure, he has endorsed inspectors’ recommendations to refuse 25 schemes collectively comprising around 6,000 homes but approved 28 schemes providing more than 8,000 units. In only two cases, including a 750-home development in Lichfield approved this February, has he gone against an inspector’s recommendation to refuse permission.

Dyer voiced frustration at growing ministerial intervention on housing schemes since the 2015 election. He suggested that the recovery threshold for ministerial intervention, currently set at 150 units outside neighbourhood plan areas, should be raised to something like 1,000 homes: "Below that, the government should leave well alone," he said.

Conflict with emerging or adopted neighbourhood development plans (NDPs) featured in eight of the 14 schemes refused against inspectors’ advice. "It appears that the secretary of state is giving more weight than his inspectors to neighbourhood plans. These are certainly more popular in the south of England, where the Conservatives have more seats. It’s crazy that ministers are getting involved in schemes of a few dozen homes," said Dyer.

The high percentage of decisions in Conservative seats is a function of England’s political geography and the significant weight the government attaches to NDPs, said Matthew Spry, senior director at consultancy Lichfields. "Conservative seats are focused more in rural areas, so it’s more likely they will encounter greenfield schemes that attract call-in or recovery. It’s the same with NDPs – 79 per cent of made neighbourhood plans are in Conservative-controlled councils, but these make up only 54 per cent of all councils."

David Bainbridge, a planning partner at consultants Bidwells, pointed to a correlation between high housing demand, constrained land supply and political governance. "Conservative controlled councils in the South East and East of England are subject to significant growth pressures." In that event, he said, "the more vocal and motivated opposition will use political connections to assist their case". He added: "If local politicians support the proposed development, ministerial intervention is less likely. But many of us have the feeling that more appeals are recovered, or at least that more are refused, in the run-up to a general election."

Simon Neate, a director at consultancy Indigo Planning, said the preponderance of ministerial interventions in Tory seats revealed by the Irwin Mitchell research is probably due to better links between residents and their MPs and ministers in rural or semi-rural areas with environmental and landscape protection. "Conservative-minded people are likely to be conservative in other respects and more likely to object. Attractive places attract civic-minded people anxious to protect local amenities and often well equipped to do something about it," he said.

Commenting on the key findings from the Irwin Mitchell study, a Department for Communities and Local Government spokesman said: "The secretary of state, in considering called-in applications and recovered appeals, will always focus on the merits of the individual cases before making a decision, having full regard to the inspector’s report. His role is to reach a view based upon his consideration of the facts."

Separate research by Indigo presented at last week’s Planning for Housing conference, organised by Planning, indicates that the proportion of appeals dismissed where councils could show a five-year housing land supply increased from 14 per cent in January 2016 to 25 per cent this August. The research also revealed that the overall number of homes allowed on appeal decreased from 34,000 in 2015/16 to 28,000 in 2016/17, with a further drop predicted in 2017/18. But Neate said this was "more than compensated for" by a rise in the number of homes approved by local authorities. The DCLG has been approached for a statement.

Click here to see an elarged version of the map below. 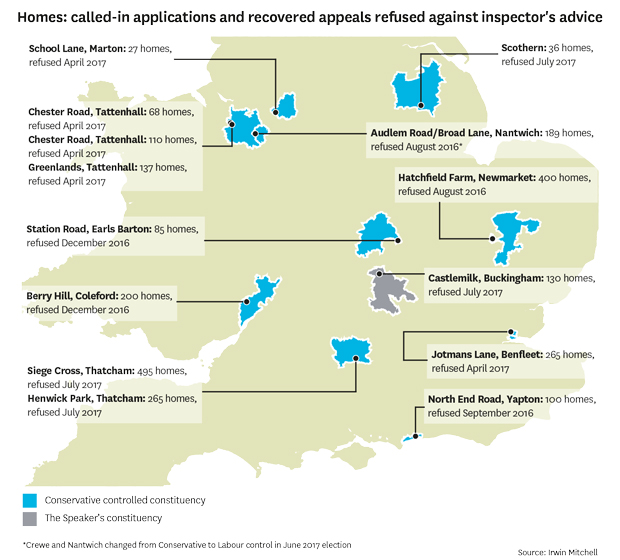