Wandsworth Council has criticised the proposals for the second version of the pan-London mayoral levy (MCIL2), which is designed to help fund the construction of the planned Crossrial 2 rail link between south-west and north-east London.

Lambeth Council has also criticised the plan to introduce the higher charges as soon as April 2019.

A second round of consultation on a draft charging schedule is due prior to MCIL2's adoption. 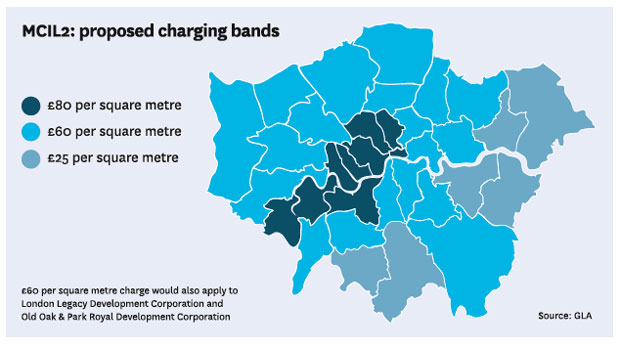 Staffordshire: Tamworth Borough Council submitted its CIL draft charging schedule for examination on 25 August. The draft schedule, which was submitted alongside a statement of modification, outlines an increased rate for small-scale residential developments of £68 per square metre.

Cheshire: Cheshire East Council has launched a consultation on a draft charging schedule. The schedule, which is out to consultation until 6 November, outlines a range of rates including up to £168 per square metre for new homes in rural areas in the north of the borough.

Buckinghamshire: A referendum held on 21 September on whether Milton Keynes Council should make the Castlethorpe neighbourhood plan received a 'yes' vote of 92.8 per cent, on a 43.2 per cent turnout.

Buckinghamshire: A referendum held on 21 September on whether Milton Keynes Council should make the Sherington neighbourhood plan received a 'yes' vote of 97 per cent vote, on a 49.1 per cent turnout.

Leicestershire: A referendum held on 7 September on whether Rutland County Council should make the Greetham neighbourhood plan received a 'yes' vote of 90.7 per cent. The turnout in the referendum was 44.2 per cent.