The Welsh system of developing joint housing land availability studies (JHLASs) was last year lauded for its collaborative approach by a UK government-commissioned group tasked with recommending measures to improve the plan-led system in England.

Last year’s Local Plans Expert Group report said that there was "significant merit" in the introduction of a system "broadly comparable" to that introduced in Wales, under which JHLASs – drawn up by council planners working alongside local housebuilders and other stakeholders involved in housing development – are required to be produced on an annual basis. The recommendation was picked up by this year’s Housing White Paper, which pledged to give authorities in England the opportunity to have their housing land supplies agreed on an annual basis, and fixed for a one-year period.

However, in practice, most Welsh councils are struggling to maintain a five-year supply. In April 2015, eight of 25 Welsh authorities were able to demonstrate a five-year supply of land for housing. This fell to six in 2016. Of studies completed so far in 2017, only two have found a five-year supply, according to latest Home Builders’ Federation (HBF) figures.

A note published with the latest five-year supply figures, released by the Welsh government last month, attributes the fall to local authorities allocating sites for housing which are "essentially undeliverable", or only likely to come forward at later stages of the Local Development Plan (LDP) period. The note adds: "Viability was identified as a key reason for delays in delivery, covering issues such as affordable housing requirements, sites being located in low value market areas, poor quality sites or specific infrastructure requirements."

Roisin Willmott, director of the Royal Town Planning Institute (RTPI) in Wales and Northern Ireland, agrees, noting that some LDPs have been adopted for a number of years and that the economic conditions they were developed under have changed. "This is leading to issues with deliverability of some sites. Developers have sites that they probably wouldn’t have purchased under current economic conditions and this affects their deliverability too," she said.

Other commentators concur. Paul Williams, associate director in property firm Savills’ Cardiff office, said: "There’s a legacy of sites that are in the wrong locations. For example, Caerphilly and Rhondda Cynon Taf have lots of allocations in northern valleys on brownfield sites, which are not popular with developers."

Mark Harris, planning and policy advisor for the HBF in Wales, said that although all authorities in Wales except Flintshire, Wrexham and Swansea have an adopted LDP, 11 LDPs are due to expire in 2021. "These LDPs are coming to the end of their shelf life. When you have a new LDP you get a lot of building. But as you get into the plan period, some sites turn out to be unviable," he said. So far, only a handful of local authorities whose LDPs are due to expire in 2021 have begun the process of reviewing their plans, he pointed out.

The HBF has been tracking this year’s JHLASs as they have been published. So far, seven authorities have been unable to undertake studies due to a lack of adopted plans, or plans that were not adopted in time for the 1 April base date for 2017 JHLASs, and four studies have yet to be determined. Of those that have been, only two – for Neath Port Talbot and Newport – have demonstrated more than five-years’ housing land supply.

There is a theoretical threat that councils’ inability to demonstrate a five-year supply will encourage developers to submit speculative planning applications for unallocated sites, as is the case in England. Gareth Barton, associate director at consultancy Turley, said that there is potential for this to happen. "If developers see appeal decisions going the right way, they might be tempted to try," he said.

However, there is not much evidence so far that this is happening in practice in Wales, according to commentators. "Based on a number of recent appeal decisions, this does not seem to be the case, as housing proposals have been dismissed despite there being a lack of five-year land supply … because of other policy constraints," Harris said.

According to Williams, a lack of housing land supply in Wales is not given the same weight in planning policy as it is in England.

Some local authorities have responded to being unable to demonstrate a five-year supply by working proactively to bring forward sites that are not allocated in LDPs, Barton said. "Some local authorities are better than others at this. They have taken a more proactive view that if you have a site that perhaps doesn’t fully accord with an LDP, but is generally acceptable on most grounds, they’ve accepted that supply isn’t where it should be and have bought those sites forward," he explained.

Harris also observed this trend, though he added that in some cases, councillors have still refused applications against the advice of officers.

The RTPI’s Willmott said that "an important factor underpinning this issue is the need to have resourced planning authority services, including policy teams". "Planning services have seen cuts of 53 per cent that are proportionately the highest of any local government service," she said. 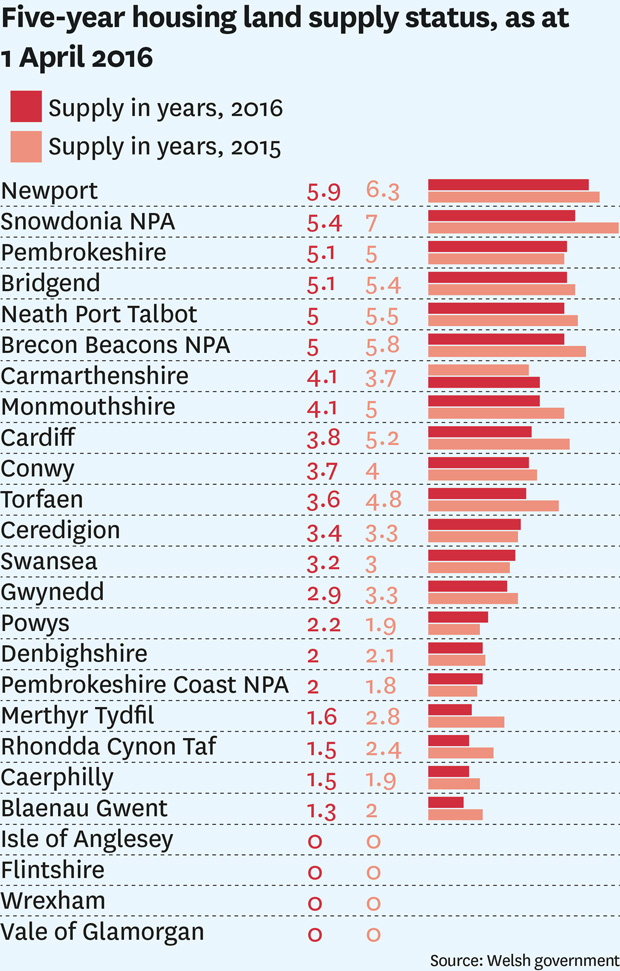