Since 2011, government policy has made the delivery of new energy infrastructure an urgent priority. However, despite the strategic national importance of these projects in keeping the UK’s lights on, promoters are still required to extensively consult local communities during the planning process.

The challenges raised during consultation on such projects were recently highlighted by electricity infrastructure owner National Grid’s proposal to create a new 60km electricity transmission line in Somerset, to serve the planned new Hinkley Point C nuclear power station. According to National Grid and its adviser, law firm Bircham Dyson Bell (BDB), this flagship project is the largest new electricity transmission project consented in England for decades and one of the biggest to have been considered under the Nationally Significant Infrastructure Project (NSIP) development consent regime.

In January 2016, former energy secretary Amber Rudd gave the project the go-ahead after a six-month examination that included 17 hearings and 857 written questions from the five planning inspectors. The planning permission was the culmination of six years’ work by National Grid and BDB’s infrastructure planning team. Their work was recognised when it won the 2016 Planning Award for energy infrastructure planning, with judges singling out its "innovative use of planning and consultation" for praise.

When it came to consultation and engagement, the first challenge the team faced was the scale of the project, says Sarah Clark, BDB planning and infrastructure partner. Most development projects are based on a relatively constrained site area, she says, making it easy to identify the parties that need to be consulted. "Here, we had to deal with individuals along the whole route," says Clark. "The scale of the challenge becomes quite difficult to manage."

Similar challenges arose when it came to the acquisition of land needed to site pylons along the new transmission route. Compulsory purchase laws require developers to seek agreement with landowners before embarking on proceedings. "If you have a single site you might be dealing with a handful of landowners," Clark says. "On this project we were dealing with hundreds."

To avoid compulsory purchase, the firm tried to negotiate voluntary agreements with affected landowners, Clark says. To this end, it set up an online case management system to speed up the process, resulting in most of the land purchase agreements being secured before the examination closed. "Few landowners objected to the proposals," Clark adds.

Simon Best, National Grid’s in-house lawyer, also points out that NSIP applications, in contrast to conventional planning applications, are front-loaded, which encourages promoters to work through any issues and objections at the earliest stage. This meant explaining to local communities the reasons why the project was considered to be vital. "We had to come up with an approach that took people along from the beginning," says Clark.

A key issue from the start was the issue of whether to opt for overhead power lines or underground ones, she adds. According to BDB, National Grid was criticised in the early stages of the project’s development for too much of a focus on overhead power lines. Partly in response to this and to concerns raised by communities and councils in the consultation, Clark says, the decision was made to use "different technologies in different communities". This involved moving lines underground in sensitive areas – including more than eight kilometres of new connection through and either side of the Mendip Hills Area of Outstanding Beauty and a further eight kilometres of the existing line. National Grid also announced the pioneering use in some areas of new T-shaped pylons (below) that are 10 to 15 metres shorter than the traditional lattice towers. 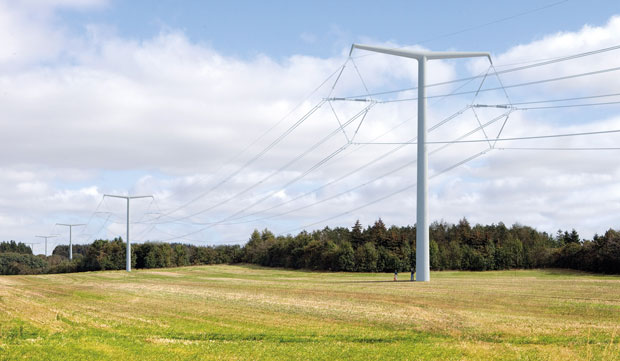 Furthermore, consultee involvement also helped shape the route of the proposed line, an issue that proved to be the most sensitive part of the consultation process, says Clark. "National Grid had to make a decision based on a number of factors, including minimising environmental effects and the cost, taking into account the views of bodies like Natural England and local authorities," Clark says. "When you get nearer to Bristol, you are talking about a significantly built-up area and businesses are affected."

Due to the difficulty of deciding objectively what would be the "best" route, the National Grid team worked with the Planning Inspectorate (PINS) to include alternative options – a first for a DCO application. In the Portbury and Portishead area, two choices of route was presented. Rudd backed the second option, following the recommendation of the PINS examiners, because it "should give rise to the least harm overall".

By the end of the process, the efforts to undertake consultation proved their worth. The number of written representations to inspectors (which usually but not invariably present objections) was only 150. In comparison, a similarly large linear project like London’s Tideway Tunnel received more than 1,200 representations, says Clark.