In recent years, both councils and developers have grown increasingly concerned about the lack of money and staff available to council planning teams following ongoing local authority budget cuts. Last year, the government showed signs of having been listening. A consultation in February 2016 reported: "We have heard for some time cross-sector concerns that local authority planning departments may not have sufficient resources to provide an effective service."

An increase in planning application fees was floated as a possible solution. The prospect received widespread support, with a majority of respondents "from all sectors" found to be in favour of such a move. In February this year, the government's housing white paper outlined more details. Councils would be allowed to increase fees by 20 per cent, while a further 20 per cent rise would be offered to authorities "who are delivering the homes their communities need".

Two weeks after the white paper's publication, on 21 February, the proposal became more concrete when the Department for Communities and Local Government (DCLG) wrote to local authorities across England asking for expressions of interest in adopting increased fees. Crucially, the letter stressed that any additional revenue raised had to be ploughed back into the planning service. "This is an opportunity for all authorities to make improvements to their resourcing, leading to better services, improved performance, and greater capacity to deliver growth," the letter read.

Last month, Planning joined forces with the Planning Officers Society (POS) to survey senior local authority planning officers about the likely impact of an increase in fees. We received 71 eligible responses. Respondents overwhelmingly said they had accepted the government's offer and expected to see income rise as a result. Most said they would use the money to take on additional planners. However, there were also concerns about aspects of the policy - not least the ongoing uncertainty about when it is due to take effect. 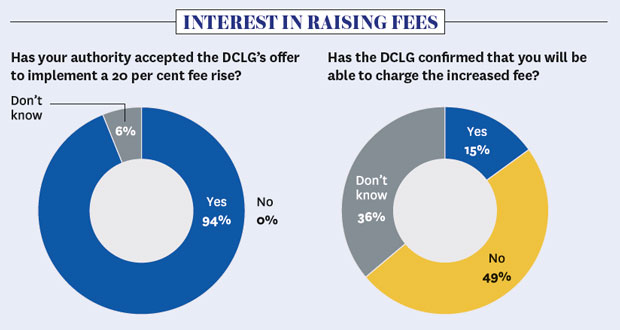 According to our survey, the DCLG letter received an enthusiastic response. Ninety-four per cent of respondents told us they had accepted the government's offer. Three-quarters of all those surveyed said they expect to see an increase in fee income per year of between £50,000 and £200,000. On average, fee income is expected to rise by £155,000 a year. The median figure is slightly less, at £142,500.

Steve Ingram, the new POS president and strategic director for development and growth at South Kesteven District Council, says increased fees would be welcomed by public and private sector alike, both of which had lobbied for the move. "That is the pertinent point - (lobbying came from) across the development industry," he says. Ingram says that the extra income won't solve all the budget challenges facing local authorities, but welcomes this "minor recognition of the resourcing issue". Others echo Ingram's view. "It'll go some way," says Paul Seddon, senior POS vice-president and chief planner at Nottingham City Council, who noted that the £155,000 per year could translate into two or three additional members of staff.

Some authorities expect to receive much higher income boosts. Westminster City Council reported an estimated £430,000, the second-highest in the survey. John Walker, its director of planning, says this is due to the high number of applications they receive - about 12,500 a year. 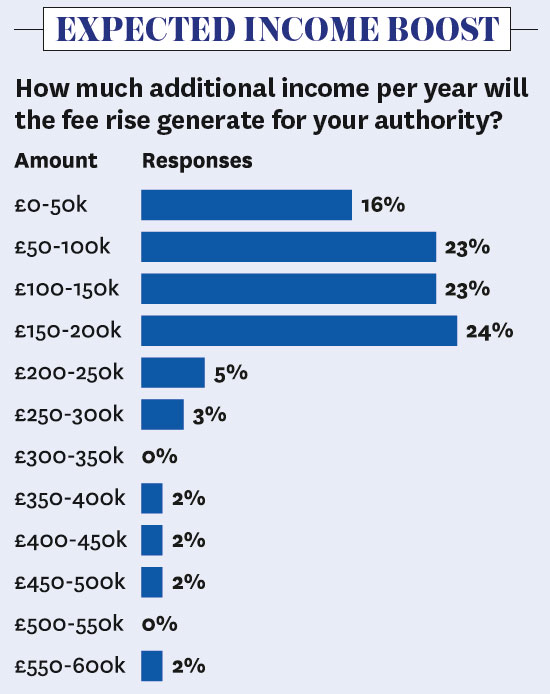 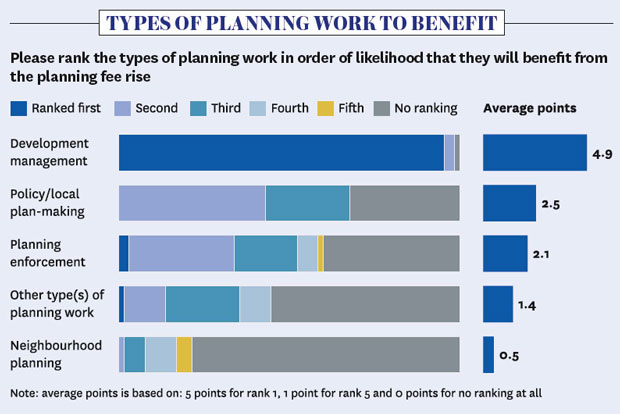 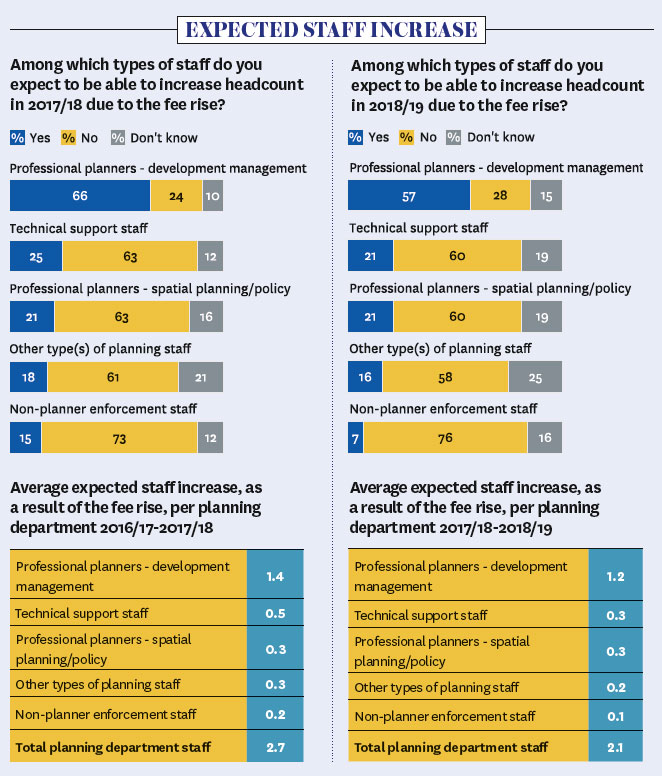 Councils overwhelmingly indicated that development management would be the focus of any additional spending enabled by the fee rise, with 95 per cent of respondents ranking it as their number one priority. Ingram points to the government's threat of sanctions for councils that fail to meet development management targets as one factor behind this trend. "Development management is at the coalface and where the pressure is most acute," says Seddon. "But it's also where we've seen an uplift in workload. It's where we need those feet on the ground." For Nottingham, Seddon says: "The priorities will probably be about two-thirds into development management and one-third into plan-making."

Echoing this, two-thirds of respondents said they expected the fee increase to allow them to hire more development management planners. Respondents reported that an average of 1.4 full-time equivalent development management posts would be created in 2017/18 as a result of the fee rise. Only a minority of respondents said that they were likely to hire each of the other types of planning staff, including plan-making and enforcement officers, as a result of the fee rise.

However, policy and plan-making should also receive a resourcing boost at some authorities, according to the survey. Among types of planning work expected to benefit from the fee rise, this area was cited as the second most important priority by planning chiefs, closely followed by enforcement. "We will be using some of the funds to extend contracts in plan-making and enforcement where resources are stretched," says Andrew Dobson, chief officer of regeneration and planning at Lancaster City Council. "I take the view that all parts of planning delivery have the same priority, especially with new sanctions in the recent Housing and Planning Act over plan-making delays." Similarly, Walker says: "We are fast-tracking the new local plan, so it would make sense, if we do get the money, that at least some of it will go towards a policy officer or two to help with that plan-making process." 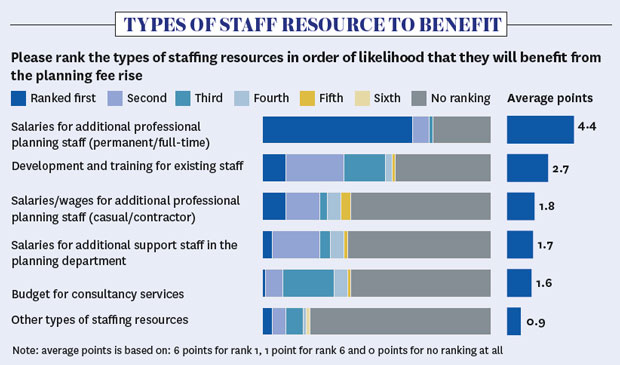 We also asked about the types of staffing resources in which planning chiefs were most likely to invest, using revenue from the planning fee rise. Overall, two out of three respondents identified permanent professional planning staff as the most likely target for investment. The second-most popular option was investing in development and training for existing employees, followed by paying for casual or contract-based planning staff. Philip Ridley, head of planning at Suffolk Coastal and Waveney district councils, said employing full-time permanent members of staff was his preferred option "because if they stay for a period of time they get the knowledge, they know the developers and culture, which will give added value over time."

Respondents reported an expected average increase of 2.7 full-time equivalent posts in their planning departments in 2017-18 and 2.1 in 2018-19. More than half of the new posts in 2017-18 would be for development management planners and just under one in five would be for technical support staff. Some councils said they expect to hire more. Nottingham City Council, for example, said it expected to hire four staff this year and the same next year.

However, the prospect of a recruitment drive has raised concerns in some quarters about the number of candidates available to meet demand. "There is almost a missing generation of planners," says Seddon. "Councils will, all at the same time, look to try to expand their capacity and there is only a limited number of people out there with the skills that we need. The thing most of us will want are experienced, hit-the-ground-running, skilled negotiators who can deal with major applications."

Alice Lester, head of planning at the London Borough of Brent, says the authority "would certainly be looking" to spend the additional income from the fee rise on more planning staff. But she says she has already experienced challenges trying to recruit at the principal level. "It's all very well having the money for extra staff, but recruiting staff of the right quality is very difficult," she says. "The shortage of experienced planners has been broadly recognised across the sector and, in London, competition for experienced planners is high."

Ridley says the lack of experienced candidates could mean any benefits from the rise in fee income taking some time to arrive. He calls for planning departments to invest in their existing staff and to consider offering apprenticeships to address the skills gap facing the sector. "Not every authority can recruit development management staff now," he says. "We've got to get more people into the profession."

Others suggest they may be forced to use any additional income more creatively. Lester says: "If I'm unable to recruit experienced planners, I will look to spend it on other ways, whether it's IT improvements or additional support staff." 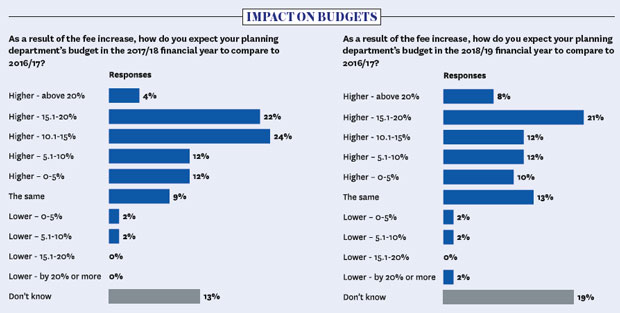 Overall, councils told us they were confident that planning budgets would rise as a result of the fee increase. Slightly more than half of all respondents - 50.7 per cent - said they expected their 2017/18 budgets to rise by more than ten per cent compared to the previous year. The median option was a rise of between 10 and 15 per cent. Only three per cent said they expected budgets to fall, while nine per cent expected them to stay about the same.

Westminster City Council was one of the few councils to say that it expected its budget to remain the same this year, and reported that it would fall by more than 20 per cent next year. Walker warns planning heads against taking any extra income for granted, despite the strict conditions in the DCLG letter on returning the additional money to planning teams. Walker says any extra cash could be offset by cash-strapped councils making cuts in other funding provided to their planning departments: "I don't think it's a guarantee that the full amount of the increase will be passed on to additional staff," he says. "Some authorities will use it to offset savings being imposed on them."

In addition, Walker raises concerns that certain applications, such as for listed building consents, are to remain exempt from charges. "We get 2,500 listed building applications a year," he says. "For authorities that get a lot of these applications, the fee increase does absolutely nothing." He adds that the 20 per cent increase is underwhelming. "It's welcome, but it just doesn't go far enough," he says. "The government should allow local authorities to set their own fees."

A question of timing

When the housing white paper was published in February, the government stated that councils would be able to increase fees from July. That target now looks unlikely to be met. Almost half of councils in our survey said they were yet to receive confirmation that they would be able to claim the increased fee. "We wrote back to say 'yes please'," says Lester. "We haven't heard anything back."

POS has called on the government to end the uncertainty, with support from the Association of Directors of Environment, Economy, Planning and Transport, which represents senior officers in upper tier local authorities. Last week DCLG responded by saying that it would publish more details "in due course". Many authorities have adopted a wait-and-see approach, anticipating the potential for delays. With parliament's summer recess fast approaching, Walker now believes the fee increase is unlikely to be introduced before October. "I never believe anything before I see the statutory instrument laid before parliament," he says.

Rather than providing a boost to planning teams, some councils may now find themselves in a difficult position. "People who moved forward on the assumption that it was an absolute and have built it into their budget obviously have a challenge now," Ingram says. Nevertheless, after several years of cuts to planning budgets, the fee rise will be welcomed if it arrives as promised. "It is a small step in the right direction," Ingram says.