This year, the so-called 'Gummer's Law' - the planning policy that justifies building high-quality homes in the open countryside - celebrated its 20th anniversary. In February 1997, paragraph 3.21 of Planning Policy Guidance Note 7 (PPG7) came into force, allowing for new isolated homes in the countryside if they were of "truly outstanding" design. The policy became known as 'Gummers' law' after its author, the former Conservative environment secretary John Gummer, now Lord Deben. The policy stipulated that an isolated new house in the countryside would "exceptionally be justified" if it was clearly "of the highest quality, is truly outstanding in terms of its architecture and landscape design, and would significantly enhance its immediate setting and wider surroundings".

Lord Deben says his rationale was to provide some flexibility in planning policy to reflect the importance of the "great" country house, which he describes as "one of the great contributions of Britain to art and architecture". It was a tradition he wanted to continue with the policy, explicitly stating within the document that "each generation would have the opportunity to add to the tradition of the Country House" as Lord Deben was concerned the country had "a planning system which meant that there wouldn't be any more". But he recalls that there was "huge opposition" to it at the time. "People were frightened because it was different and had not been done before," he says.

The publication of the draft PPG7 in 1996 prompted a strong reaction among Planning readers and contributors. In a comment piece, one environmental planning consultant said the policy was "elitist", suggesting it could be a "loophole for a millionaire". The Royal Town Planning Institute also opposed the policy, voicing concerns that local planning authorities would face "significant numbers of applications from developers claiming to meet these criteria".

With Labour coming to power just three months after PPG7 was published, Gummer's Law came under immediate pressure. When the Blair government reviewed the guidance for rural areas in Planning Policy Statement 7 (PPS7), the first draft omitted the clause. But, following a concerted campaign by the Royal Institute of British Architects (RIBA), among others, the final version of PPS7 - published in 2004 - reinserted the clause, albeit in modified form. Instead of highlighting the tradition of country houses, paragraph 11 of the statement emphasised that proposals should meet the "highest standards in contemporary architecture" and show "exceptional quality and innovative nature" in their design. This iteration of the policy also encouraged schemes to incorporate low carbon technology such as 'Passivhaus' design.

However, it changed the exact instruction to one that design should be "truly outstanding or innovative".

While there are no statistics available for the number of houses applied for or permitted under the policy, practitioners say that overall numbers are low, with the number built even lower due to the very expensive nature of the projects. Some of the boldest designs have never even seen the light of day. For example, footballer Gary Neville's controversial semi-underground eco-house on green belt in Lancashire hit the headlines when it was approved by Bolton Council in 2011. Its futuristic petal-shaped design and submergence into a hill prompted comparisons to the house used by children's TV characters the Teletubbies. But the plan was abandoned, according to Neville, because of local opposition. 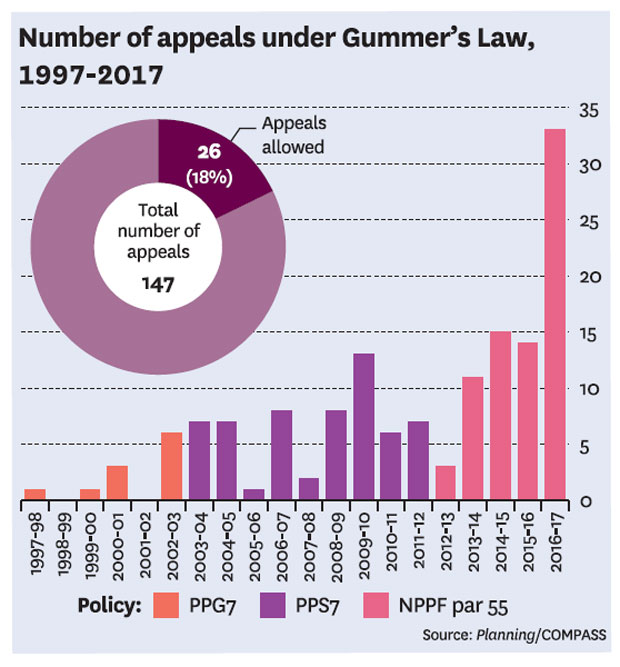 Though there is no information on applications, exclusive research by Planning using our sister service Compass's appeals database indicates growing interest in the policy over the past two decades. It reveals that there have been 147 appeals that cited Gummer's Law since it was introduced, with 26 of these allowed. Appeal numbers have grown rapidly in recent years, from an average of three per year under PPG7 to six per year under PPS7 to 15 per year under the NPPF. Appeals in 2016-17 grew markedly to 31 - the highest ever level - up from 14 the previous year (see infographic, above).

Robert Hughes, principal planner at Hughes Planning, a consultancy that specialises in paragraph 55 schemes, says the increasing numbers of such schemes are a result of a higher media profile including programmes such as Channel 4's Grand Designs. "The media have picked up on paragraph 55 more than they ever did with PPS7. There is more interest in this kind of development these days, with lots of magazines and TV programmes about the topic."

Ruth Reed, chair of RIBA's planning group and director of consultancy Green Planning Studio, argues that the increasing numbers are a result of "the accelerating value of high-end property and the ability to invest". Architect Richard Hawkes runs a practice specialising in paragraph 55 schemes and also sits on advisory group Design South East's review panel. He says there has been "a massive increase" in such schemes passing through the panel in recent years. "It seems that half the reviews the panel is doing now are paragraph 55 schemes," he says.

However, local authority planners and consultants report that, while there are many enquiries and applications for isolated countryside homes using the paragraph 55 route, these frequently don't meet the required quality standard. "A lot of people seek to promote dwellings under paragraph 55 but they don't necessarily understand the rigour of the policy," says Hughes. In drawing up paragraph 55 applications, commentators say key issues for applicants and planners to grapple with include not only the stiff design test to show "truly outstanding" architecture but also the requirement to set the scheme in the wider site. The stipulation that the scheme must enhance its immediate setting means that landscape architects have a crucial role to play, says Hughes.

For many of these rural sites, the obstacles to be overcome are exacerbated by protective designations such as green belt, Areas of Outstanding Natural Beauty (AONBs) or other constraints. For practitioners, key elements to guide a scheme successfully through the planning process are site appraisal and a thorough design method. "We do development appraisal for every site introduced to us by a client," says Hughes. "It is a sieving process long before you get into any architectural work. The majority of sites I assess end up being a 'no'."

Hawkes says the bar is set even higher for paragraph 55 schemes in green belt due to their potential impact on openness, and in the AONB because of the more limited opportunity to enhance the setting of a site if it is already designated for its natural beauty. "Because it is not normal countryside, it creates another hurdle," he says.

Overall, the approval rate for appeals involving Gummer's Law is around 18 per cent - about half the approval rate for all appeals, which is around 32 to 35 per cent. Hughes argues that this demonstrates the strictness of the policy. "Councils and inspectors do rigorously test proposals against the policy," he says. But he returns to his point that many applicants using paragraph 55 don't understand how tough the test is.

Local authorities' approach to such proposals also varies, commentators say. Whilst most councils are open-minded, according to Hawkes, some oppose paragraph 55 projects from the outset. "It's meant to be a high bar, but a bar that's supposed to be able to be reached," he says.

Gummer's Law has always had its opponents, and still does. "Our view has always been that it is a loophole that needs to be closed," says Paul Miner, planning campaign manager at the Campaign to Protect Rural England. "We don't see any justification for having a particular exemption for large mansions from general policies that rightly should be in place about preventing isolated new houses in the countryside." Miner insists that if the policy is driving higher design standards, then this should be applied to all development rather than isolated homes in the countryside.

But supporters claim the policy has had a positive impact. "With mass house building, we do tend to get a homogenous design in new housing developments, whereas this policy is about being sensitive to the defining characteristics of the local area," says Hughes.

Reed denies that the policy has been a loophole because of the "very few numbers" that get approved each year. She says: "You're only talking about one-off houses." Robbie Kerr, director of Adam Architecture, which designed one of the first homes permitted under Gummer's Law (see panel), says the policy has helped improve standards among built environment professionals. "It is a very important policy that continues to drive the wider profession to explore what the house of the future can look like," he says. "One must aim for the highest standards of design."

Actor Rowan Atkinson's home (above) in the heart of the Chilterns Area of Outstanding Natural Beauty (AONB) was one of the winning schemes in the RIBA South 2017 Awards last month. It used 'Gummer's Law' as part of its case for planning permission. American architect Richard Meier & Partners and planning consultants Terence O'Rourke stated that paragraph 11 of PPS7 was met due to the "subtle, sympathetic nature of this ground-breaking design". Council officers recommended refusing the proposal, and the Chilterns Conservation Board said the scheme would be of a "completely inappropriate design for this prominent site in the AONB". But councillors approved the plans in 2010, judging that the "radical design" of the scheme would enhance the AONB.

The neoclassical design of Ashley Park in Hampshire (below) was, according to Compass, only the second house to be allowed at appeal under 'Gummer's Law' back in 2001. It was built in 2004.

The proposal, designed by Adam Architects, was refused by Test Valley Borough Council due to policies restricting development in the open countryside and the authority felt it did not meet the Gummer's Law test. But in his report, inspector Keith Durrant said the architecture of the scheme was "outstanding". He noted that it had evolved under "a skilled architect with a national reputation for an innovative approach to the classical traditions, re-interpreted for the 21st century".

Architect Richard Hawkes' practice won planning permission for this 'eco-house' proposal in Tandridge, Surrey, in 2012 (above). According to Hawkes, it was one of the first schemes granted under NPPF paragraph 55. The plan for the low carbon home, on a previously-developed site in both green belt and the High Weald AONB, was allowed on appeal. Tandridge District Council refused permission, after judging the proposal to be inappropriate development in the green belt. However, a planning inspector disagreed and concluded that the project would create a "positive improvement to the appearance of the site". Hawkes says the project was designed to respect nearby existing buildings. "Some of the early contemporary PPS7 houses were of the 'spaceship has landed' type, but sometimes it's appropriate to have something more gentle and well-mannered," he said.