The first Community Infrastructure Levy (CIL) charges to be adopted in England and Wales have now been in force for more than five years. Due to mandatory rules intended to ensure CIL charges keep pace with market conditions, the rates that those authorities are now charging bear little similarity to those developers were being asked to pay five years ago, an analysis by Planning has found.

National planning practice guidance explains that, in calculating individual charges for the levy, collecting authorities are required to "apply an index of inflation to keep the levy responsive to market conditions". Levy regulations stipulate that the index to use is the national All-In Tender Price Index of construction costs published by the Building Cost Information Service (BCIS) of the Royal Institution of Chartered Surveyors.

Applying this index to the first wave of CIL charges, adopted in 2011 and 2012, shows the rates developers face in 2017 are more than a quarter higher than when those charging schedules were first adopted (see infographic, below). When Newark and Sherwood District Council brought its levy into force in December 2011 its maximum residential charge was set at £75 per square metre. But the indexation rule means that figure is now more than £97, Planning’s analysis suggests. In a statement, the council confirmed a "significant increase" of 30.9 per cent.

The charges developers are required to pay under the pan-London mayoral CIL, set up in April 2012 to raise money for the Crossrail project, have also risen by more than a quarter. Development in the levy’s central London zone is now charged at more than £64 per square metre, the analysis suggests, up from £50 when the tariff came into force.

In some areas, indexation means the rates councils are now charging could impact on development viability, say observers, who add that the rules also present charging authorities and applicants with a series of vexing practical challenges.

Matthew Spilsbury, director of development advisory at consultancy Turley, said that, in some areas, indexation is now having a "material impact" on the viability of schemes. Adopted charging schedules build in a "buffer", with rates often set at 20 to 30 per cent lower than the maximum CIL rate that could be borne by development in a local area. Applying indexation sees that buffer wiped out in some areas, leaving rates pushing at the margins of viability, Spilsbury said. He added that, while improvements in market conditions could mean developers are able to bear a greater burden in higher-value locations, where indexation is exceeding 20 per cent authorities should revisit their charging schedules to reinstate appropriate buffers and ensure the indexed rates are not holding back development.

Turley associate director Peter Home, a former Department for Communities and Local Government (DCLG) civil servant who was involved in drawing up the CIL regulations, said the All-In Tender Price Index had risen at a faster rate than originally expected. Part of the reason it was selected as the indicator to index CIL against, he said, was that it had been negative in the recession period prior to CIL’s introduction, and the DCLG felt that selecting an index that could go down as well as up would demonstrate it was being fair to developers. But since then, he added, "it has only ever gone up" as the country recovered from the recession. Home said one implication of the impact of the indexation mechanism is that few authorities are opting to go through the process of reviewing CIL charging schedules. Instead, he said, they can "sit there with the charges increasing every year and the money rolling in".

Independent planning adviser Gilian Macinnes, a member of the CIL review panel whose report to government was published in February, said the issue of indexation was "repeatedly raised" to the panel. A research study published alongside the review’s report found that "use of the BCIS index for uprating payments" was one of four main problems cited by charging authorities in calculating CIL payments.

Charging authorities’ frustration with the indexation rules have been laid bare by a series of discussions on the Planning Advisory Service (PAS)’s online forum, one of which ran for four years. Macinnes said that there are two key issues for charging authorities, the first being that the BCIS index is subject to a substantial subscription charge and is not publicly accessible. On the PAS forum, this is a key bone of contention: posters point out that subscribing to the index is a significant additional administrative cost for local authorities, and that copyright rules prevent authorities from publishing the index figures on their websites to enable applicants to calculate their CIL liability.

For Spilsbury, this is also a source of frustration. He said there is a lack of consistency in how charging authorities both undertake and publicise the applicable indexed CIL rates, and that copyright rules should not prevent authorities from making clear on their websites what rates are being charged once indexation is applied to their adopted charging schedules. He added that few authorities publicise the indexed rates, and as a result, some developers are unaware of rate rises, leaving them facing unexpected additional CIL liabilities and needing to renegotiate land deals. In some cases deals are falling through, schemes are going back to the drawing board, and developers are seeking to reduce affordable housing provision to offset the impact on viability, Spilsbury said.

A second concern for authorities, Macinnes said, is that it is not clear when values on the index are fixed, and until then provisional values may fluctuate, meaning that different authorities may be using different index values. A technical annexe published alongside the CIL review highlighted the concerns of one respondent: "The use of an index which is continually changing even after it is supposedly fixed … creates a lot of extra admin work. The index may have changed in the time between submitting a liability notice and a demand notice, so a recalculation is required."

Another area of uncertainty is how indexation should be applied in relation to section 73 applications, which are used to revise the terms of earlier planning permissions. In a recent redacted appeal ruling, the Valuation Office Agency found in favour of an appellant that had challenged an authority’s attempt to apply indexation to the whole of a development following a section 73 application to amend an earlier permission. 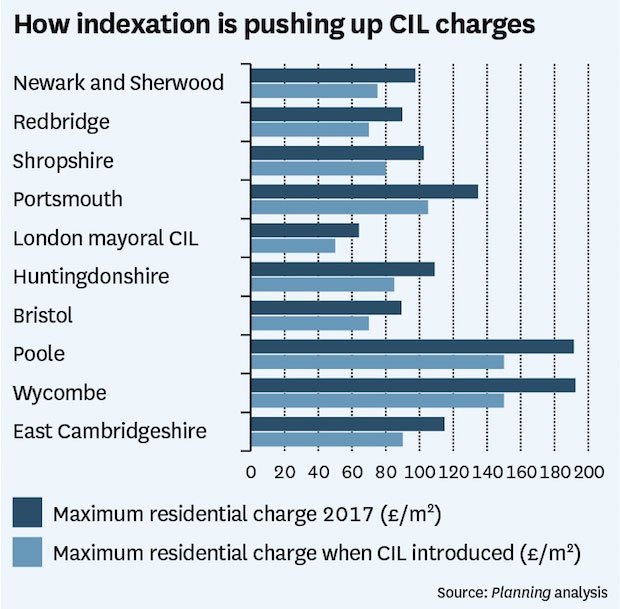