Stability reigns in the upper echelons of the top-rated planning law firms (see table, below) in our 20th annual survey of the sector. Eight of last year's top ten are still there, with start-up firm Town Legal and Clyde & Co joining them at the expense of King & Wood Mallesons (KWM), whose UK arm is now in administration, and Herbert Smith Freehills (HSF).

Pinsent Masons stay in pole position for the fourth year running, with more than 110 legal and support staff in its planning team. "They have strength in depth and good backup," says one consultant. "We have always been impressed with their thoroughness and responsiveness to requests, night or day," says a senior council planner. Partner Iain Gilbey moves from fourth to second in the individual solicitor ratings and colleagues Robbie Owen and Richard Ford appear just outside the top five (see table, below). Recent recruits include Planning Inspectorate examiner Emrys Parry and new partner Emma Harling-Phillips from DLA Piper, while partner Marcus Bate has moved to residential developer Mount Anvil. 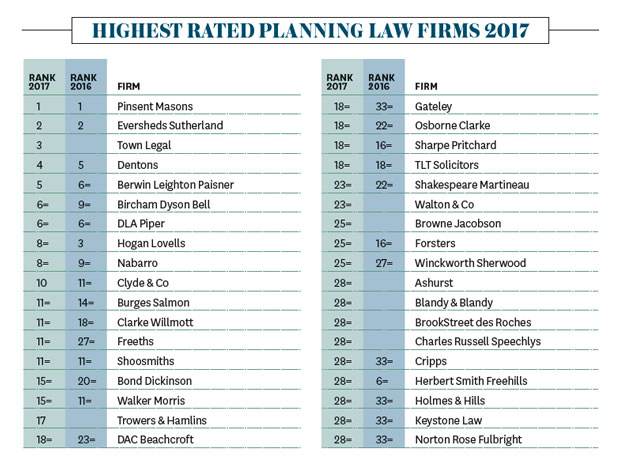 Eversheds Sutherland fill second place for the 11th consecutive year. "They have expertise across the planning spectrum," says one client, while another describes the team as "very efficient, always available and 100 per cent trustworthy". Partner and head of planning Stuart Andrews is joint eighth in the individual rankings, while solicitor numbers are up by one overall to 42. As well as helping the High Speed Two (HS2) bill secure Royal Assent, the firm's infrastructure specialists have been advising on a replacement gas pipeline across the Humber, two North Sea electricity interconnector projects and the proposed York Potash mine on the North York Moors. Property clients include Barnet Council on the Brent Cross shopping centre redevelopment, Northern & Shell on Westferry Printworks in London Docklands, Henley Camland on Ebbsfleet new town in Kent and a consortium of landowners and developers on an urban extension at St Neots, Cambridgeshire. 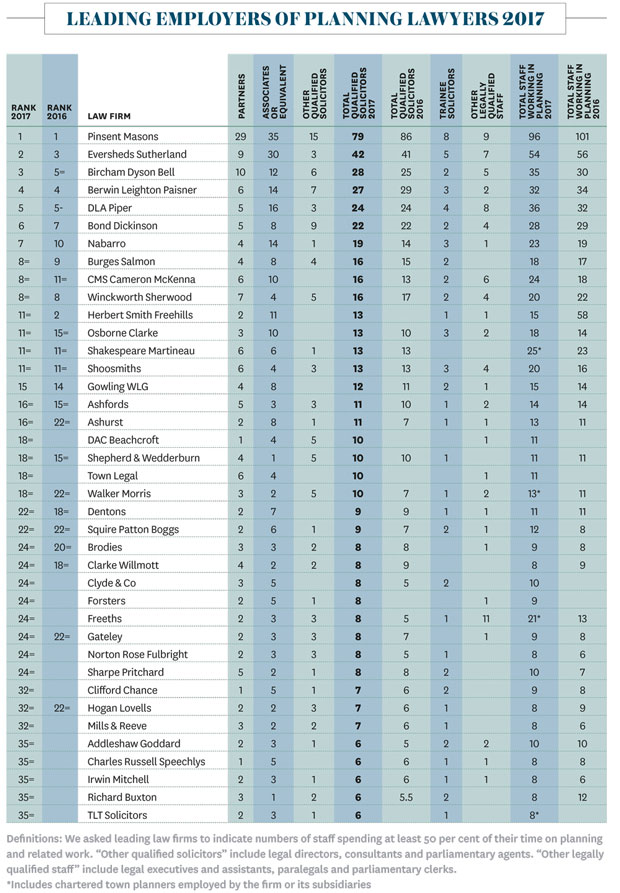 Town Legal, which only launched last autumn, make a spectacular debut at number three in the rankings. "They seem to be going about things with refreshing enthusiasm and a sense of purpose," says one consultant, while another expects them to "become a major powerhouse in planning law". Of the six founding partners, Simon Ricketts and Meeta Kaur came in from KWM, Patrick Robinson and Liz Christie from HSF, Clare Fielding from Gowling WLG and Mary Cook from Cornerstone Barristers. Ricketts retains top position in the individual rankings for the eighth consecutive year and Fielding climbs to joint eighth. Apart from Ricketts' caseload (see profiles, below), other major projects include the redevelopment of former power station sites at Battersea and Fawley, Hampshire, London's third tallest building at 22 Bishopsgate and Quintain's Wembley masterplan.

Dentons are up to fourth from fifth, with partners Stephen Ashworth and Roy Pinnock joint eighth in individual rankings. One consultant detects a breadth to Dentons' offer, "with the planning partners capably supported by knowledgeable and conscientious associates". Clients include a group of north Essex councils on plans for a series of garden communities, Sainsbury's on mixed-use schemes in Whitechapel and Ilford and Lands Improvement Holdings and Gallagher on mixed-use regeneration plans for the former Poole Power Station. 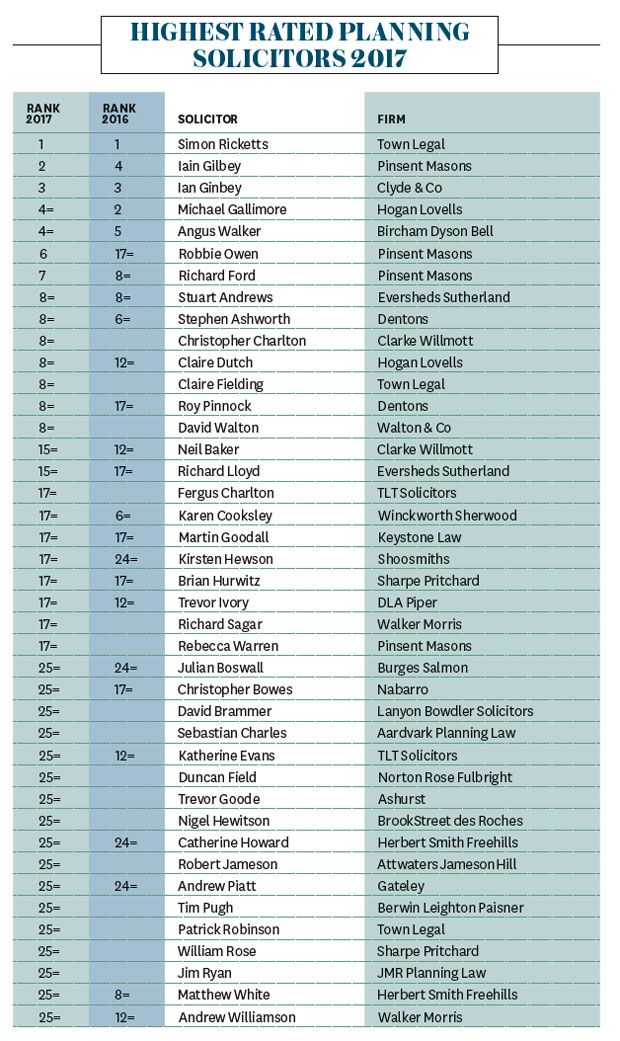 Up one place to fifth, Berwin Leighton Paisner lost partner Vicky Fowler to Gowling WLG last year, but otherwise the planning team is undepleted. "They have a number of very competent individuals who can be relied upon for sound advice," says a council planning chief. The firm is awaiting a development consent order decision on the UK's first EU-funded carbon capture and storage demonstration project and is advising Tideway, the company created to deliver London's Thames Tideway Tunnel "supersewer". Property assignments include Westfield Europe's Stratford Shopping Centre extension and Land Securities' Ebbsfleet and Eastern Quarry sites in Kent.

In joint sixth, Bircham Dyson Bell's qualified solicitor numbers in its planning and infrastructure team are up from 25 to 28. Recruits include partner Matthew Smith from Capsticks and associate Emma Sutcliffe from KWM. Besides fourth-highest-rated individual Angus Walker's caseload (see profiles), other partners are leading on London's Garden Bridge, the London Paramount entertainment resort in Kent and the Port of London Authority's plans to reactivate east London's Orchard Wharf.

Also in joint sixth, DLA Piper's planning team size has remained stable overall despite several new recruits. The firm is acting for Hopkins Homes in the Supreme Court test case on the meaning of "relevant policies" for the supply of housing and is retained to advise HS2 Ltd on planning and compulsory purchase matters. Other clients include Cheshire West and Chester Council on Chester's Northgate mixed-use regeneration scheme, National Grid on new power lines to link up NuGen's proposed Moorside nuclear plant and INEOS Upstream on its fracking exploration programme.

Hogan Lovells, with just seven qualified planning solicitors at present, are down from third to joint eighth this year. However, partner Michael Gallimore remains in the top five individuals while his recent successor as head of planning, Claire Dutch, is joint eighth. Aside from Gallimore's clients (see profiles), the team is advising Benson Elliot on its Ealing Broadway redevelopment, Ballymore and Hammerson on Bishopsgate Goodsyard on the City of London fringes and M&G on plans to extend the Cribbs Causeway shopping centre in Bristol. 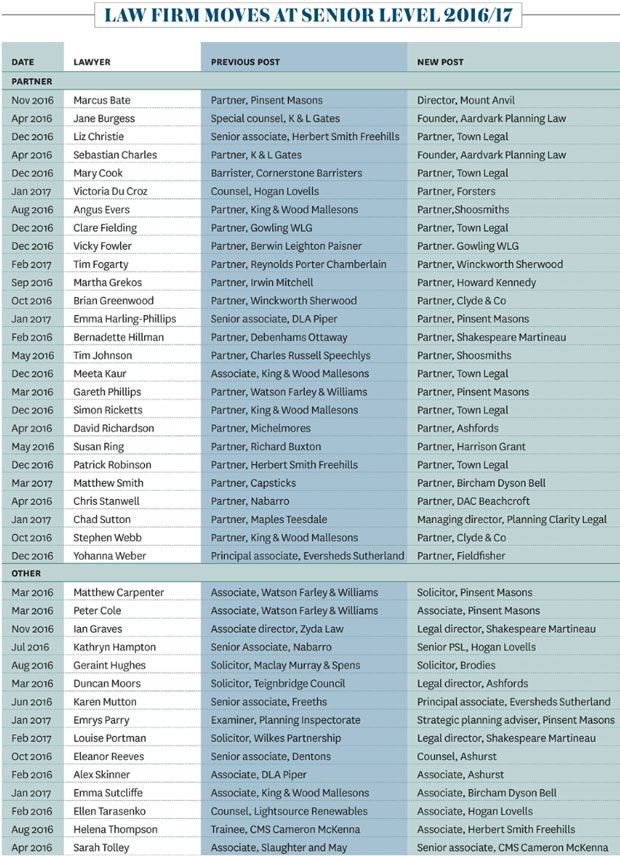 Of the four firms tied in 11th place, Burges Salmon, which is handling a clutch of major energy projects and a new garden village near Cardiff, has seen no change in overall team size. It's the same story at Clarke Wilmott, up seven places, with partner Chris Charlton leaping into equal eighth in the individual rankings. Shoosmiths have made two big hires at partner level in London - Tim Johnson and Angus Evers - and overall numbers have grown by four. Midlands-based Freeths, where eight solicitors work alongside six planners, have leapt into the top 20 for the first time. One consultant says the firm offers a "proactive approach to finding solutions". In 17th place, Trowers & Hamlins, also make their top 20 debut this year. Walton & Co principal David Walton is joint highest new entry, on equal eighth, in the individual ratings.

Among the other leading employers (see table, above), sixth-placed Bond Dickinson have seen no growth in qualified planning solicitor numbers despite a workload varying from North Sea wind farms to rail and airport schemes and a garden village in Hampshire. Walker Morris's complement of qualified planning solicitors grew by two. Osborne Clarke's team is up by three qualified lawyers, following "significant uptake" in its planning litigation practice. Following Greenwood's move, Winckworth Sherwood's planning team dropped by one, though Tim Fogarty arrived from Reynolds Porter Chamberlain as partner. Ashurst has taken on four new solicitors to cope with growth in business on large-scale housing-led mixed developments in London and the South East. Shorn of Robinson and Christie, HSF are currently fielding 13 planning solicitors; the figure of 47 supplied by the firm last year included a large contingent of overseas-based planning lawyers.

In the council legal team rankings (see table, below), Westminster and the City of London retain first and second slots. City of London comptroller Deborah Cluett remains in the top individual slot, sharing it with Royal Borough of Greenwich principal lawyer Eleanor Penn, who was second in 2016.

The survey results for the most-admired law firms and solicitors were based on 208 responses from planning consultants, planning officers, developers and council solicitors. All responses were checked to make sure they came from eligible groups only. 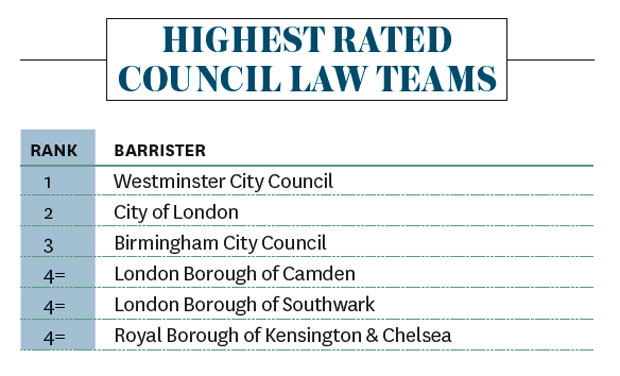 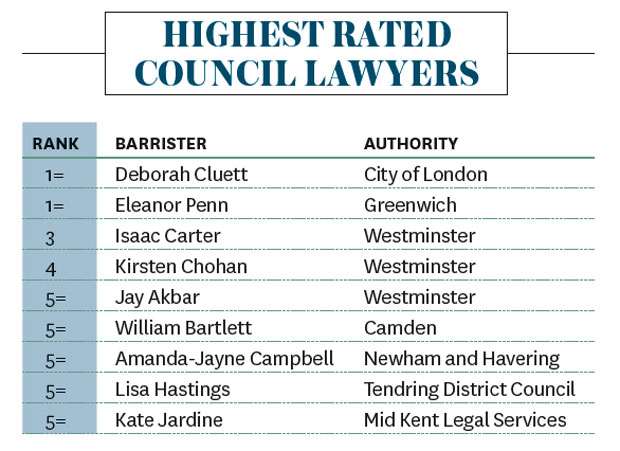 Ricketts, says one admirer, is "at the top of his game" and "always combines high-level strategy skills with an eye for the detail". Another senior consultant says he "blends a wealth of strategic experience with razor sharp insight on legislation and precedent". A further voter praises him for being "extremely approachable" and able to express himself in layman's terms. His key cases in the last year include acting for land promoter Richborough Estates in its landmark planning case concerning a green gap in Cheshire, now being heard in the Supreme Court. Ricketts has also acted in an inquiry for a group of investors in Colchester town centre who objected to an out-of-centre retail scheme.

Gilbey is "one of the country's leading planning solicitors given his experience and knowledge of the complexities of the planning system", says one senior planner. Gilbey, another adds, "brings a well-balanced mix of gravitas, calm and humour to the most complex section 106 negotiations". In the past year, Gilbey successfully advised the landowner in the pivotal CPRE v Dover District Council case, which has just been given leave to appeal to the Supreme Court. He has also advised both Berkeley Homes and Ballymore Group on several London development and regeneration schemes, including Southall Gasworks for the former and London City Island for the latter.

Ginbey is a "21st century-facing lawyer", says one senior consultant, adding: "Clients know that Ian will fight for their interests and put the hard yards into a project." Another says Ginbey is "pragmatic and client-focused in resolving complex legal planning issues". He is currently advising Commercial Estates Group on the promotion of a new garden village at Dunton Hills, Essex, and Grainger on a compulsory purchase order to help deliver a mixed-use regeneration project at Seven Sisters. Ginbey is also negotiating the section 106 agreement for Corinthian Land's application for a 4,000-home urban extension south of Canterbury.

Gallimore is "highly authoritative" and "calmness personified", says one admirer. Another adds: "Michael is renowned for both his experience and his professional, good-natured manner in providing sound planning advice." Gallimore is advising developer Argent Related on the Brent Cross South regeneration project, which includes 7,000 new homes, 40,000 square metres of commercial space and a new railway station. He is also advising St George on mixed-use residential-led schemes in Kingston and Ealing. Gallimore was a member of the government-appointed Community Infrastructure Levy review panel, whose report appeared last month.

Walker is "extremely conscientious, thoughtful and understands the bigger picture that comes with large infrastructure projects", according to one voter. Another senior planner says he has "encyclopaedic knowledge" of the Planning Act 2008 major infrastructure regime. Walker, chair of the National Infrastructure Planning Association board, is also praised for his blog on major infrastructure. Walker is leading on a proposed development consent order (DCO) to reopen Manston Airport in Kent. He is also working on two proposed DCO applications for Highways England: the Lower Thames Crossing between Kent and Essex and improvements to the A63 in Hull.