In January, Westminster City Council advertised for three planners to join its 24-strong enforcement team. The primary aim is to deal with an issue that is looming large for several inner London boroughs. "We need to increase monitoring of short-term letting of residential accommodation across the borough," team leader Roald Piper told Planning.

Westminster is at the sharp end of the planning fallout from the home-sharing trail blazed by Airbnb and other online providers, such as One Fine Stay and Under the Doormat. Five years ago, short-term lets helped the capital cope with visitor demand from the London Olympics but revealed a confused picture on the enforcement of planning controls. In 2014, communities secretary Eric Pickles vowed to sweep away an "archaic" 40-year-old London-only rule defining any let of residential stock, even for a single night, as a change of use requiring planning permission.

Under provisions in the Deregulation Act 2015 brought into force in May that year, residential premises in London can be used as "temporary sleeping accommodation" for up to 90 nights in any calendar year without triggering a change of use. The changes were designed to allow London home-owners to participate in the sharing economy, but since then home-sharing has mushroomed. Airbnb's London business grew from a few hundred properties, from rooms to whole houses, in 2011 to at least 40,000 by 2015. Figures compiled by planning consultancy Lichfields last October, based on data from independent website Inside Airbnb, showed availability of more than 20,000 "entire" homes for at least one night (see infographic).

"Neighbours are concerned about noise and disturbance, with 'party houses' being a particular problem," says Neill Whittaker, a planning associate at specialist enforcement firm Ivy Legal and deputy chair of the Network for Planning Enforcement. Tom Copley, the London Assembly's Labour group housing spokesman, says: "There are entire blocks in Westminster and parts of Camden where all the flats are being let short-term. People don't know their neighbours any more."

The other main concern is around home-sharing's impact on housing supply in a city facing severe shortages and high population growth. Whittaker says: "Home-sharing has the potential to remove a significant amount of longer-term rental properties from the market, as landlords may find it more attractive to gain higher rental incomes in a shorter space of time." Westminster Council says weekly rents for Airbnb lets on four-bedroom properties in its area are typically double permanent private lets while for oneand two-bed units the rate is about three times higher. It also points to an 80 per cent increase in Airbnb listings in its area since the act came into force.

Research published by the Institute for Public Policy Research (IPPR) think-tank last December, compiled from Airbnb bookings data for 2015, found that properties used for home-sharing comprised around one per cent of London's total stock and suggested that fewer than 5,000 units would be caught by the 90-day limit. "Our report shows that home sharing in London isn't currently widespread enough to be causing problems, though it has the potential to do so in future," says researcher Charlotte Snelling. 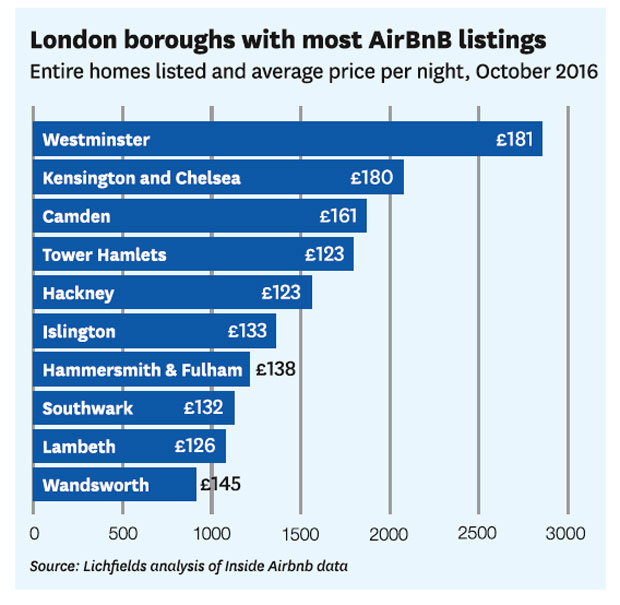 Nevertheless councils are keen to get a grip on breaches of the 90-day limit. But the task of identifying who is renting short term, and for how long, is resource-intensive. "How do you differentiate between an Airbnb visitor, a relative or friend or someone doing a house swap?" asks Stuart Andrews, a partner at law firm Eversheds. To build up evidence on suspected breaches, Piper's staff make repeated visits to properties to interview occupiers, scrutinise users' online reviews and hand out planning contravention notices. "The resource implications are huge," says a council spokesman. "Even where we obtain evidence and elect to issue an enforcement notice, it can only require cessation of short-let use for the remainder of that calendar year."

Copley says the legislation is flawed in placing the onus on planning authorities but not giving them the data or resources to implement enforcement. "The government needs to look at more effective solutions," he says. One option, he says, would be a "simple to administer" licensing system run by London boroughs. "They would need the data to do it and I hope we can achieve data sharing voluntarily between planning authorities and the industry," he says.

Airbnb's "responsible hosting" announcement in December that it would enforce the 90-day deadline for its properties was hailed by some as a breakthrough. Starting from 1 January, its systems will automatically limit entire home listings across Greater London to 90 nights a year "unless the hosts confirm that they have the required permission". "This will no doubt make it more difficult for home-sharers to disregard planning rules, providing more homes for long-term rental," says Matt Pochin-Hawkes, a senior planner at Lichfields. Whittaker is less sanguine: "Landlords could simply advertise their property with a different operator if Airbnb refuses to advertise after the 90 days are up."

"I am keen to see a cross-industry response to help local authorities enforce the law," Khan wrote. The IPPR backed the move, saying self-regulation in the sector will promote a "responsible form of letting which helps the capital to succeed and thrive".

Westminster Council says tougher penalties are needed for non-compliance, perhaps by prohibiting property owners from short-letting for a fixed number of years if they go over the limit. But Andrews cautions against "altering policy or law in a knee-jerk response to a new phenomenon". He says: "There is an armoury of existing controls that can be drawn upon if this activity is a real issue. Once evidenced, it should be possible to enforce without too much difficulty. There is also the Proceeds of Crime Act 2002 to add some punch to the process."

Like many popular tourist areas, the Lake District national park has seen rapid growth in holiday accommodation offered through online platforms. With no specified limit on short-term lets, park officers have to use their judgement on whether it is expedient to take enforcement action against holiday uses.

Park authority head of development management David McGowan says planning problems with home-share accommodation are rare, running to no more than two or three cases a year. However, he adds that his compliance team check sharing websites' content in monitoring and investigating concerns raised by neighbours and local councils over holiday uses.

The park authority used material on AirBnB's website to good effect in a recent enforcement action against short-term rental use of an outbuilding at a house in Windermere. The owner claimed that the building was an additional bedroom, with only "occasional" holiday lets.

But in a decision latter last month (DCS Number 400-014-522), inspector Paul Freer decided that the number of testimonials, including one reference to a four-night stay, on AirBnB made clear that more than occasional holiday use was involved. He also took references on the site to "guests", a nightly fee and key collection arrangements into account in concluding that an unauthorised material change of use had occurred.