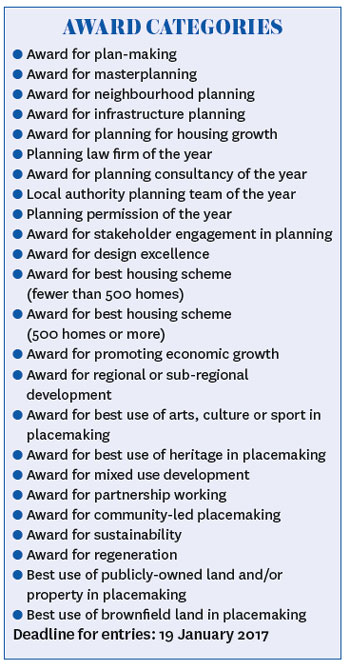 The Planning Awards are now open for entries. Previous winners attest that winning an award has been beneficial to perceptions of their team, provided a morale boost for staff and has helped with the process of recruiting new team members. Even drawing together an entry was beneficial in itself, previous entrants say.

All entries must relate to work either carried out or completed since 1 October 2015. In evaluating all submissions, an expert judging panel will be looking for evidence that entries have improved or are likely to improve the physical or environmental quality of a place or the economic or social well-being of a community or other, category-specific, criteria.

The 2017 awards, which incorporate the Placemaking Awards, include a new category, which will reward outstanding masterplanning work (see panel, right). Previous winners say that winning a Planning Award has helped to raise the profile of their team within and outside of their organisation, helped them with recruiting staff, and provided a morale boost to team members.

Sarah Morgan, regeneration planning manager at Wokingham Borough Council, which in June won this year’s award for making development viable for its town centre regeneration project, says: "It was great for team morale to be recognised by the professional industry and helped improve our reputation both within and outside of the council, including generating very positive coverage in the media."

Marilyn Smith, head of development management at the London Borough of Hounslow, which won this year’s award for local authority team of the year, also says that winning an award "provides a good morale boost for staff". She adds: "Winning shows us as a forward looking pro-active place to work, which helps us when recruiting."

Roy Pinnock, partner at law firm Dentons, which won this year’s planning law firm of the year category, says that the company had used the award to further promote itself in the industry, through a combination of PR, tender submissions, use in presentations and emails. Previous entrants say that even drawing together an entry can be beneficial in itself. Pinnock says: "The awards provide a chance to take stock of the practice, ask where it excels and benchmark it against our peers."

Wokingham Borough Council’s Morgan adds: "Pulling together our entry gave us the opportunity to reflect on the all the hard work that the team had undertaken bringing the regeneration project to Wokingham town centre."