Four years ago, the former planning minister Nick Boles said that he expected "vanishingly few" local authorities to be stripped of their planning powers under the so-called "special measures" performance regime. He has been proved right: since the policy’s introduction in 2013, only three authorities – Blaby, Bromsgrove and Trafford - have been penalised for taking too long to decide major applications.

But observers say that the forthcoming expansion of the policy to assess planning departments’ performance on non-major applications could see a far greater number of authorities placed in special measures, and the prospect of many more applicants getting the opportunity to bypass town halls and submitting their applications direct to the Planning Inspectorate (PINS).

The extension of the regime to non-major applications was first mooted in last year’s Productivity Plan and legislated for the Housing and Planning Act. Draft criteria published last month by the Department for Communities and Local Government (DCLG) state that councils will be eligible for designation should they determine fewer than 65 per cent of non-major applications on time over a two-year period ending in September 2016. So how many councils could be penalised under the new regime?

An analysis by Planning of official minor application performance data covering the first seven of the eight quarters that will form the first two-year assessment period shows that 22 authorities are currently beneath the 65 per cent threshold (see infographic, below).

Richard Crawley, programme manager at the Planning Advisory Service, said that several of these councils are in a position in which they cannot mathematically escape designation. He believes that the new performance regime for nonmajor applications has the potential to have a far greater impact than the existing regime for major applications.

Councils decide many more non-major applications than they do major applications, he said, and points out that several of the councils currently beneath the 65 per cent threshold are large authorities that process an above average number of applications. These include Westminster, Liverpool, Oxford, and Brighton and Hove. "Some major towns and cities are involved, with many thousands of cases," Crawley said. "It could lead to a spike of work at PINS, but we are in the realms of the unknown."

The introduction of the special measures regime for major applications is seen by experts as being behind an explosion in the use of extension of time agreements (EoTs) and planning performance agreements (PPAs) between councils and applicants. Under the special measures policy, the calculation of the proportion of decisions made on time by an authority includes EoTs and PPAs. This means that as long as applications involving such agreements are decided before the agreed deadline, they can be determined outside of the normal time limit without affecting the authority’s position in the performance table.

By and large, Crawley says, EoT agreements are not appropriate for non-major applications. However, they might be appropriate in a small number of cases, because there is a longer negotiation or consultation required, he adds. Another legitimate use, he says, is to clear a backlog, which can involve new determination dates being fixed once applications are already beyond their decision date.

As with the special measures regime for major applications, one constraint on the take-up of the new mechanism will be the willingness of applicants to bypass local authorities. Andrew Dixon, head of policy at the Federation of Master Builders, said that its members were unlikely to want to jeopardise a good working relationship with a local authority by going straight to PINS. However, he welcomed the extension of the policy to non-major applications, saying that, until now, the performance regime "seemed to be sending the signal that performance on non-majors didn’t matter". For Rose, a strain on resources is the main barrier to improvement. She cautioned that the sanctions would hit authorities which are already struggling. "Do we need to do a bit more to help them before we punish them?" she asked. 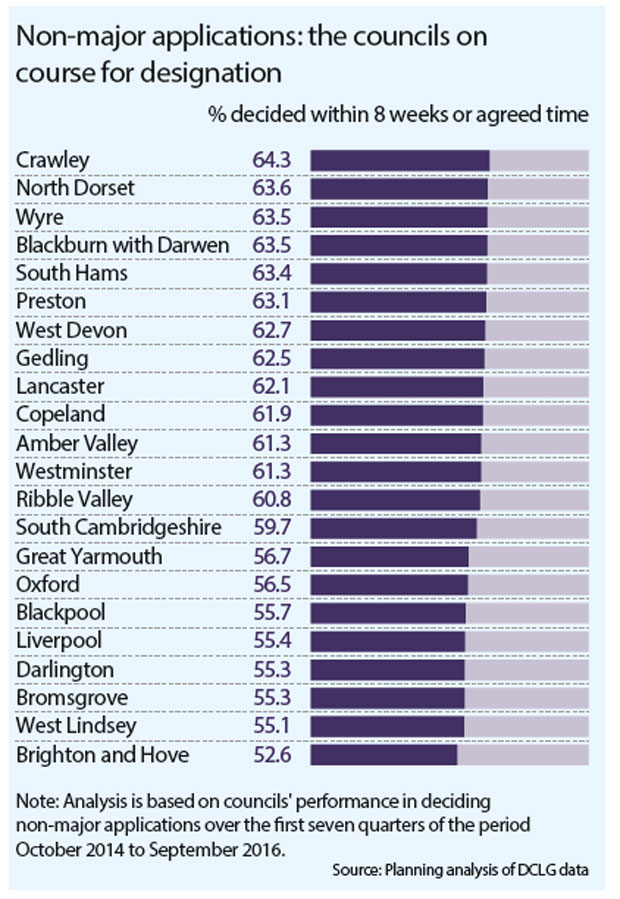