Planning consultancies' earnings rose again this year, according to the Planning Consultancy Survey 2016. The 56 highest-earning firms reported a total income of £506 million - £36 million more than the top 56 last year. For the 49 firms among them that provided fee income data last year, two-thirds (32) reported a rise, 14 a fall and three no change. Their total fee income rose from £464 million to £498 million.

The top ten fee earners (see table, below) reported a total income of £373 million, up from last year's £345 million. RPS remains the highest earner, bringing in £90.6 million in 2015-16 - five per cent more than last year - despite a reduction in planner numbers.

David Cowan, its managing director of planning and environment, says: "Growth has been as expected. Income in residential and transport has grown by more than in wind farms, solar and biomass." The firm leads eight of the ten sector tables (see table, below), but has shown a particular increase in energy planning, from £10.5 million to £11.5 million, bucking the generally reported trend of slow growth in that sector.

Arup remains second. Its planning fee income grew from £60 million to £70.9 million, and it is still the highest earner in transport planning advice, where its earnings have grown from £25 million to £33.9 million. It also tripled its income from planning for brownfield housing.

In third position is Atkins, bringing in slightly more than last year. Its strongest performances were in transport and energy, where it earned £15 million and £5.5 million respectively from planning consulting. Last year, it predicted an income rise of five per cent in 2015/16, but planning director Joanne Farrar says infrastructure planning work "didn't come forward as fast as anticipated" due to delays to High Speed Two procurement and the Hinkley Point C nuclear power station decision.

Fourth is WYG, increasing its earnings from £35 million to £45 million. Its most profitable planning consultancy areas are brownfield housing and transport and it's the top earner in education. Steve Fidgett, UK head of planning, says its fee income "grew significantly" as it took on more fee-earners and chartered planners. WYG also predicts a ten per cent rise in fee income next year. Fidgett says housing and infrastructure will benefit from the government's regional development agenda, particularly investment in the Northern Powerhouse.

Savills came fifth in the list of fee earners for a second year in a row. Its fee income rose from £23.3 million to £24.5 million. Greenfield housing, which grew from £1.2 million to £5.5 million, and commercial were among its strongest planning consultancy sectors. Head of London planning Nick de Lotbiniere says this reflects government recognition "that housing delivery needs boosting", and a recovery of the commercial office market.

Despite a £100,000 drop in earnings, Pegasus Group is up from seventh. It showed strongly in householder development advice, bringing in £10 million - the second highest figure in the sector. Nathaniel Lichfield & Partners grew fees by 13 per cent to £20.4 million to reach seventh. At ninth, Amec Foster Wheeler earned £19 million, up from £17.7 million. Tenth is SLR Consulting with £14.8 million - a slight drop from £15 million last year.

Firms in the top 20 earners that have seen the most growth are LDA Design (37 per cent), Carter Jonas (35 per cent) and Quod (23 per cent). Nick Taylor, a partner at Carter Jonas, says fee income has risen partly due to a growth in non-planner fee-earners. Peter Brett Associates saw the biggest drop in income in the top 20, down by more than 50 per cent to £6.1 million. Equity director Bernard Greep says this reflects a reduction in the number of planners and fee-earners employed by the firm.

Quod retains the highest maximum daily fee rate (see table, below) at £2,850, and the highest average earnings by fee-earner (see table, below). Overall daily fee rates figures show a significant rise in the higher rates, with 90 per cent of firms charging a maximum rate above £800 a day and 52 per cent above £1,200, compared with 69 per cent and 29 per cent respectively in 2015. This year, two-thirds expect to increase fees in the year to September 2017 (see pie charts, below). Almost half have increased their fees this year. 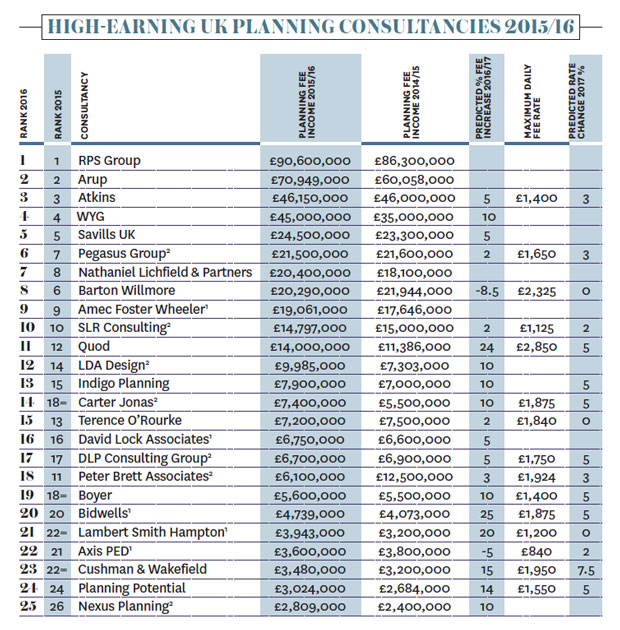 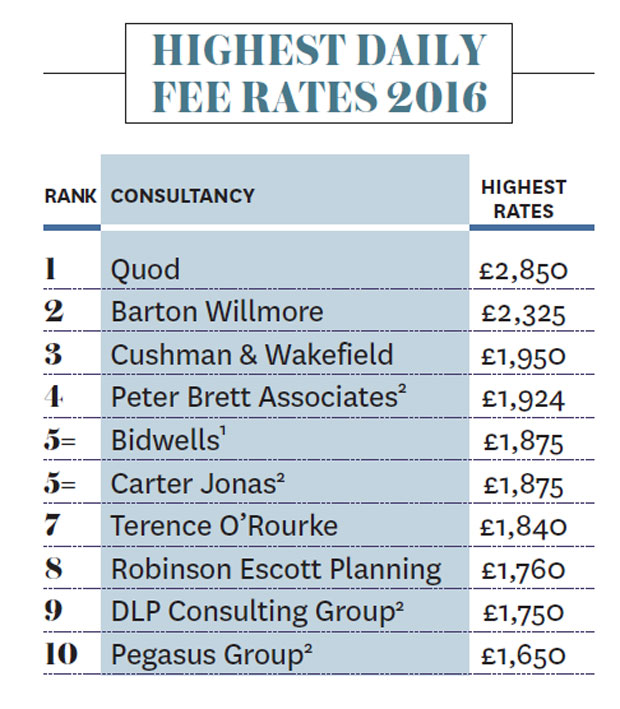 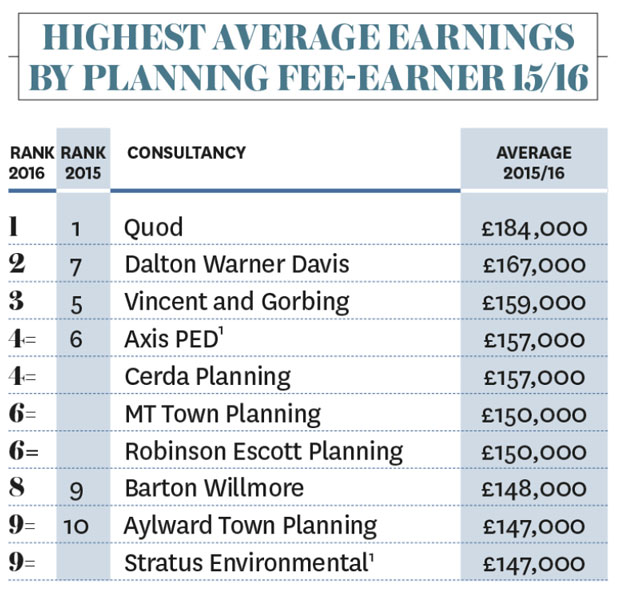 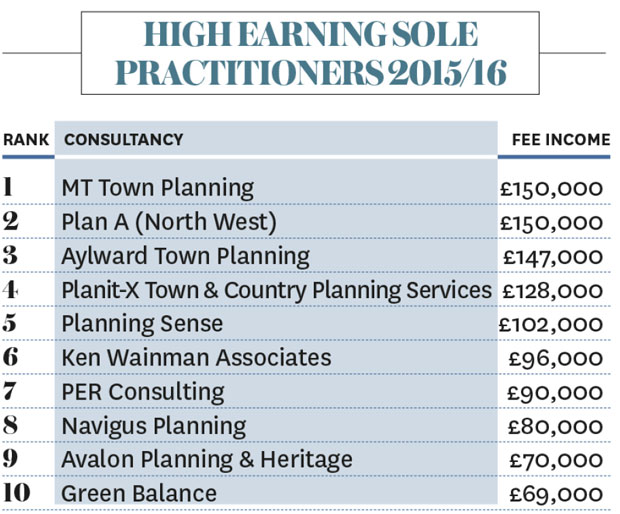 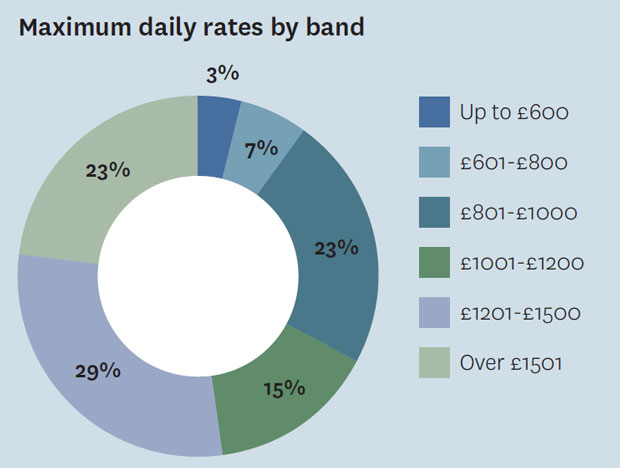 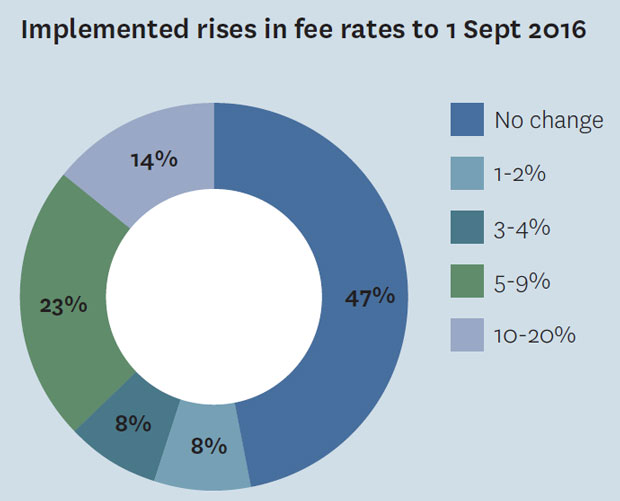 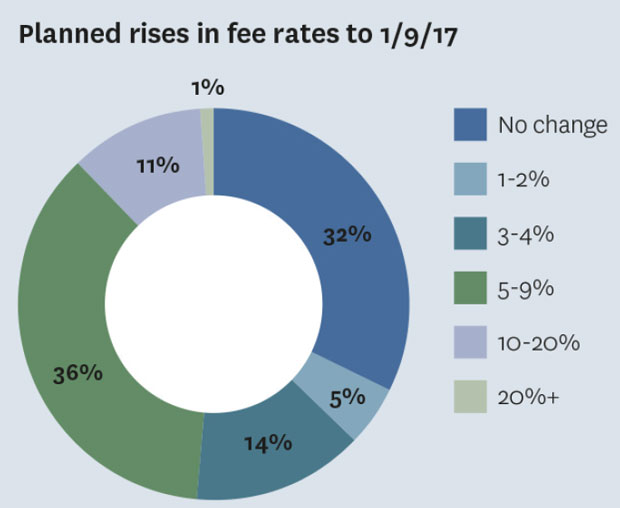 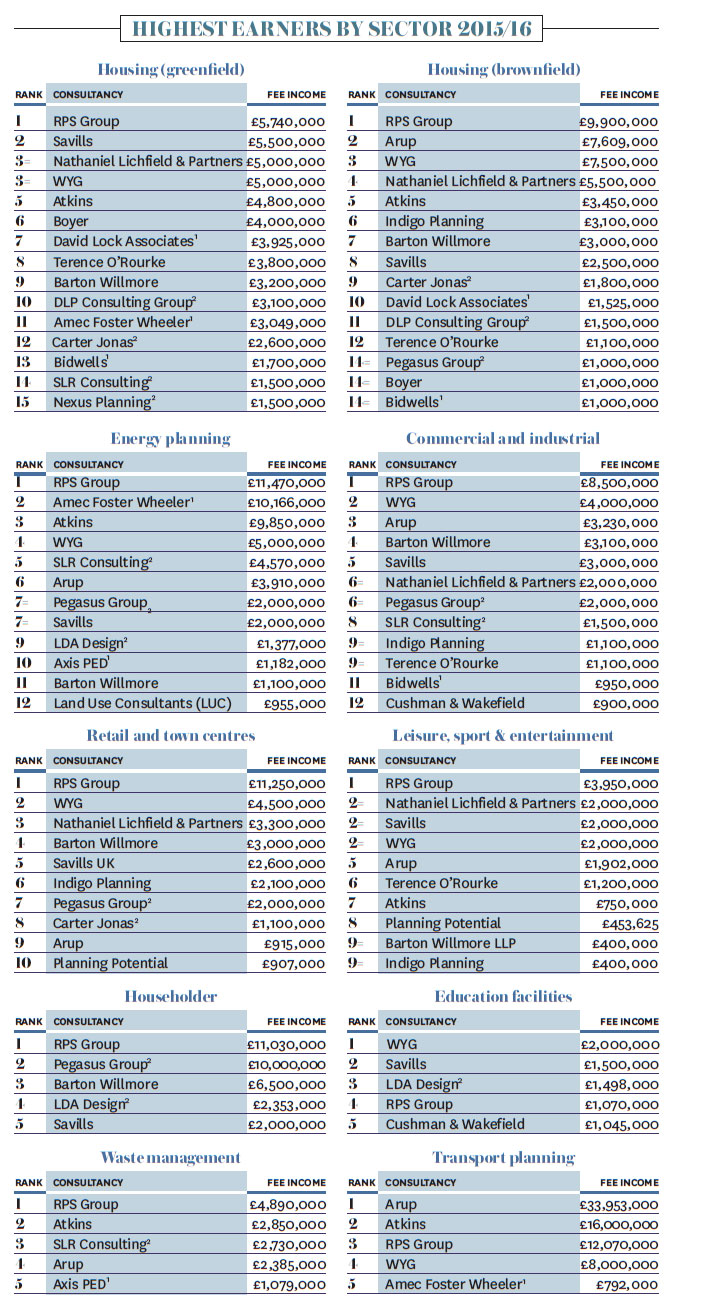