Nearly two-thirds of planning consult-ancies expect to grow their staff in the next year despite concerns over Britain leaving the European Union, according to the Planning Consultancy Survey 2016.

Among the 20 largest employers, the optimisim is even greater, with 94 per cent saying that they expect staff growth.

Of the 53 biggest, 33 reported an increase in the number of planners that they employed in the past year, seven said there had been no change and 13 reported a decrease. Only two of the top ten and four of the top 20 firms suffered an overall loss of planners.

The table (below) shows staffing data for 107 firms that employ three or more planners who are full members or fellows of the Royal Town Planning Institute (RTPI). Collectively, this year's 149 respondents employed 2,187 chartered town planners. The average number of planners per firm rose from 12.9 to 14.7, with the biggest ten emplyers reporting a total of 1,018 planners, up from 987 last year and 956 the year before.

Property firm Savills remains the largest employer of chartered town planners. After topping last year's table, the company saw its staff of chartered planners rise slightly from 161 to 167 and its fee-earners from 214 to 219 this year. Nick de Lotbiniere, its head of London planning, says it has hired planners from the public and private sectors and that fee-earner numbers have been boosted by a new economic impact assessment team.

Quod almost doubled its number of planners from 26 last autumn to 47 this September, taking it into the top ten leading employers. Associate Matthew Small says that it has undertaken "steady" recruitment in London and Leeds, "mostly at junior and mid levels", adding that its environmental planning team has seen "particular growth".

Other fast growers in the top ten include Capita and WYG, which both increased their planning staff by almost a fifth. Capita is now the second largest consultancy in terms of chartered planners, rising from fourth last year. It has seen big increases in its Salford and Barnet offices, where it provides planning services on behalf of local authorities. Collectively, the two offices have added 25 planners since last year. Stephen Ottewell, Capita's national planning lead, says that "demand for planning work remains strong across our local authority market" and that the firm plans to further invest in Salford and Barnet and in a third office, providing planning authority services in North Tyneside.

Steven Fidgett, head of planning at WYG, now the fourth largest employer of chartered planners, says that it has recruited planners from other consultancies and taken on graduate trainees. Fidgett says WYG has created new planning teams in Cumbria and Yorkshire by acquiring Harrogate-based Signet Planning and Carlisle firm Taylor and Hardy, while also boosting its London presence from 14 to 21 planners (see map, below). Fidgett says: "We are growing in most areas. We have larger multidisciplinary teams in many locations, and planning is a key part of that integrated delivery."

Outside the top ten, fast-growing firms include property advisers Strutt & Parker, which has grown from 26 to 33 planners, and Boyer Planning, up six to 34. Amec Foster Wheeler has added six planners, taking its total to 37. DLP Consulting is up six to 44 and Bidwells has risen from 25 to 30.

John McLarty, head of planning at Strutt & Parker, says his firm has recruited ex-local government officers, infrastructure specialists and "traditional town planners from consultancies across the South East". He adds that the firm, which had just 19 planners two years ago, bought AKA Planning last December, boosting its Guildford team, and in May created a London planning team.

One smaller firm that has shown continued high growth in the past two years is Planning Potential, which has almost doubled its number of chartered planners from 12 to 22. Office manager Louisa Gatland says that several existing staff have achieved chartered status, and that the firm has also taken on planners from other consultancies. She adds that the firm opened a third office in Bristol a year ago, "in response to client demand".

The larger firms that have reduced planner numbers include Barton Willmore, RPS Group and Peter Brett Associates. Barton Willmore report 12 planners fewer than last year. Senior partner Mark Sitch says: "This reflects the market's readjustment from the high levels seen in 2014/15 as the industry recovered from the downturn. We will be looking to grow our team in the next year."

RPS, sixth in the survey, is down by 17 planners, with a net loss of eight in London. Planning and environment managing director David Cowan says: "People in London tend to move and change jobs more frequently. In the last 18 months, most of the planners leaving RPS have either retired or taken up positions with clients, rather than other consultancies. Many clients have expanded their in-house teams in several sectors, including residential development."

Among the biggest ten employers, Nathaniel Lichfield & Partners (NLP) remains fifth in the table, increasing its number of planners by seven to a total of 112. NLP chief executive James Fennell says: "We expect to recruit into specialist areas to support our infrastructure teams and will take on graduates next year. We have three relatively new offices in Bristol, Edinburgh and the Thames Valley and expect them to continue to grow."

Arup moves up one place to seventh, adding six more planners. Close behind is Pegasus Planning, which has created one extra planning post overall. Indigo Planning moves up one place to ninth, having increased its number of planners by six to a total of 54. Managing director Phil Villars says that the firm has taken on a mix of planning graduates and more experienced planners, including regeneration and community engagement specialists.

Outside the top ten, Peter Brett Associates is down by 12 planners to 40, and 73 fee-earners to 52. Equity director Bernard Greep says: "Our 'mainstream' planning staff has reduced in line with our strategy of focusing on our key markets and core services. We do however continue to operate nationally, with a strong northern and southern presence."

Many larger firms have opened and expanded new premises in the past year (see map, below). Bristol is a hotspot, with three firms - DLP Consulting Group, Boyer, and Planning Potential - opening new offices to take advantage of opportunities in the city and the South West. Barton Willmore has added an office in Southampton and Iceni one in Glasgow, while Pegasus opened a Liverpool branch. Notable acquisitions include Boyer buying out Cardiff-based Harmers earlier this year.

As in last year's survey, many firms complain that recruitment continues to be difficult due to strong competition and a shortage of expertise. "It's a challenge to get the right people," says Boyer's executive director Andrew Williams. DLP Consulting's managing director Simon James adds: "There is a shortage of good qualified staff and graduate level entrants." 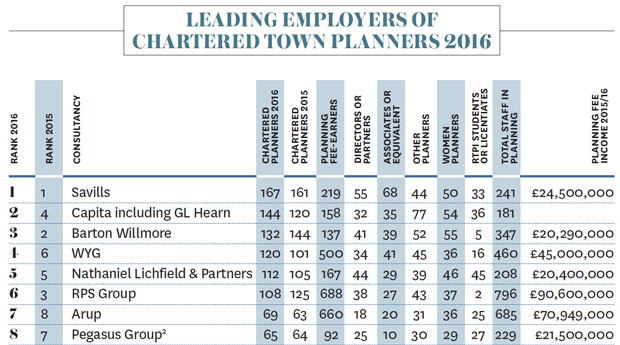 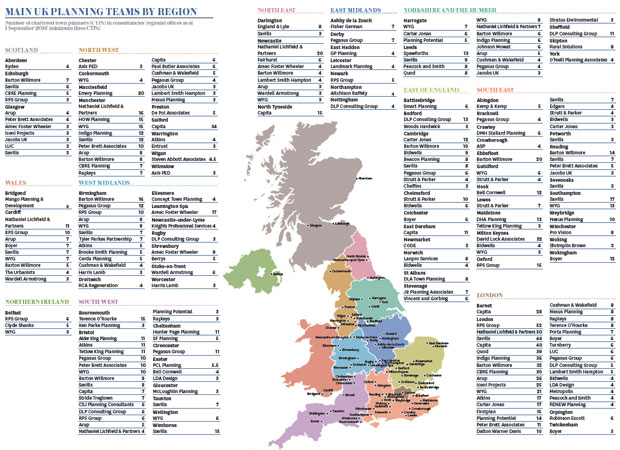 DEFINITIONS: Staff figures show full-time or full-time equivalent staff employed in UK offices at 1 September 2016. Planning fee-earners are employees whose time is billed to clients. Figures for directors, partners, associates and equivalent, other planners and women planners include fellows and full members of the Royal Town Planning Institute only. The chartered planners 2015 figures do not include staff employed by firms acquired since last year's survey. Total staff include all managerial, professional, technical and administrative staff employed in UK planning services. Fee income figures relate to the year ending 31 March 2016 except (1) Year ending on or before 31 December 2015 (2) Year ending later than 31 March 2016.