The vote to leave the European Union (EU) seems to have tempered the optimism evident in last year's Planning Consultancy Survey. This year we received usable responses from 149 companies from across the UK. Only 40 per cent of firms giving a view said they expect the economic climate for development to improve in the next year, against 88 per cent taking that line in last year's survey.

In addition, 61 per cent think the consultancy market would be better off if the UK had voted to remain in the EU. Only 13 per cent disagree. Yet a surprisingly high proportion of firms - 65 per cent - expect to take on more staff in the coming year, compared with last year's figure of 78 per cent.

Respondents also predict that demand for advice on residential planning will show further strong growth in the year ahead. Their forecasts of growth in the year to March 2017 identify greenfield and brownfield housing advice as the top performers, sustaining the high growth of 2015/16.

Consultants estimate that these sectors saw the most growth in 2015/16, almost exactly matching last year's forecasts (see chart, below). This was "underpinned by a severe housing shortage and policy changes", says James Fennell, chief executive at Nathaniel Lichfield & Partners. Bernard Greep, equity director at Peter Brett Associates, adds that, regardless of Brexit, mainstream residential developers are "cautiously optimistic" due to "inherent demand for housing".

Energy planning grew just 0.5 per cent in the past year against a two per cent forecast. Mark Sitch, senior partner at Barton Willmore, says the renewables market was hit by subsidy cuts, "but has seen signs of improvement". Demand for advice is predicted to be strong in the commercial and leisure sectors. "Industrial space has declined in the South East, so this is an area to watch," says CBRE Planning's managing director Emma Davies. 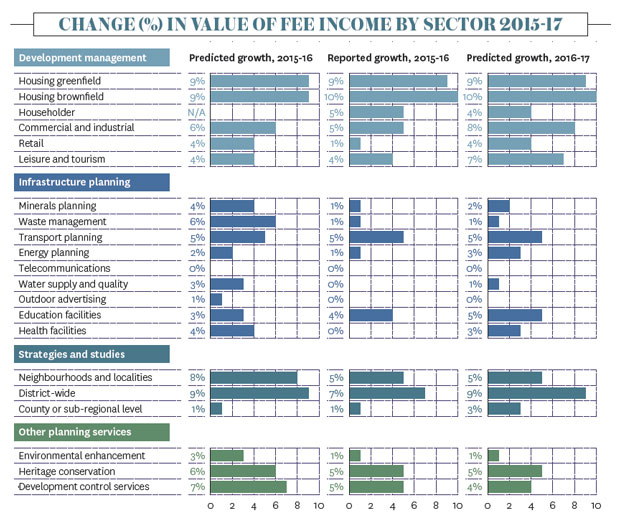 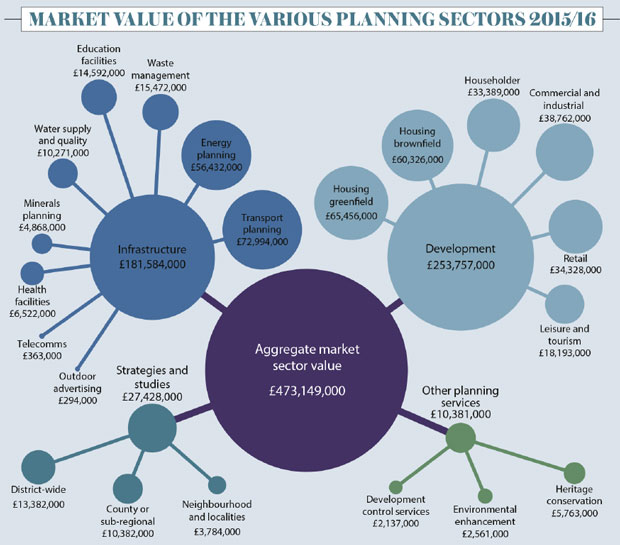