These are testing times for the onshore wind industry. While a few major wind schemes have planning consent and funding in place, a perfect storm of subsidy cuts, this spring’s transfer of responsibility for deciding major schemes from ministers to councils and a stringent planning policy stance has slowed the pipeline of permissions for turbines in England to a trickle.

For local authorities, the implications of the Conservatives’ election manifesto promise to "halt the spread" of onshore wind are still emerging. Many councils have adopted the spirit – and in some cases the letter – of former communities secretary Greg Clark’s June 2015 written statement, subsequently embodied in national Planning Practice Guidance (PPG). This stated that planning authorities should only permit turbines on sites shown as suitable for wind energy development in a local or neighbourhood plan and where, following consultation, "it can be demonstrated that the planning impacts identified by affected local communities have been fully addressed, and that the proposal therefore has their backing".

This hasn’t stopped turbine consents from winning approval. However, an analysis of DCS Ltd’s COMPASS appeals database shows that the probability of turbines gaining consent on appeal or call-in in England was about one in eight in the year to 31 August (see graphic). All but one of the 26 consents issued through these routes were for single turbines. Over the same period, six single turbines and two large wind farms were approved in Wales. In Scotland, central government approved nine large wind farms and 23 small schemes.

Despite the government’s hard line on wind development in England, a few councils are striving to put wind energy-friendly policies in place. According to Cheryl Hiles, a director at sustainable energy advisers Regen SW, the need to show that specific sites are suitable is a burden for councils. "The siting requirements are exacting. The policy requires councils to find sites in windy areas that pass landscape and amenity tests," she says.

In February, the industry’s hopes were raised when planners at North Devon and Torridge District Councils consulted on proposals to designate their entire area as potentially suitable for wind schemes, supported by criteria on how applications would be determined. But both councils’ executives blocked the policy. Torridge Council senior planner Ian Rowland says that, while key stakeholders backed the proposal, a postbag of 835 comments indicated that local communities were not. "We wouldn’t have put the policy forward if we hadn’t thought it was a sensible approach, but we respect the members’ decision," says Rowland.

Even councils that are supportive of renewables have had to trim their sails to government policy. Knowsley Council’s local plan, adopted in January, was amended after an inspector pointed out that, while its draft policy on renewables would allow wind schemes if set criteria were met, it did not meet the requirement to identify suitable sites. The council rewrote the policy to make it clear that it does not apply to wind energy. "We’ll consider the turbine issue again at the site allocations stage," says senior planner Ryan James.

In the South Pennines, a consultation on Calderdale Council’s emerging local plan last winter offered qualified support for wind farms or individual turbines where they "respond to" landscape types and areas identified in a study published two years ago. "We want to make sure our policies are worded positively enough to comply with the National Planning Policy Framework. So we might be able to put sites on the proposals map, or we may end up with a more generic policy," says principal planner John Houston.

Some councils are hoping neighbourhood plans will provide the policy base for wind energy. In July, following examination hearings, Cornwall County Council confirmed that it would not be allocating sites for wind development either through its emerging local plan or the site allocations process. Instead, it will only support turbine proposals in areas allocated for wind power in neighbourhood plans. The council says the move is necessary to comply with ministerial policy. But Hiles says relying on neighbourhood plans to identify suitable sites "shifts the burden onto local groups with even less resource than local authorities".

Every application has to be assessed on its merits, and no clear pattern has yet emerged on the extent to which proposals causing no identifable harm or community resistance will get the green light in the face of the PPG’s demands for site-specific allocations. Hiles sees this as a lost opportunity. "Onshore wind is one of the lowest-cost routes for generating energy," she says. "But unless there is a strong political lead at local level, there is no incentive for councils to support it."

A neighbourhood plan prepared by Gwinear- Gwithian Parish Council in west Cornwall has taken a supportive approach to wind energy. A revised draft plan, updated this summer, identifies potential sites for wind energy covering most of the parish. In line with national policy on wind energy, it stipulates that proposals must show that they fully address concerns raised by the community and ensure that adverse effects on residential amenity and highway safety are avoided or mitigated. The plan sets a 25-metre height limit on turbines bordering the Cornwall area of outstanding natural beauty and within or close to undeveloped coastal areas. It also rules out proposals with cumulative impact that would "significantly change" the wider landscape. "The parish council and the community have always been reasonably supportive of wind power," says parish clerk Vida Perrin. However, she acknowledges that the majority are not in favour of large commercial schemes. The draft plan, which went out for consultation last winter, is currently being checked by Cornwall County Council planners for compliance with their policies. Perrin expects to hear their response within the next few weeks, paving the way for a referendum next year.

Hull promotes itself as an "energy city" keen to embrace low-carbon technology. Its draft local plan notes that the city’s densely urban nature limits opportunities to install large turbines, but says that this can be done in the right places. Its policies map shows all port and employment areas, urban fringe farmland, education sites of at least one hectare and open spaces larger than 2.5 hectares as "potential areas" for wind development. Historic parks, nature reserves, cemeteries, green corridors and land overlapping conservation areas are excluded.

The policy stresses that even in potential areas, applicants must show that turbines’ impact on amenity, biodiversity, historic environment and telecommunications is acceptable. Consultation on the draft ended last week and Hull City Council planning policy manager Neville Brown says that it is too early to gauge reaction to its pro-wind policy. However, he says that this issue attracted little comment at the preferred options stage last autumn. The authority has resisted wildlife groups’ calls for a 600-metre buffer zone ruling out wind schemes along the Humber Estuary. "The estuary is an internationally protected wildlife area and we’re very careful with it," says Brown. 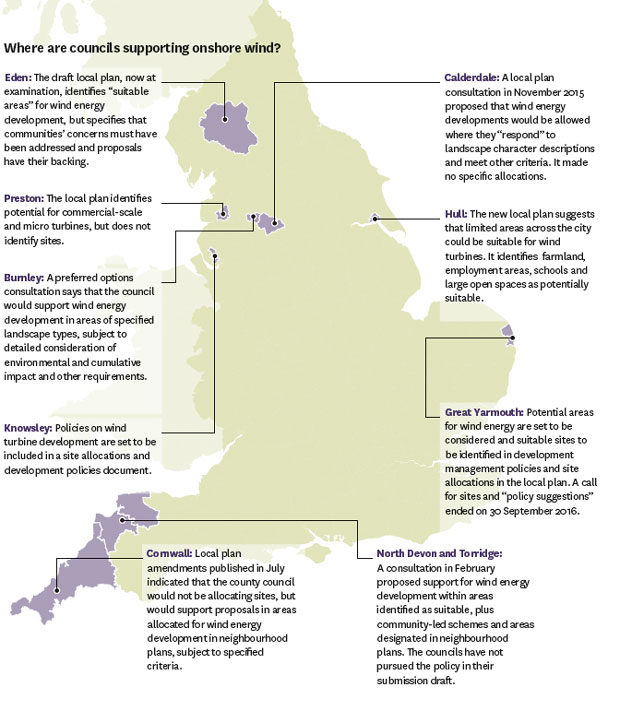