However, there are substantial variations between the two sets of figures in some areas. For example, an analysis by Planning shows that the London Borough of Tower Hamlets is now projected to have 186,000 households in 2035, up from 169,000 in the 2012-based projections. Meanwhile, Leeds is now forecast to have 378,000 households in 2035, down from the 387,000 previously predicted (see infographic).

So what should local authorities be doing to take the latest figures into account in their housing need calculations? Matthew Spry, senior director at consultancy Nathaniel Lichfield & Partners (NLP), said that councils just beginning the process of preparing their strategic housing market assessments "should now use these figures". He added: "Those already midway through the process will need to make a judgement on whether they need to update their evidence base."

Observers point out that national planning practice guidance (NPPG) states that, "wherever possible, local needs assessments should be informed by the latest available information". The NPPG also makes clear that "this does not automatically mean housing assessments are rendered outdated every time new projections are issued".

Richard Pestell, director at consultancy Peter Brett Associates, warns against "knee-jerk reactions" in instances where councils are facing a significant increase in household numbers compared to the previous figures. The numbers, he said, "broadly project forwards the same changes seen in the previous five or six years". This, he argues, is "quite a short period" and spikes are often due to a one-off event in that period, such as a university expansion or the completion of a major housing development. If the projected increase has risen due to such one-off events, councils should use "common sense" in considering whether evidence bases or local plans needs updating, Pestell added.

Alex Ground, a partner at law firm Russell-Cooke, said that when a plan is nearing adoption, rather than being redrafted, authorities should carry on and promise a review. This is "what the review mechanism is for", she said.

Liverpool City Council’s plan is one such case. According to NLP, the rate of household growth in the city is predicted to outstrip that of other authorities in Cheshire, Greater Manchester and Merseyside, with the annual growth rate in the latest projections 361 households higher than contained in the 2012-based figures.

However, a spokesman for the council said: "In Liverpool’s case, DCLG do not want the new projections to delay the local plan, even though they suggest that more homes may be needed than previously anticipated." He added that the authority will shortly be publishing a draft local plan "based on a new strategic housing market assessment which, having used the 2012-based sub-national population projections (SNPP) and household projections, may not reflect Liverpool’s actual future housing needs". DCLG, he added, "want us to address the implications of the new figures though an immediate review following adoption".

In cases where current figures show an increase, commentators say that developers seeking to justify schemes on the basis of housing need are likely to see their hand strengthened. But Liverpool City Council’s spokesman said: "What the figures don’t tell us is what the full objectively assessed need (FOAN) for new housing is. The SNPP and the household projections are only two building blocks in the FOAN calculation. The scale of any change to the FOAN may not be proportionate to the change in the SNPP or household projections." 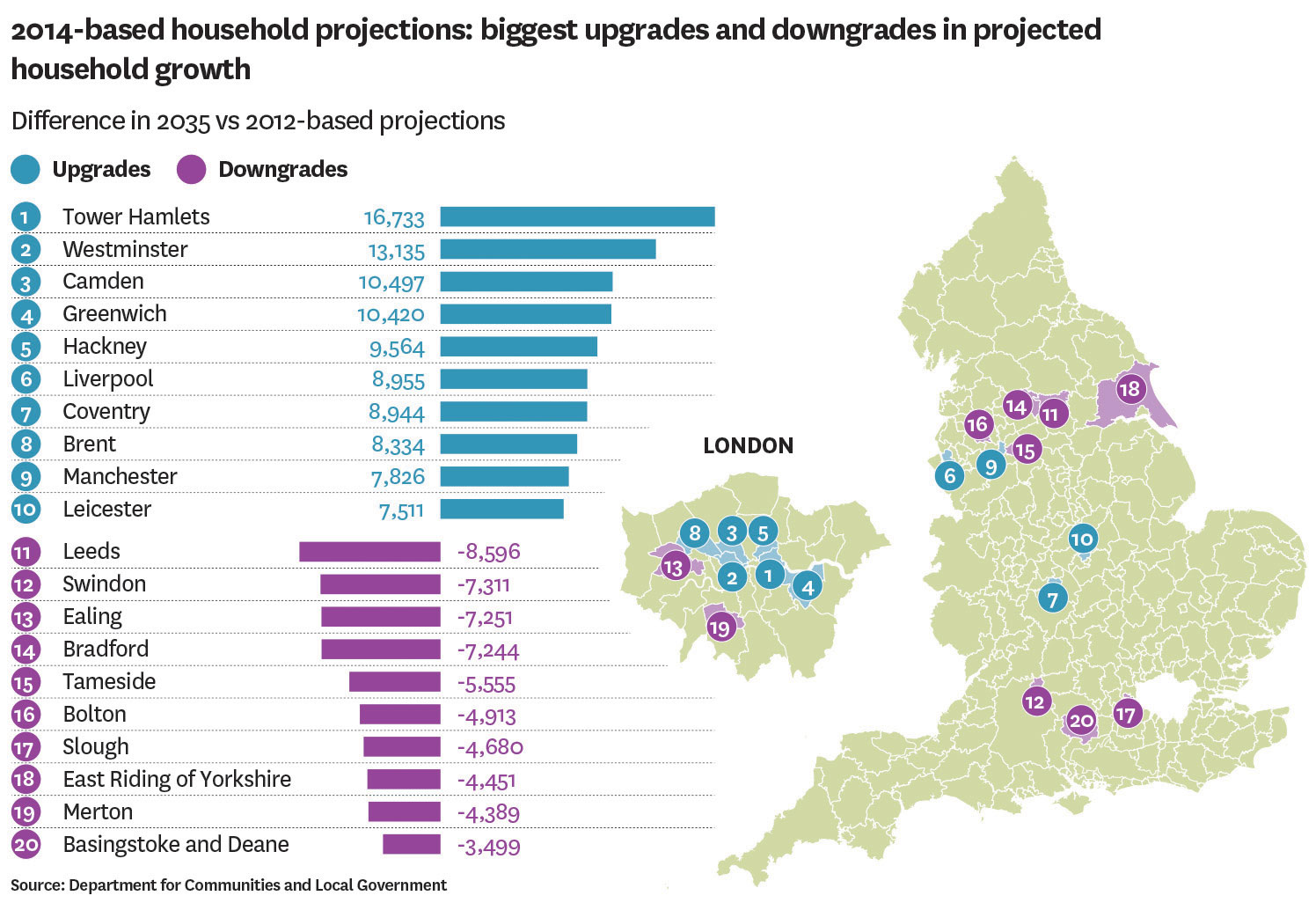