In February 2011, the former coalition government introduced the New Homes Bonus (NHB) mechanism, with the aim of encouraging local authorities to grant planning permissions for the building of new houses in return for additional revenue. Under the scheme, the government matches the council tax earned by local authorities from each new home built, converted or brought back into use over a six-year period.

But has the bonus changed councils’ approaches? Dr Aidan While, director of research at Sheffield University’s Department of Urban Studies and Planning, whose team was involved in the scheme’s official evaluation, argues that its impact has been limited. "Given the politicised nature of planning, we found that local authorities that were resistant to housebuilding were unlikely to be swayed by the amount of money offered under the NHB scheme", he said. He added that councils moving towards a more pro-housing stance in their policies would not be guaranteed payouts because NHB payments are only made on completion - a factor that he said further diminishes the incentive.

One of the big winners in the most recent round of NHB allocations was the London Borough of Tower Hamlets, which will receive £28.6 million in 2016/17. A spokesperson for the borough told Planning that while it is not possible to point to any specific evidence that completions in Tower Hamlets have increased as a result of the bonus, "the NHB does recognise the work we do to build affordable housing for people in the borough".

Birmingham City Council made the second highest gain: it is set to receive £21.1 million in 2016/17. Waheed Nazir, strategic director of economy at the council, describes the scheme as an "important tool to help accelerate delivery against housing need in the city, particularly affordable housing". However, asked if the bonus had changed the council’s approach, he said: "Even if we didn’t receive the money, the National Planning Policy Framework and the local plan still require us to meet our housing need."

Under proposals published by the DCLG in December 2015, NHB payments could be withheld from councils that fail to submit a local plan by 2017/18. In England, 66 authorities that have yet to submit a plan for examination could lose out on £28.1 million if they fail to meet the target, according to an analysis by Planning (see infographic).

While Nazir says he understands the government’s motivation to "ensure local plans are produced", he is sceptical about the impact of the sanction: "I don’t think it would speed things up," he said. "The production of a local plan is a complex, process, which most authorities required to put a plan in place are working through. But we put our local plan in place not because we were worried we’d lose out on the NHB, but because we felt it was important to meet the housing and growth needs of the city. I believe that is probably the case for most local authorities."

His view is echoed by While, who says that there are "plenty of [other] good reasons" for councils to have a local plan in place, such as the threat of being liable to challenge if they do not have a five-year housing land supply and the prospect of central government intervention if plans are not produced by early 2017. 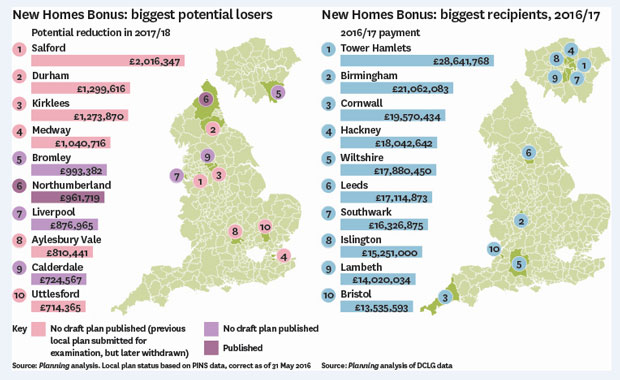