Pinsent Masons is top of Planning's ranking of the most respected planning law firm for the third year running. The team came first by a large margin and is followed by Eversheds in second place - the same spot it occupied last year. Meanwhile, Hogan Lovells is in third place - up one compared to last year - with King & Wood Mallesons and Dentons in fourth and fifth respectively.

This year, we changed our methodology. Instead of relying solely on members of the legal profession to rate their peers, we focused our survey on those who use the services of planning solicitors. Planning consultants, planning officers, developers and local authority lawyers were asked for their views on the planning solicitors and law firms they most admired, while barristers were not asked to participate. Unsurprisingly, the survey results show some substantial differences to last year, particularly in the individuals category, though the tops of both tables are full of familiar names. 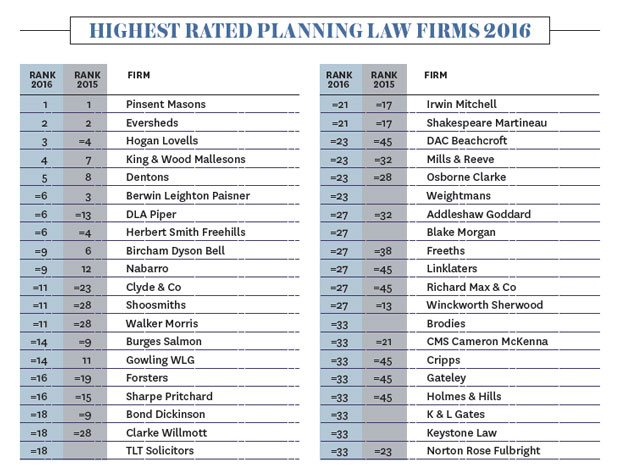 The leading law firm, Pinsent Masons, is home to a planning team that is "at the top of its game", according to one planning consultant. In his view, the firm houses "pretty much the number one team for residential work, particularly in London" and it is at the front end of other sectors, including transport, energy and infrastructure. Another respondent highlights a very strong team of professionals who "really know their stuff".

The demand for services in the housing market has been growing "exponentially", says head of planning and environment Iain Gilbey. His firm is involved in many residential schemes in London, including advising on plans for 7,000 new homes at Old Oak Common, as well as several large-scale "garden settlements" outside the capital. The practice is involved in a number of nationally significant infrastructure projects, including some of the UK's largest road schemes. It has been acting for dozens of High Speed Two petitioners, including Transport for London and the Mayor of London, as the bill which would grant the project permission passes through Parliament. Pinsent Masons is also advising NuGen on plans for a new nuclear station in Cumbria and has been acting for a group of local authorities on a power line connecting the Hinkley Point C nuclear power station in Somerset to the national grid.

Second in our survey is Eversheds. The firm is "very responsive", one planning consultant says, and is able to impart advice without being too technical. The consultant adds that the firm has key strengths in areas including the Community Infrastructure Levy, section 106 agreements, residential schemes and viability reviews. Another commentator says Eversheds' planning team, headed up by top ten-rated partner Stuart Andrews, consistently offers "succinct, commercially sound advice". In the past year, Eversheds has advised Network Rail and Birmingham City Council on the £600 million regeneration of Birmingham New Street Station and the £300 million redevelopment of the neighbouring Pallasades shopping centre. Eversheds also represented developers RWE in fending off a legal challenge to development consent for the Clocaenog Wind Farm in north Wales.

Third-placed Hogan Lovells has a "second-to-none reputation for providing sound advice" and represents clients without having to be aggressive, one local authority planner says. Recent cases include securing planning permission for the redevelopment of the Mount Pleasant Mail Centre in north London for about 700 new homes and 4,250 square metres of office accommodation. The firm continues to act for Braeburn Estates Limited Partnership on the mixed-use redevelopment of the Shell Centre on London's South Bank, and is advising on an application to develop Bishopsgate Goodsyard in Shoreditch. 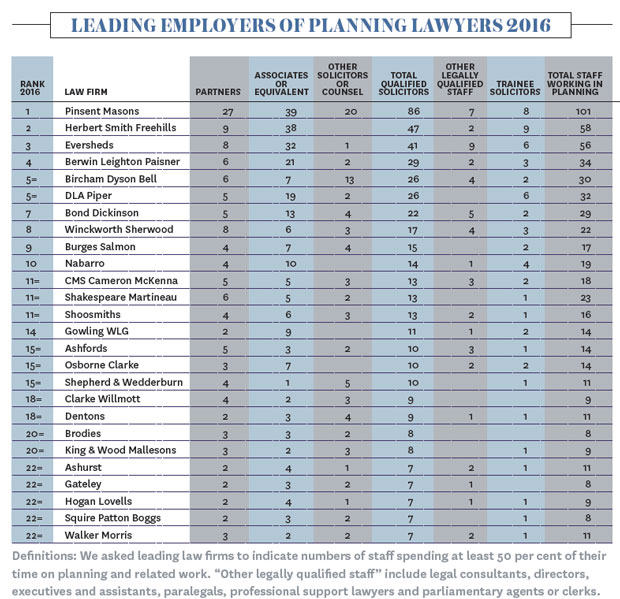 Up from seventh place in 2015 to fourth this year is King & Wood Mallesons. One consultant points to the firm's "range of experience across different sectors, its approachability and ability to work with clients as a team". Another points to strength across the team, particularly partners Simon Ricketts and Stephen Webb, who both feature in the top rated solicitors listings (see table, below), and managing associate Meeta Kaur. The firm has strengths across a range of sectors, they add, and takes a "very intelligent approach" to its work. Cases in the past year include acting for Notting Hill Housing Group on its regeneration of the Aylesbury Estate in Southwark and for Lands Improvement Holdings on a series of residential schemes and urban extensions in Bedfordshire, Hertfordshire, Oxfordshire and Cambridgeshire. The firm also acted for a consortium of landowners and developers seeking to deliver up to 5,000 new homes at the Cribbs Patchway new neighbourhood near Bristol.

Planning advice from fifth-placed Dentons is "always insightful" and the firm is not afraid to ask difficult questions, according to a planning consultant. The consultant adds that partner Stephen Ashworth, joint sixth in our individual survey, leads the team with "best in class" advice. Another says the planning team "is trustworthy, thinks outside the box, tests each brief and is approachable". In the past year, Dentons has acted for the Royal Borough of Greenwich on plans for 15,000 new homes on the Greenwich Peninsular, for a joint venture promoting new science and research facilities at Harwell in Oxfordshire, and for Sellar Group on its planned 65-storey tower in Paddington.

Outside the top five, several firms produced a strong showing compared to last year. High risers include Walker Morris in Leeds and Shoosmiths, which both moved to joint 11th from joint 28th last year, and Clyde & Co from 23rd up to joint 11th. Bristol-based TLT Solicitors, which didn't appear in last year's survey, is now in joint 18th.

King & Wood Mallesons' Ricketts tops the individual solicitors table for the seventh year in a row. In very close second is Michael Gallimore, partner at Hogan Lovells, who was third last year and has been a top five regular for the past 15 years. Ian Ginbey, a partner at Clyde & Co, is at number three.

The individuals' table shows more new entrants and high-risers than among the law firms. Trevor Ivory, partner at DLA Piper, Neil Baker, partner at Clarke Willmott, and Katherine Evans, head of planning and environment at TLT, are all ranked joint 11th, having not featured at all in last year's top 30. "I suspect my move last year to become UK head of development and infrastructure planning has caught the industry's attention," says Ivory. Further down the top 20 individuals, Sharpe Pritchard partner Brian Hurwitz attracted a particularly strong showing in nominations among council lawyers, reflecting the firm's success in building up its local authority clientele. 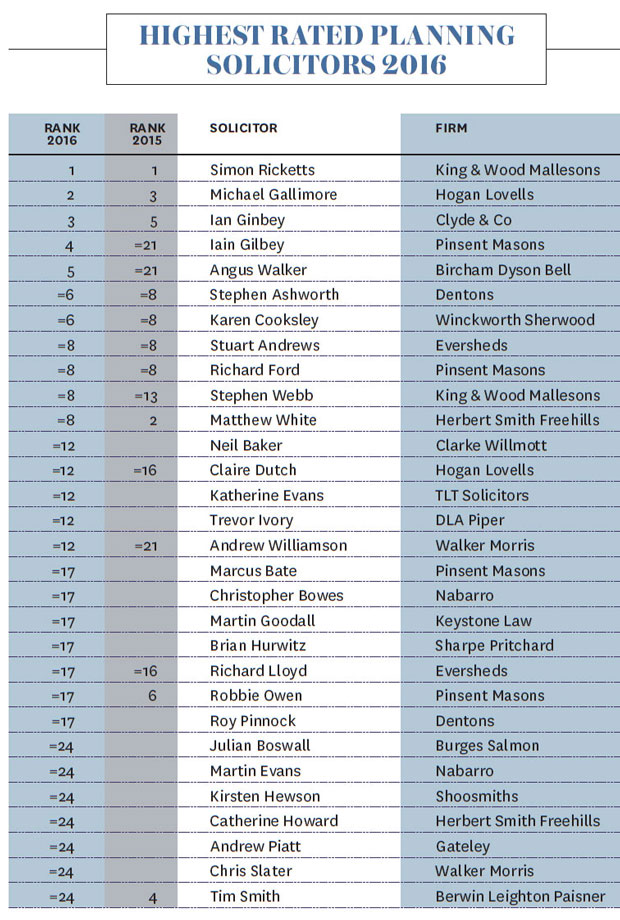 Iain Gilbey says Pinsent Masons' growth in manpower has been "purely as a result of our domestic expansion". By 2020, the firm wants to grow even more by "adding more international lawyers to our team," he explains. The three key areas of growth over the last year for the firm's planning practice have been housing, energy and infrastructure, Gilbey says.

There has been an increased demand for advice relating to onshore and offshore wind projects, solar and nuclear power, he says. With government subsidies for renewable energy being reined back, he adds, "there's been a general rush over the last 12 to 18 months to get projects under way before the subsidy regime reduces".

Matthew White, partner and head of planning, London, at Herbert Smith Freehills, says the doubling in planning solicitor numbers at his firm is mainly due to a merger with Australian law firm Freehills in 2012. Numbers are also up at Shakespeare Martineau, where the total staff complement in its Marrons Planning team includes six chartered town planners. Another firm that has seen high growth since 2009 is Winckworth Sherwood, where partner Karen Cooksley retained her top ten placing among the most respected individual solicitors. The firm has almost doubled its number of qualified solicitors since 2009 and raised its overall planning workforce from 17 to 22.

In the ranking of local authority planning solicitors, City of London Corporation comptroller Deborah Cluett comes top for the second year running (see table, below). This year we reinstated the vote for the top council legal team. Westminster City Council, covering a hotbed of development and enforcement activity, came way out in front. 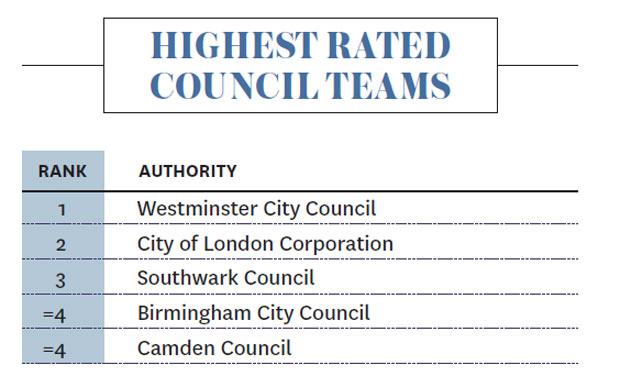 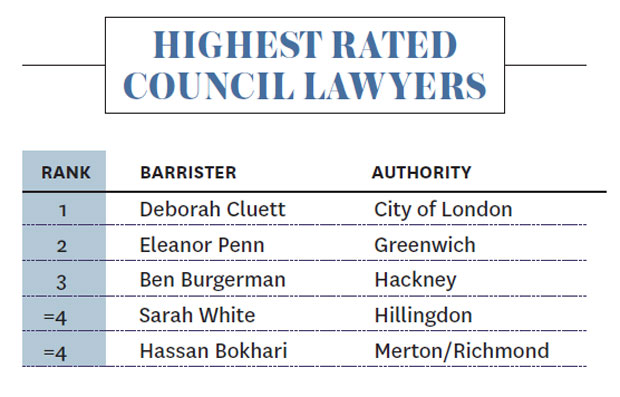 Ricketts is a keen observer of the world around him and brings this to his planning law advice, one planning consultant says. He adds that Ricketts gives pragmatic advice and is a "thoroughly nice person to deal with". Another says Ricketts has a "wealth of experience and is able to offer good strategic advice and keep things clear and concise". Notable cases in the past year include acting for British Land on its Blossom Street scheme in Shoreditch, which now faces a judicial review. He is also acting for Quintain on a revised masterplan for its 34-hectare Wembley Park development.

Gallimore's strength is his ability to look at an issue from all sides, one local authority planner says. He adds that Gallimore is "level-headed, jargon-free, thorough and the 'go-to' person for difficult problems". A planning consultant finds that Gallimore takes a "focused, low-key approach, while remaining sharp on the points that matter". In the past year, Gallimore has advised Royal Mail Group on the redevelopment of the Mount Pleasant Mail Centre in north London for 700 new homes and 4,250 square metres of office accommodation. He is also acting for Braeburn Estates Limited Partnership on the redevelopment of the Shell Centre on London's South Bank.

Ginbey is a "first-rate planning solicitor" who blends "forensic knowledge of planning law, a sharp focus upon commercial objectives and a ready wit", according to one planning consultant. He is also a strong team player and an excellent tactician, another says. Cases in the past year include securing planning permission on behalf of developer Commercial Estates Group for a 320-home scheme on a greenfield site in Hampshire following a public inquiry. He also advised Corinthian Land on its plans for a mixed-use sustainable urban extension in Canterbury, which were submitted last month.

Gilbey is one of the sector's "biggest hitters", advising on some of the highest-profile residential schemes in London, according to one planning consultant voter. He is also a "sharp-witted" lawyer who delivers practical advice and takes pains to understand projects, says another. Gilbey advised the landowner in the successful High Court defence of Dover District Council's granting of permission for 521 new homes and a retirement village partly within an area of outstanding natural beauty. He also advised the Candy brothers on their effective appeal against the refusal of plans for the Duke's Lodge redevelopment scheme in Holland Park, west London.

Walker, chair of the National Infrastructure Planning Association, is pre-eminent in the field of major infrastructure, according to one planning consultant. He adds that Walker's infrastructure planning blog is a must-read for those involved in the sector and his experience and track record "speaks for itself". Another says Walker is one of the leading solicitors when it comes to nationally significant infrastructure projects (NSIPs). Walker is preparing an NSIP application for the London Paramount Entertainment Resort near Ebbsfleet, Kent. He is also helping to progress the Lower Thames Crossing, a proposed new tunnel between Essex and Kent, for Highways England.

The annual Planning Law Survey has been running since 1998, helping planning professionals identify the solicitors, firms and barristers best placed to advise on the legal issues surrounding development projects and plans. Last month, we emailed more than 7,000 private planning solicitors, planning consultants, planning officers, developers and local government lawyers to ask them for nominations. We also circulated the survey to members of professional bodies the Planning Officers Society, ADEPT and Lawyers in Local Government. We received responses from 273 individuals, including 78 private solicitors.