Earlier this month, the university admissions service UCAS published data on applications for university degrees. The figures show a sharp fall in the number of people applying for places on planning degrees, from 4,130 in 2008 to 2,535 in 2013 - a slump of nearly 40 per cent. But statistics also show that the number of applications is starting to rise. In 2015, the number of people applying for planning degrees was 3,105 - up 22 per cent on 2014, the figures revealed.

Planners agree that the primary cause for the decline in number of applications to study planning degrees was the economic downturn. With planning closely linked to the built environment, which, in turn, depends on economic growth, a lot of A-level students were nervous about entering the profession, said Dr Tim Townshend, director of planning and urban design at Newcastle University's School of Architecture, Planning and Landscape.

Commentators also agree that the recent upturn in application numbers is because of the UK's economic recovery. Andrew Close, head of careers, education and professional development at the Royal Town Planning Institute (RTPI), said that students may have viewed the profession as a good employment prospect after the Higher Education Statistics Agency last year "released figures showing that planning and architecture is one of the top disciplines for student graduate employment".

However, even though the most recent figures are encouraging, (see infographic below) the low numbers of recent planning applicants and therefore graduates, could have repercussions in years to come. Mike Best, an executive director at consultancy Turley, says that five years down the line, middle managers looking for promotion may struggle to find experienced enough people to replace them, because "when you're looking for good senior people you may suffer the consequences of a shortage of graduates ten years ago".

Newcastle University's Townshend said that owing to a shortage of planning graduates between 2008 and 2014, many graduates are finding themselves in "incredibly senior positions" fresh out of university. Asked whether recruiters have handled the shortage of qualified planners by recruiting from overseas or hiring people without planning degrees, commentators all said that they have not seen evidence of this.

Townshend explained that he has seen a lot of undergraduates sign up for accredited planning masters degrees, and that "if there were opportunities for them to get a planning job (without such qualifications) they wouldn't necessarily do that."

Close says RTPI has responded to the problem by launching a bursary scheme for postgraduates and an apprenticeship scheme. Last year, it part-funded 44 students' masters degrees, "and we're looking at how we can work with the sector to do it again this year," she said.

James Fennell, chief executive at consultancy Nathaniel Lichfield & Partners, said: "We don't have a problem recruiting graduates and never have. We start the process early and we have a lot to offer."

Townshend raises concern over how quick recruiters of planners are to snap up soon-to-be graduates. Often, masters students are being recruited three months before finishing their degrees, which means their academic work suffers and a lot of students "are really struggling, some having complete breakdowns", he claimed.

"People are coming through with relatively mediocre passes who we know could have done much, much better," he says. This situation, he explains, may not seem to be an immediate problem for students in the short term. However, he added that, in the longer term, these post-graduate students could be negatively affected should they seek to apply for a new career with a "relatively ordinary qualification". 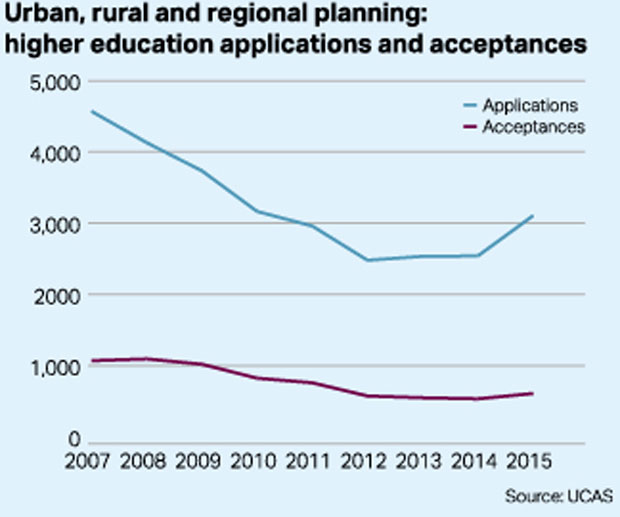