The case that attracted the most downloads by COMPASS users, according to site managers DCS, was communities secretary Greg Clark's decision in late October to permit 39 homes at Earls Barton, Northamptonshire, despite the scheme clashing with a well advanced neighbourhood plan (NDP) that an examiner had recommended should go to a referendum. Clark found the council's estimates of housing land supply too optimistic and decided that the proposal's limited scale would not undermine the emerging plan

The second highest number of views went to January's decision by Clark's predecessor, Eric Pickles, to reject plans for homes, a retirement village and community uses on the edge of Crewe, despite a five-year housing land supply shortfall. Pickles found that the scheme's benefits, including its contribution to resolving the shortage of housing land, did not outweigh the loss of part of an established green gap and that allowing it could be seen as pre-empting a local plan examination

Prejudice to another emerging NDP for a Northamptonshire village influenced Clark's decision in August to refuse a recovered appeal for up to 80 homes in a special landscape area near West Haddon. The draft NDP, which was heading for examination, identified the site as protected green space. Clark found that the proposal would damage the village's form and setting.

In June, concerns over the loss of a site allocated for employment in an emerging local plan led Clark to reject plans for up to 510 homes, retirement homes and a local centre near North Ferriby in the East Riding of Yorkshire. In the first decision letter issued by the incoming secretary of state, he agreed that substantial weight should be attached to the proposals' affordable housing contribution, but found the applicants had shown no pressing need for extra sites on supply grounds.

Viability issues were raised in the most-viewed inspector's decision from this year, involving plans to redevelop an army training centre site in London. The council said the purchase price was excessive and artificially suppressed the proportion of affordable housing that could be provided, but the inspector decided in September that the amount paid adequately reflected policy requirements. Despite this finding, he dismissed the appeal on design grounds.

Sixth on the list was the impact of plans for up to 500 homes and community facilities on ancient woodland on the edge of Maidstone which was explored in a case decided in October. The secretary of state passed the scheme after finding that its social and economic benefits would not be outweighed by the loss of at most 1.8 per cent of the designated woodland area.

Two Pickles decisions made joint seventh place. The first involved the rejection of four recovered appeals for almost 6,000 homes around Aylesbury in January, on the basis that their environmental and transport impacts would outweigh their social and economic benefits. Factors cited by the inspector included damage to the natural or historic environment, landscape impact, lack of clarity over bus service provision, quality of provision for pedestrians and cyclists, concerns over whether road improvements would be implemented, coalescence with outlying villages and local opposition.

In the second, green belt harm was the crucial factor in Pickles' dismissal in the same month of plans for 500 dwellings, along with commercial and community space, on sports fields at Purfleet, Essex. While giving significant weight to the scheme's valuable contribution towards housing land supply in an area facing a chronic shortfall, he concluded that this was outweighed by harm to the stated purposes of green belt designation.

Viability arguments over affordable housing quotas featured in a ministerial decision issued in May to approve up to 430 homes, a care home and a community centre on the edge of Exeter. The local authority held out for 40 per cent affordable provision, but the inspector agreed that this should be reduced in line with an emerging local plan policy requiring 25 per cent provision, thus giving the landowners enough incentive to sell the site.

Back to Cheshire for the tenth case, with an inspector finding that plans for up to 113 homes near Northwich represented a sustainable extension despite the council showing a five-year land supply. He judged that the proposal would cause minimal harm to the local environment and the opportunity to deliver social housing and new jobs should be given due weight. 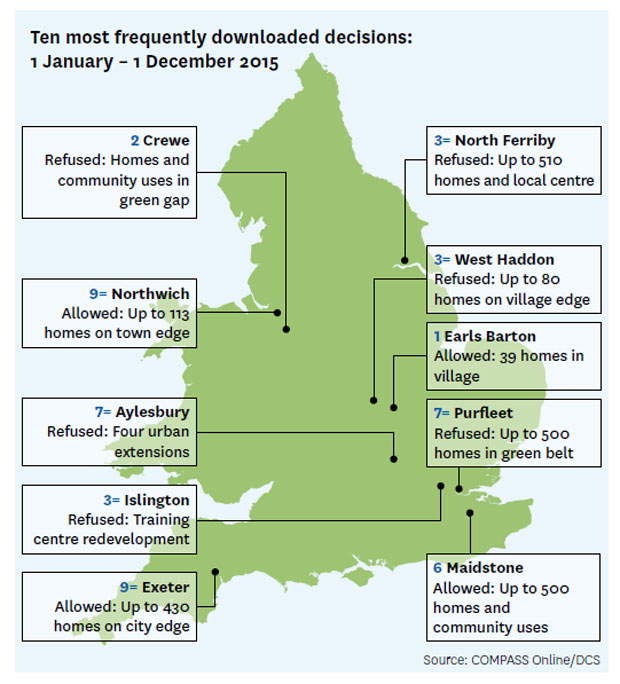