Last month’s Spending Review contained plans to further bolster the planning powers of Greater Manchester’s elected mayor. The figurehead – due to be elected in 2017 – already has powers to draw up a statutory spatial framework for the conurbation.

But the Spending Review goes further, saying that the city-region’s mayor is to be given "the power to introduce a Community Infrastructure Levy (CIL)".  A document published by the Treasury alongside the Spending Review said that the plan would be subject to the "necessary legislation receiving Royal Assent", and would require "unanimous approval" of the mayor’s cabinet, formed of Greater Manchester’s ten council leaders.

Details of how the levy will operate have yet to be set out. A spokesman for the Greater Manchester Combined Authority said that options are being worked up for the scheme, which will be consulted on in due course. Commentators said it is not yet clear whether the levy is intended to operate in the same way as the capital’s mayoral CIL – which is charged alongside London boroughs’ own levies to raise funds towards the Crossrail project – or as a single levy charged by the mayor, with no separate council charges.

Matthew Spilsbury, an associate director in consultancy Turley’s Manchester office, said that should a Crossrail CIL-style levy be introduced in Greater Manchester this would require local authorities which have already started work on – or adopted – their own charges to revisit their charging schedules. "It could actually slow down the whole CIL process if it is not correctly managed," he warned. But Spilsbury pointed out that there has to date been limited progress in bringing forward CIL proposals in the city-region, with only Trafford Council to have adopted a levy, and five of the ten authorities yet to publish proposals for consultation.

Doug Hann, a director in consultancy Indigo Planning’s Manchester office, said that CIL has not been "embraced enthusiastically" by the Greater Manchester authorities, with some town halls concerned that the levy could disincentivise development from coming forward in their areas.

He points out that the authorities which have moved forward with CIL – such as Trafford – are those with fewer regeneration areas. "Authorities with the greatest regeneration needs have been reluctant to push it forward," he said. Experts raised concerns over the potential impact of the levy on development viability.

Colette McCormack, partner at law firm Winckworth Sherwood, said: "The reason a lot of local authorities in the North have not adopted CIL is that they see it as stymying development." Spilsbury said that the city-regional nature of the CIL could alarm the development industry.

"There will be concerns from major developers that any contributions they are making are diverted a substantial distance from their sites," he said. Emily Williams, an associate at law firm Irwin Mitchell, said that the development industry may initially be wary of the levy, but added that a mayoral CIL may be simpler for developers and could prove to encourage other development, such as discounted Starter Homes, which are exempt from paying the levy.

Commentators agreed that to win the support of developers – as well as the necessary backing of all ten Greater Manchester authorities – receipts from the levy would need to fund major infrastructure with clear benefits for the whole conurbation. Spilsbury suggested that to get buy-in from the development industry "there needs to be some beauty parade of major infrastructure projects", such as an integrated public transport system, an expansion of the city’s tram network, or a wider upgrade to the city’s rail infrastructure. Hann added that receipts from the levy would need to go towards a scheme akin to London’s Crossrail project in order to secure the backing of all ten Greater Manchester authorities. "The project would need to be of a similar strategic scale [so] that all the authorities would see the value of it," he said. "I can see that getting the ten local authorities to all sign on the dotted line will require the project to be something so obviously beneficial to the entire city-region that it would be difficult to object to it."

The proposals have received a lukewarm response from Trafford Council – which adopted its own levy last year – and Salford City Council, which has opted not to introduce a CIL and instead recently published supplementary planning guidance on planning obligations. Sean Anstee, leader of Trafford Council, said that it would "seek a scheme that complements and enhances our  existing arrangements". Derek Antrobus, executive lead member for strategic planning for Salford City Council, said that it had not prepared a CIL due to site viability considerations.

"In current -circumstances in Salford it would do little to -contribute towards infrastructure requirements  and might deter potential investment in developing sites because of its inherent inflexibility," he said. "We will always keep our options open and see how the CIL regime evolves."

Should the levy secure backing from all Greater Manchester’s constituent authorities, there are question marks over how much cash could be collected. Spilsbury said that the proposed levy’s potential receipts might be quite modest compared with the London mayor’s CIL. "When you look at the local authorities that have either adopted, or are preparing to adopt, CIL, these rates are very modest, compared to London’s." 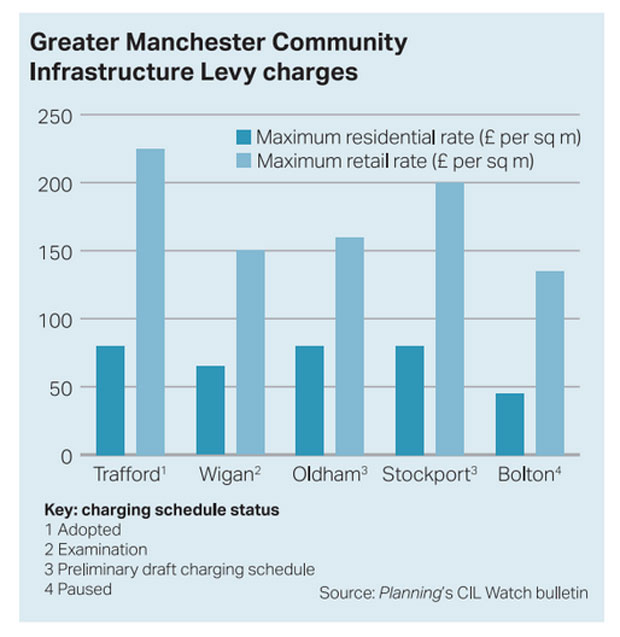