The chancellor revealed plans to introduce a new test for councils "to ensure delivery against the homes set out in local plans within a reasonable timeframe". But the government has provided no extra detail about how the test would operate.

Jon Suckley, a partner at consultancy HOW Planning, said in one sense the measure is "positive", adding that it could help housing delivery. But he added: "It's just another layer of targets that councils have to meet, but their resourcing issues are not actually being addressed. If councils have housing delivery identified for a year in the local plan or a five-year period, it would only be fair for the delivery test to relate to that number. If it is a percentage, there's no incentive for the council to deliver the amount of housing to meet its objectively assessed housing need."

Ghislaine Halpenny, director of communications at lobby group the British Property Federation, said the proposal is largely "a good thing". But she said local plans must be shorter, more streamlined and clearer for the measure to work and councils must be properly resourced. She added: "Local authority planners have to be very clear about what their plan says and what they want. It will really encourage councils to ensure that they pay proper attention to the duty to cooperate."

Meanwhile, the government said it would strengthen the performance regime, ruling that if more than ten per cent of a council's major decisions are overturned at appeal, its planning powers could be transferred to central government. "Wider circumstances, such as the status of the local plan and whether appeals relate to this, will be taken into account," it said. Latest planning performance statistics show that seven district authorities had more than ten per cent of major applications overturned on appeal in the 24 months to December 2014 (see infographic, below).

Clare Eccles, knowledge development lawyer at law firm Berwin Leighton Paisner, said lowering the threshold to ten per cent will make it "quite easy" for councils to be sanctioned. She added that the "critical relationship" between developers and authorities could be undermined if councils are placed in special measures and the Planning Inspectorate takes control of decisions. 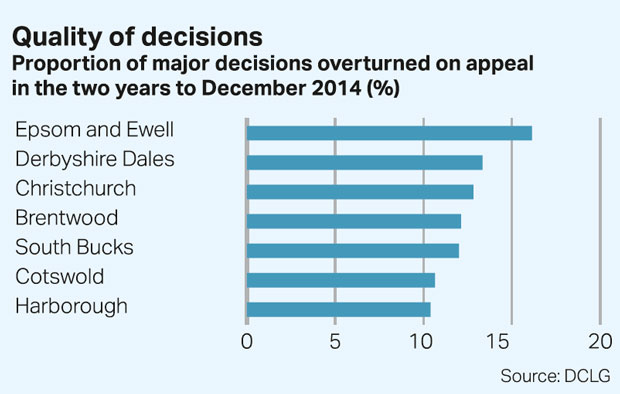