Since 2010, town halls have had central funding slashed by 40 per cent. Despite this, chancellor George Osborne insisted that "public satisfaction with our local government services has risen," in last week's spending review.

The central government grant to councils will drop from £11.5 billion in the current financial year to £5.4 billion in 2019/20 (see infographic, below). But to make up for the shortfall in government grants, the chancellor set out a number of measures intended to help councils generate income.

These measures mean that "by the end of this parliament local government will be spending the same in cash terms as it does today", Osborne said. However, local government leaders are more sceptical. Lord Porter, chairman of the Local Government Association, said town halls face pressure for further "demand-led costs" of £10 billion by the end of the decade, adding that local services "will have to be drastically scaled back or lost altogether" after the spending review. He argued that after five years of finding ways to save money, most have already been made.

His view is echoed by planning experts, who have raised concern over councils' planning resources. According to an analysis by planning consultancy Nathaniel Lichfield & Partners (NLP), government cuts have already resulted in planning departments seeing their budgets shrink by 55 per cent between 2009/10 and 2015/16 in real terms.

NLP associate director Joe Sarling said he is not convinced that "there is enough wiggle room to further cut" teams' budgets, as councils "may well have cut their planning departments to the bare bones with no room for efficiency savings to be made." However, he predicted that councils may still look to cut planning services all the same, as these are not a statutory requirement.

Anna Rose, senior vice-president at the Planning Officers Society, warned that councils tempted to cut their planning services are more likely to target their policy teams than those processing applications. "Most councils realise that spending on development management services is critical because the applications are in and they are usually getting to the ears of the politicians on the ground. But it's much harder to spot when councils haven't got the resources to make their local plans."

Rose said that the fact that working to progress a local plan does not generate any income - as opposed to fees from applications - means that "often it's the policy teams that are depleted". With the government recently setting the deadline for all local plans to be produced by early 2017, Rose suggested that councils could look to outsource plan-making or seek to work with neighbouring, better-resourced authorities.

Sarling said he believes that out of all the measures handing more powers to local authorities, the business rate retention power is the most significant. But Rose argued that the way in which councils will benefit from this new power will vary hugely across the country. While district councils may well be able to spend the extra money raised on their planning services, she warned that unitary authorities may not be able to do likewise because they face heavier budgetary pressures from services such as adult and children's social care. "Our big worry is that some areas don't have the ability to grow and therefore they're effectively cut off from that funding stream," she added.

Experts doubted that councils would have much success if they seek to boost business rate income by supporting a disproportionate increase in the number of commercial developments. Sarling thinks that this is unlikely to work: "You would only be able to build new employment sites if there's the demand in the labour market and for the product they are selling."

Rose argued that, with national planning policy so focused on eliminating the current housing shortage, councils "couldn't plan for business and retail and then keep those sites vacant without the demand being there, because those sites would eventually be needed to wipe out the housing shortage". 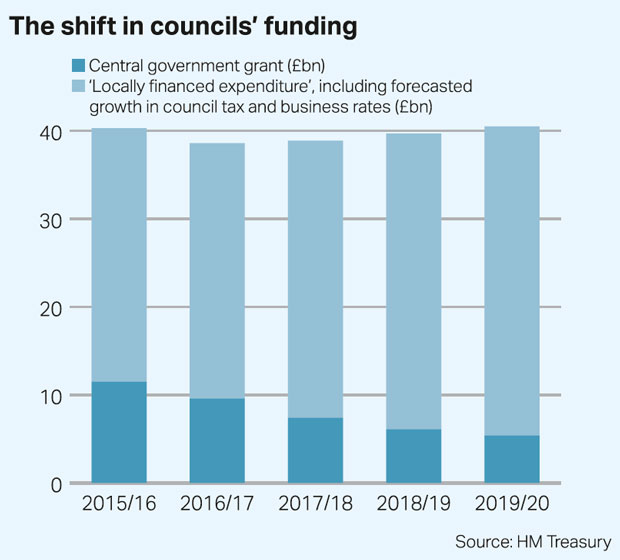