Earnings for planning consultants are up significantly this year, fee income figures supplied by 95 firms for this year's Planning Consultancy Survey suggest.

Highest earner RPS Group reports a ten per cent increase, citing "considerably more" private residential work, despite a marginal net increase in fee-earners and a small net drop in chartered planners. RPS Planning and Environment operational director Chris LeCointe expects 2016 to bring growth in the housing sector and infrastructure investment, particularly road and rail. "The outlook is generally positive and, with interest rates set to remain stable, consumer confidence should continue to underpin growth throughout the UK," he says.

At transport market leader Arup, director Nicola White says income growth of almost £2.4 million last year was in line with expectations. "Some of it has been driven by larger commissions, such as High Speed 2," she says. Citing various projects in the pipeline, Atkins head of planning Joanne Farrar says: "Transport will be our highest-earning market sector, due to significant current and planned investment."

At WYG, no increase in cash terms is reported. According to UK head of planning Steven Fidgett, this is due to revised internal procedures for delineating areas of operation. "Our UK business as a whole has grown 15 per cent to around £84 million this year," says Fidgett, adding that his reorganised planning team is on course to meet "and hopefully outperform" a targeted ten per cent rise in 2015/16.

Savills' planning earnings rose by more than ten per cent in 2014/15, a period that preceded its May takeover of Smiths Gore. But earnings are down in the energy sector, says head of planning David Jackson. "We anticipate a further reduction in energy market business in the new year as tariff support is withdrawn, but see this being replaced over time by increased investment that is not reliant on tariffs."

Earnings appear down at Barton Willmore, but senior partner Mark Sitch says its latest income figures exclude some masterplanning and landscape work that was counted in its 2013/14 returns. Sitch says core planning earnings rose by 13 per cent in 2014/15. For 2015/16, he adds, initial forecasts of five per cent growth now appear optimistic, based on performance in the first half of the financial year. "Our business is closely aligned to the fortunes of the UK housing market. Our growth will be influenced by interest rates and availability of funds for property development and major infrastructure," he says.

The housing market was also a key factor in a ten per cent rise in earnings at Pegasus Group, says business development manager Sue Corrigan. The firm's prediction of five per cent growth in 2015/16 is based on current billing levels and new disciplines coming on board. "Our planning team has grown to meet demand," Corrigan adds, forecasting continuing growth at its year-old London office and Gloucestershire-based heritage team.

Nathaniel Lichfield & Partners managing director James Fennell says 2014/15's ten per cent fees rise was in line with expectations and expects similar levels this year, "or quite possibly more". He says: "The property market looks good for growth next year. Interest rates will remain low, and addressing the shortage of housing and ongoing infrastructure investment will underpin high levels of demand for planning services. Retail, leisure and commercial work is also showing sustained growth, and we expect this to continue next year."

At Amec Foster Wheeler, head of planning, transport and design Clive Harridge expects significant and continued growth in residential next year and beyond, thanks to greater government encouragement for housebuilding. "We have an expanding team working on major infrastructure and I expect growth will continue through 2016 in the energy and transport sectors in particular," Harridge says.

Following a "conservative approach" to growth last year, SLR Consulting director David Sandbrook expects fee income to rise by ten per cent this year. "Our work on National Grid's North West Coast Connections electricity transmission project has driven growth in our regional offices and given us confidence to recruit new staff," he explains.

Seven of this year's 50 highest earners are predicting fees growth of at least 20 per cent in the year to March 2016. Bidwells partner David Bainbridge puts a 25 per cent estimate down to a broadening service offer on retail planning and housing need assessment, team expansion in London and Oxford and a five per cent rise in fee rates - the firm's first "meaningful" increase since 2008.

Quod is similarly optimistic. "We saw 16 per cent growth between 2014 and 2015 and 20 per cent is not unrealistic in a stronger market," says director Sarah Price. "We have a significant number of new, large complex projects in the pipeline." Projecting a similar growth rate, DLP Consulting Group managing director Simon James points to "numerous new instructions" for new settlements, urban expansion schemes and major commercial projects, as well as a "lot more appeal work".

More consultancies than ever before disclosed daily fee rates for this year's survey, showing a range from as little as £150 to £2,000 upwards for the most experienced consultants (see table, right). Consultants are more optimistic than last year over prospects for increasing fee rates. Almost two-thirds of firms expect to push up rates during the 12 months to next September, compared to just under half reporting actual rises over the past year (see graphic, bottom right). Peter Brett Associates director Kieran Rushe expects a three per cent rise "because planning is undervalued".

But Firstplan director Mike Woolner warns that clients are still very cost conscious. "We are keen to keep our fees to what we perceive as a cost-effective level," he says. Terence O'Rourke managing director Tim Hancock says that, rather than raising rates across the board, his firm is increasingly basing a proportion of charges on successful project outcomes. "This approach appears more acceptable to our clients. With our 94 per cent success rate, it has been a good strategy," he says.

This year, we have again calculated average income per planning fee earner (see table, top right). In some cases, high ratios are clearly associated with above-average fee rates. At Quod, where charges for the most senior director can top £2,600 a day, Price cites a growing need for "planning consultants who understand all the factors that should be relevant to a planning decision and can provide strategic, informed advice".

Commenting on Barton Willmore's charges of up to £2,212 a day, Sitch says the firm's involvement in some of the UK's largest and most complex planning projects "demands high-quality people and substantial investment in a national infrastructure to support our business, which our clients recognise and are willing to pay a premium for".

Others achieve high averages despite relatively middling fee rates. Axis director David Clough puts high productivity of £165,000 per fee-earner down to a flat structure and a focus on minimising non-productive hours. "Senior members of the technical team, including those at board level, spend a high proportion of their time on fee-earning work," says Clough. 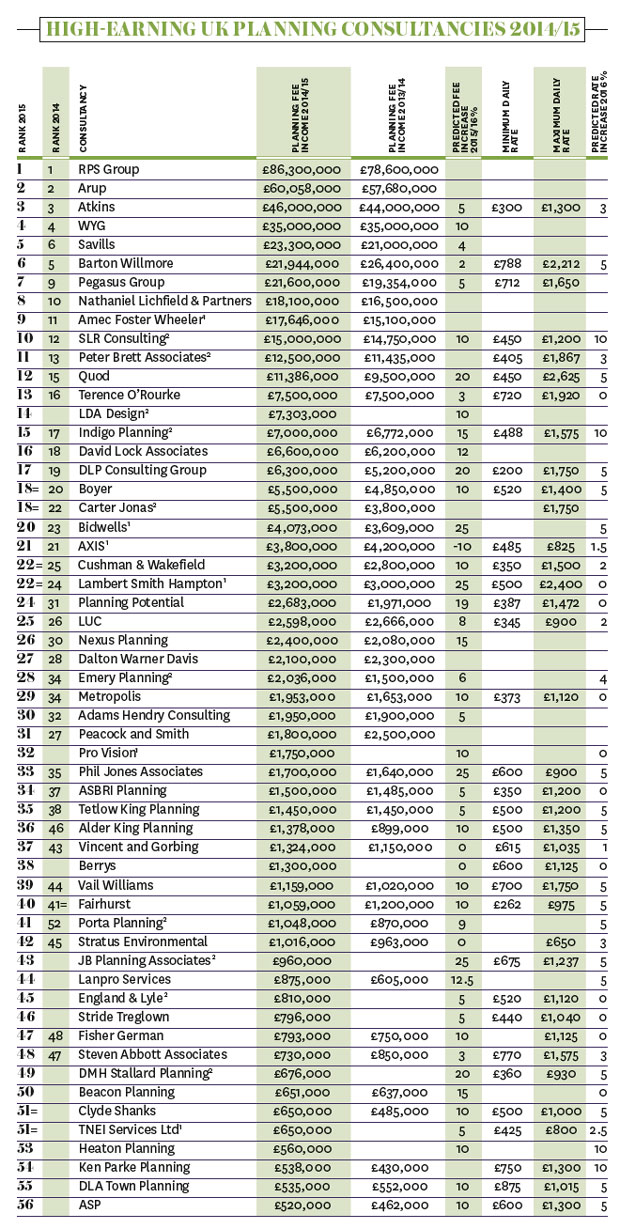 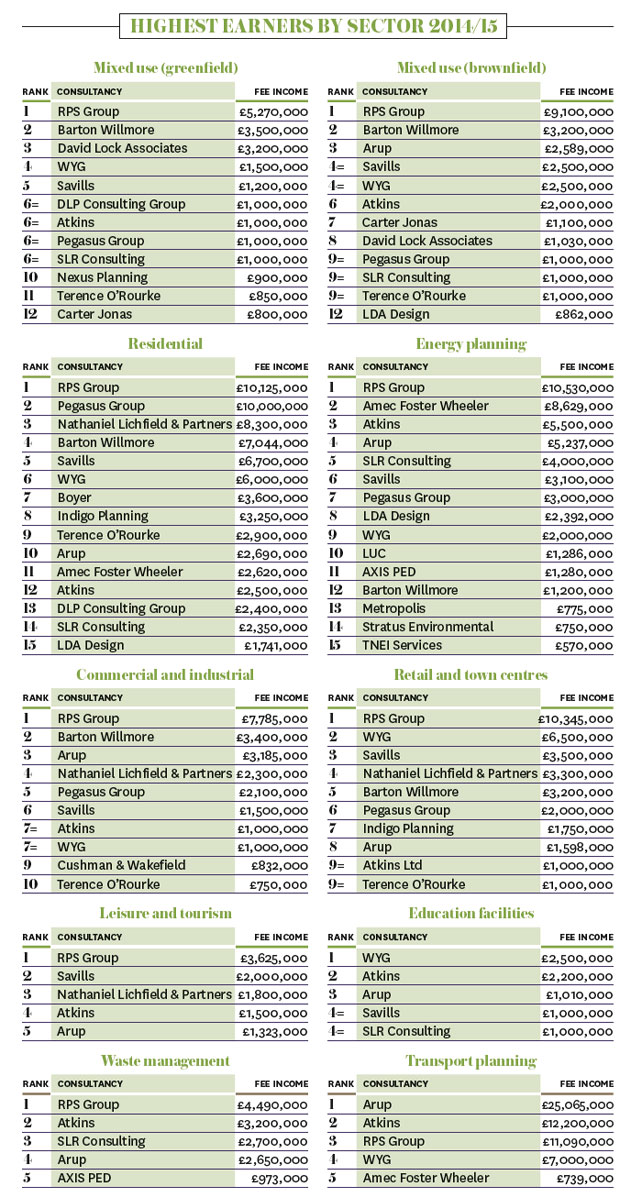 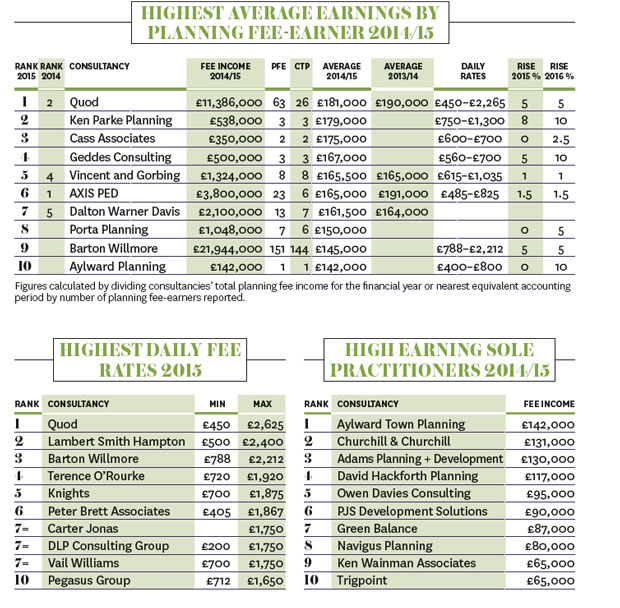 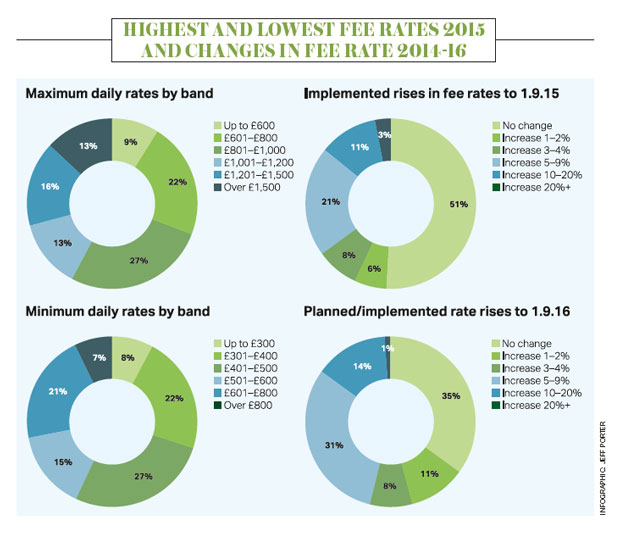