In line with last year's optimism, planning consultancies remain positive about growth prospects. Of the 50 biggest firms listed here, 15 strongly agreed and 22 agreed that they expect their planning team to grow in the next 12 months. Only three were "unsure", while ten gave no view.

The table (right) gives staffing details of 102 firms with three or more chartered planners, showing a total of 1,985 full members or fellows of the Royal Town Planning Institute (RTPI). Collectively, the ten leading employers were fielding 987 chartered town planners on 1 September this year, 31 more than in the 2014 survey. All but one have boosted numbers since last year, including merger-fuelled increases at Capita and table-toppers Savills.

Nathaniel Lichfield & Partners managing director James Fennell says the business has grown significantly in the past year, especially in infrastructure and housing. "Business prospects are leading to recruitment now and we expect this to continue during 2016. It takes time and effort to find the right people," he says. The firm's new offices in Bristol, Edinburgh and Reading will all grow next year, he says: "After the independence referendum, the Scottish property market is really picking up." 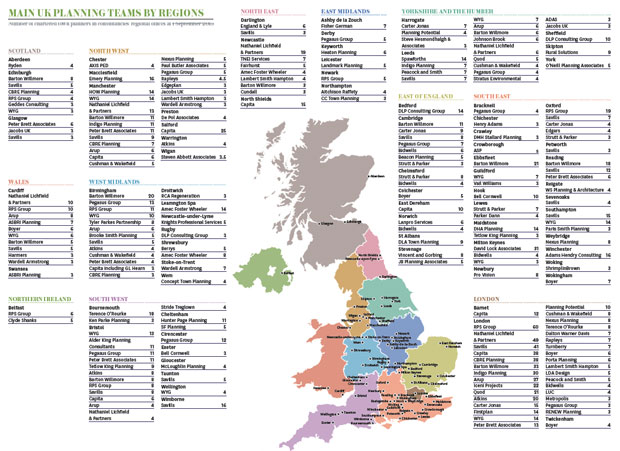 Planner numbers are up by six and planning fee-earners by nine at Indigo Planning, and four more graduate planners have been hired in recent weeks. "We have taken on people in community engagement, regeneration, agriculture and energy, and built up finance, graphics and marketing support," says managing director Phil Villars.

While planning fee-earners have increased by 40 at Atkins since the 2014 survey, with an emphasis on infrastructure and economics, qualified planners have stayed level. "It is difficult to get more than a few good CVs, but we recruited sufficient numbers this year," says head of planning Joanne Farrar. A muted response to adverts for junior staff in London may suggest potential candidates are leaving the capital for cost reasons, she speculates.

At Arup, planner numbers are up seven and planning fee-earners by almost 100 this year. "We have grown the business with highly qualified planners who operate in a range of business areas, supported by specialists in areas such as heritage and marine spatial planning," says director Nicola White.

CBRE Planning, which has increased chartered planner numbers by three, is looking to expand its links with the London boroughs, according to managing director Emma Davies. This "gives clients a real advantage when dealing with complex projects," she says. The firm has strengthened its retail and strategic land capacity and made senior hires in Manchester and Birmingham, she adds.

Terence O'Rourke's chartered planner numbers remain unchanged. Managing director Tim Hancock expects increased demand over the next year, with the Housing and Planning Bill published and local plans gradually coming to fruition. "But we are reluctant to expand rapidly amid continuing uncertainty around whether more land will come forward in the short term," he says. Spawforths director Paul Bedwell also voices caution: "We are committed to sustainable growth, so will not recruit unless the business case is compelling."

Quod has taken on three more chartered planners this year. Director Sarah Price says the firm's London office has reinforced its planning, development economics and socioeconomic teams. "We tend not to recruit too far ahead of workload and ideally prefer to promote from within. However, we do need to grow to meet our clients' needs," she says.

Numbers have grown at DLP Consulting Group this year with the acquisition of Warwickshire-based Wilbraham Associates, and the firm has opened a Leeds office. Managing director Simon James points to growing workloads for its strategic planning and research unit and public sector teams, including commissions to prepare one local plan and guide another through to adoption.

Bidwells, where levels have remained consistent over the past year, are now recruiting into the firm. Partner David Bainbridge says the firm is bringing in specialised skills in environmental impact assessment, housing need assessment and retail planning. "Recruitment is difficult in an expanding market with plenty of competition," he says. He singles London and Oxford out as localities where its service offer has expanded.

Bell Cornwell partner Ian Sowerby says the practice's unchanged staffing figures reflect a period of reassessment that has led to a "positive" attitude to recruitment in the year ahead. "Recruitment is a problem, in terms of finding people with appropriate work experience and providing the pay and conditions some candidates seek. We will not recruit at any price," he says.

At Boyer, director Andy Williams says a drop in planner numbers between the 2014 and 2015 surveys has been more than offset by the appointment of six planners since 1 September. Hiring has been challenging, as job opportunities have risen across the development industry, Williams admits. "All our regional offices have seen increased workloads as clients respond to opportunities created by local and neighbourhood planning and by changes in government policy," he says.

Amec Foster Wheeler's total of chartered planners dropped slightly last year, but an increase of 40 in fee-earners reflects expansion in its environment and infrastructure business, says head of planning, transport and design Clive Harridge. The firm's Midlands transport team has seen particular growth, he reports. But "recruiting qualified staff with relevant experience has not been easy," he says. "We would have liked to have taken on more."

Adams Hendry's chartered planner numbers are up this year. Director Andy Blaxland says the firm has recruited at principal, senior and graduate planner levels. "It can be a challenge, but we have expanded numbers in 2015 and see further growth when the right candidates are available," he says.

SLR Consulting has taken on "a few" chartered planners as part of wider growth of its fee-earning team, says director David Sandbrook. "We have found it difficult attracting chartered planners because we are not a conventional planning consultancy," says Sandbrook, who is looking to expand in Leeds, Newcastle and Bristol.

A string of appointments at Iceni Projects last month took its chartered planner total to 28, more than offsetting the small net drop shown in the survey. More hires are planned, says director Ian Anderson. "We now offer a full service including public engagement, sustainable development, heritage, masterplanning and transportation," he says. This year's acquisition of Paul Drew Design and heritage and design recruitment have made masterplanning a corporate priority, he adds.

Firstplan has continued to grow "organically" with recruitment of graduates and junior staff "who will benefit from our nurturing approach", says director Mike Woolner. "The relatively strong economy will foster steady growth in our client base over the next 12 months," he predicts. 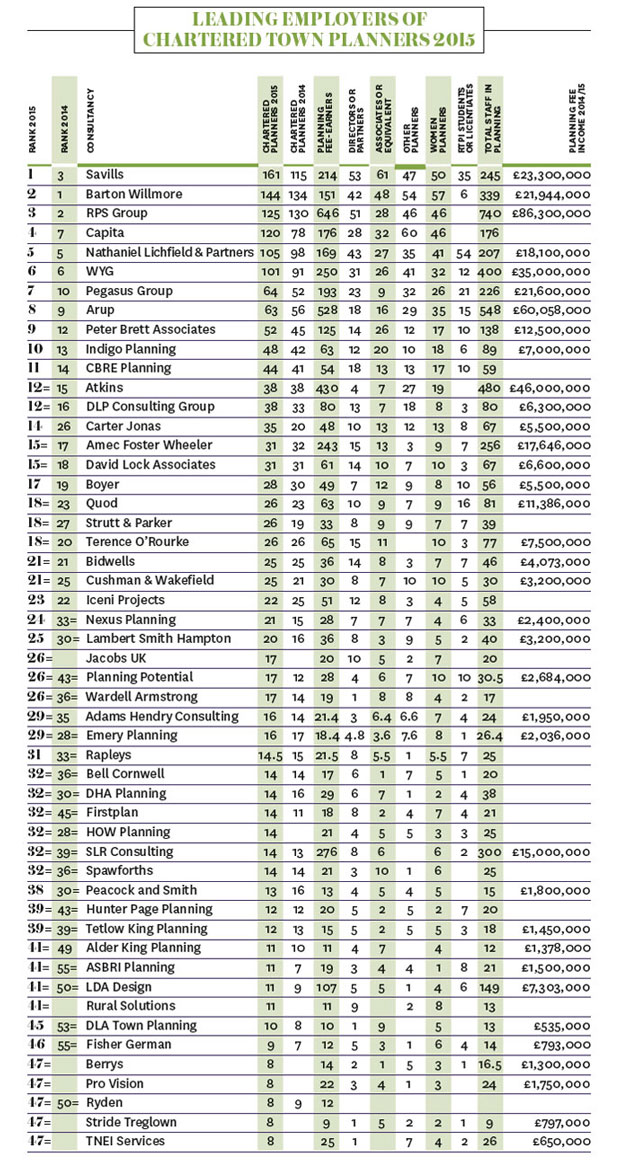 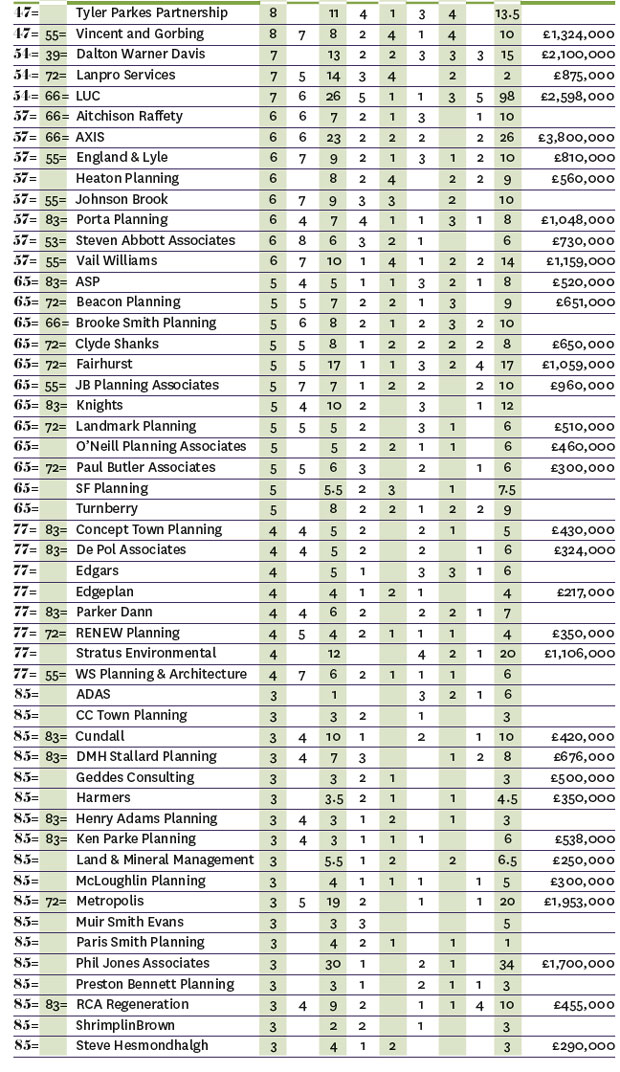