Optimism tempered by caution is the key impression to emerge from this autumn's Planning Consultancy Survey. Following improved financial results over the past year, many firms expect staff numbers to rise with expanding workloads in the sector.

The proportion of consultancies expecting the economic climate for development activity to improve over the next 12 months has fallen fractionally, from 91 per cent in the 2014 survey to 88 per cent now, leaving 12 per cent "unsure". More encouragingly, 78 per cent expect staff numbers to grow, against 61 per cent last autumn and just 49 per cent in 2013. One in five firms are unsure, but only three of the 112 definitely don't expect team size to grow next year.

Chartered planner numbers have risen at nine of the ten leading consultancies (see The UK's leading employers, p19). Among them is WYG, with ten more planners than this time last year. UK head of planning Steven Fidgett says this has been achieved by some licentiates securing Royal Town Planning Institute (RTPI) corporate membership as well as recruitment. "We are growing each of our regional teams and see growth in most sectors," he says.

Maybe not too much should be read into small falls at a few practices. RPS Group saw a net drop of five chartered planners over the year to 1 September, but business information manager Douglas Lamont says the firm took on 30 chartered planners and 40 other planning fee-earners over that period. "We continue to recruit very actively in all disciplines, including town planning," he says.

Some firms have grown substantially over the past 12 months with takeovers. Carter Jonas's acquisition of London's Planning Perspectives and Cambridge-based development advisers Januarys last winter blazed the trail. With RTPI-qualified numbers almost doubling since last autumn, Carter Jonas partner Nick Taylor says the deal has particularly increased the firm's planning capacity and project base in London and the South East.

Savills' takeover of Smiths Gore in May brought in 34 extra planning fee-earners. Head of planning David Jackson says the deal has strengthened Savills' capacity in rural planning and strategic land promotion, while adding four new offices. He says the merger was preceded by hiring 15 chartered planners, mostly at senior level, in early 2015, while a "significant number" of graduates have attained full RTPI membership in the past year. Overall, Savills' complement of chartered planners has grown from 115 to 161 over the past 12 months.

Capita's executive director for property and infrastructure Richard McCarthy says its planning capacity has been "significantly strengthened" by this summer's acquisition of GL Hearn, which reported 48 chartered planners last year. "We see growth in all our regional planning teams, particularly London and the South East, over the next 12 months," says McCarthy. He says team growth is providing extra capacity for Capita's partnerships with individual councils "to turn the tap on and off, according to their service requirements". Capita has not disclosed income figures, although the 2014 survey showed GL Hearn alone brought in planning fees of more than £11 million in 2013/14.

In September, DTZ merged with Cushman & Wakefield, which had divested itself of its planning team in 2011. Associate director Andrew Teage says DTZ was already hiring planners before the deal was announced and had reintroduced planning teams in its Bristol, Manchester and Newcastle offices over the past two years. The merger gives DTZ's planners "direct access to new clients and development opportunities", says Teage.

As well as staff numbers, the 2015 survey shows fee incomes rising across the board (see The UK's major fee-earners, p25). This year, 95 firms provided planning fee income figures for their last financial year - mostly for the period ending 31 March 2015 - showing aggregate earnings of £477 million from planning commissions. Analysis of information supplied by 68 firms, including most of the highest earners, provides detailed sectoral breakdowns for £426 million of that sum (see infographic, left).

The results are indicative only, since the firms providing data vary year on year, but the findings suggest strongly that the market for residential planning work is booming. Echoing the big rise reported in last year's survey, disclosed fee income from housing commissions grew from £77.5 million in 2013/14 to £86 million, while the figure for mixed-use greenfield work is also up.

Consultants' collective predictions of market growth in the year to March 2016 (see infographic, below left) identify housing and mixed-use as the top performers. Market shares for the commercial and retail sectors were down in 2014/15 compared to the previous year, although both are forecast to recover this year. Moreover, earnings from neighbourhood and district-level planning strategies and studies are tipped for healthy growth this year, albeit from a much smaller base.

The graph shows increased shares for most of the infrastructure sectors identified in our survey, although some predicted growth rates for 2015/16 are lower. In particular, consultants currently expect the past few years' big rises in energy work to tail off, predicting just two per cent growth next year. They identify withdrawal of tariff support for renewable energy schemes and changes in government policy on onshore wind as the key factors.

The 2015 survey obtained more details than previous years' on daily fee rates (see infographic, p27). The results show that more than 90 per cent of firms' daily rates start from £300, rising to a minimum of £1,000 a day at five consultancies, while the highest rates for senior partners and directors top £2,000 a day at three firms. In line with the generally optimistic outlook, almost two-thirds of consultancies declaring their intentions expected their charges to rise in the year ending next September, whereas only half have upped their rates in the last year.

The key message from this year's survey is that the consultancy sector is back on course for healthy growth, boosted by such factors as the government's focus on housing and disposal of public assets, land supply shortages, the 2017 deadline for local plan production, devolution deals and continuing investment in major infrastructure. Factors identified by consultants that could hamper progress include government spending cuts, chronic resource shortages in local authorities and ongoing delays in completing local plans. As Terence O'Rourke managing director Tim Hancock puts it: "The key consideration is confidence in the ability to secure planning permissions in a timely and cost-effective manner."

The Planning Consultancy Survey 2015 was conducted during September and October, with respondents having the option to complete an online survey or paper questionnaire. To encourage consistent returns, we once again refined the questions and definitions and categories used.

Following rigorous checks, we sought clarification or additional information from around 20 practices on one or more aspects of their returns, in some cases requesting staff lists to check the figures tallied. As a further quality control, we required responses to be signed off by a named senior manager. Where relevant information was supplied, we compared average fee earnings per fee-earner and invited some firms departing significantly from the industry average to confirm or revise their figures.

We received usable responses from 160 practices operating across the UK. Collectively, these firms employed 2,059 chartered town planners, 383 student or licentiate members of the Royal Town Planning Institute, 5,198 planning fee-earners and 6,163 staff altogether in UK planning services on 1 September this year. 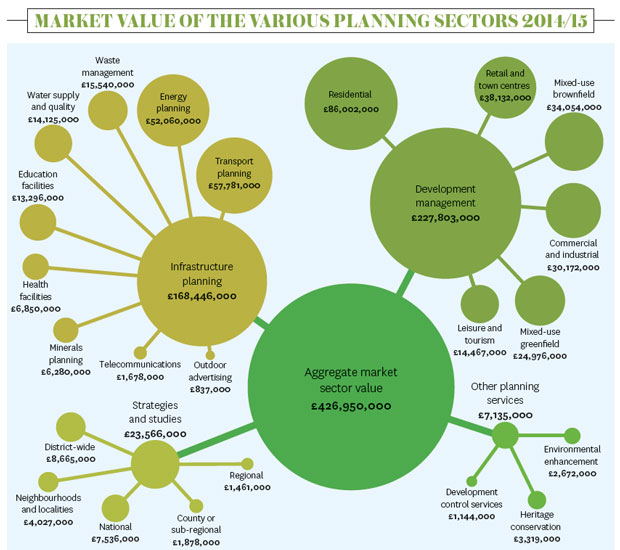 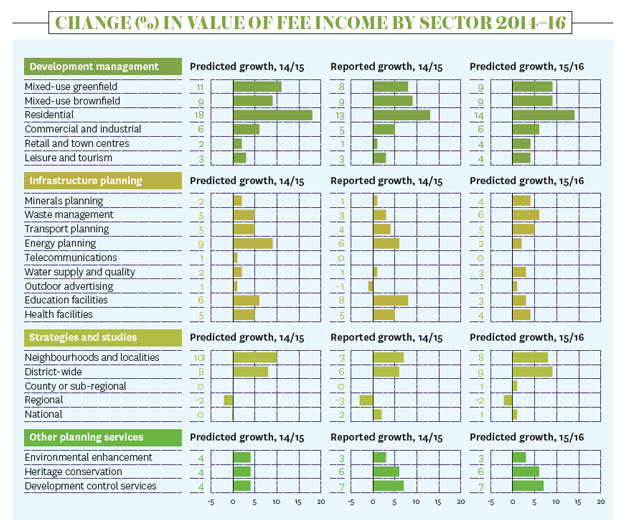