Nuneaton and Bedworth Borough Council, which is at the centre of a dispute with neighbours over how to tackle Coventry's housing overspill, has just issued a draft local plan for consultation (see updates, below).

Meanwhile, nearby Warwick District Council, told by an inspector earlier this year that its plan lacked a clear strategy to meet its housing market area's wider needs, has confirmed its local plan examination has been suspended until May.

Data compiled for Planning's Local Plan Watch bulletin (see infographic, below) shows that two-thirds of local authorities in the West Midlands have adopted local plans in place, but several did so before publication of the National Planning Policy Framework and one - Lichfield District Council - on the basis that it would need an early review if it had to meet its neighbours' housing needs.

Hampshire: Gosport Borough Council formally adopted its local plan on 14 October. It sets out a strategic vision for development from 2011 to 2029.

West Midlands: Herefordshire District Council members voted to adopt the authority's core strategy document at a meeting on 16 October. This sets a strategic vision for development from 2011 to 2031.

Devon: Inspector Keith Holland has endorsed Torbay Council's local plan, finding that it will give an appropriate basis for planning the area if changes are made, including bringing forward the end date from 2032 to 2030.

West Sussex: Inspector Geoff Salter has backed Horsham District Council's local plan, subject to modifications. Those proposed by the council include increasing the rate of housing delivery to 800 a year.

Warwickshire: Nuneaton and Bedworth Borough Council has published a proposed submission draft version of its borough plan for consultation. The consultation runs until 18 December. 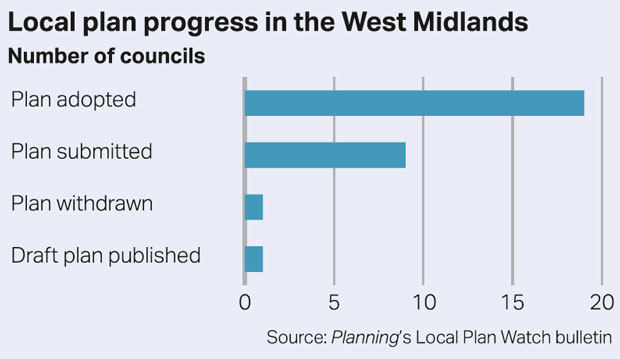 Planning's Midlands and North seminar on housing delivery is due to take place in Manchester on 1 December. For more details, go to PlanningResource.co.uk/events.