Councils across England are making little use of an enforcement tool that lets them rule that any activity in breach of planning control should stop immediately. Some experts have said officers may be reluctant to use do so because they lack familiarity with it and fear compensation claims if the activity is found lawful.

A temporary stop notice is described in official Planning Practice Guidance (PPG) as a "powerful enforcement tool". The notices require that activity in breach of planning control must cease, without needing an enforcement notice, the PPG adds.

However, recent data from the Department for Communities and Local Government shows that the tool has been little used by English councils in the past year. The latest official statistics show that only 265 such notices were issued in England between July 2014 and June 2015, with only around a quarter of councils issuing temporary stop notices during this time (see infographic, below).

He said that, if a stop notice "prohibits something that is actually lawful or it is quashed because of a validity error, then compensation is payable for the loss caused by it. What that means is that councils will not use those mechanisms if they think that there is a risk that they are enforcing against something which is actually lawful."

Izindi Visagie, founder of planning enforcement law firm Ivy Legal, said the notices could be useful if there had been a breach of conditions, particularly on major developments and Gypsy and traveller cases. She said the notices are "relatively new as a remedy compared to something like enforcement notices".

She also agreed that council officers may be reticent to issue notices if there is a risk of compensation. "With an enforcement notice compensation would almost never be payable and costs are highly unusual, but a temporary stop notice does ring alarms for people in local government," she said.

Meanwhile, Dave Westhead, chair of the National Association for Planning Enforcement, said the basis of enforcement is resolving problems without the need to serve the notice. He added that councils need not fear compensation claims: "Providing you've done your research and you've got a breach of control, there's no compensation payable if you serve the notice." 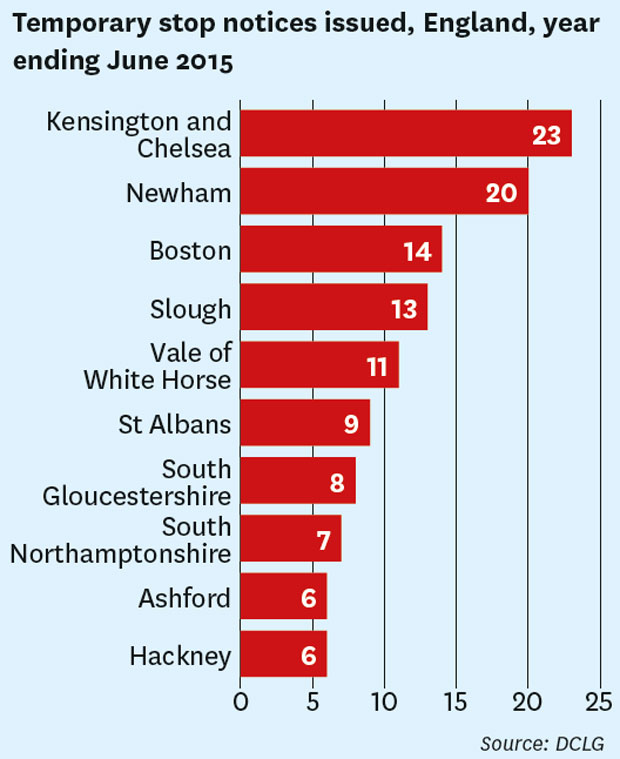