An analysis of data compiled for Planning's CIL Watch tracker bulletin shows that nearly a third of local planning authorities in the South East have now adopted CIL charging schedules, while a further 18 per cent - including Rother and Gosport- have reached the examination stage (see infographic, below). Gosport's neighbour, Portsmouth City Council, was the first in the South East to adopt a CIL charging schedule - and only the fourth in England to do so - in January 2012.

The figures also indicate that just over a quarter of local planning authorities in the South East are yet to publish a preliminary draft CIL charging schedule to go out for consultation.

According to the data, only the South West and London are ahead of the South East in levels of CIL coverage.

East Sussex: Examiner Terrence Kemmann-Lane has backed Rother District Council's CIL proposals. However, he said modifications were required, including the removal of the differentiation between the rates for greenfield and brownfield sites in the CIL charging schedule, and adding maps to define central locations.

Hampshire: Examiner John Wilde has endorsed Gosport Borough Council's CIL proposals. He said only one minor modification is required, namely to clarify that public sector sheltered and retirement housing will not be charged. This would ensure that the proposals are consistent with the authority's local plan.

North Yorkshire: Selby District Council's CIL proposals have been endorsed by examiner Philip Staddon. However, he said some modifications are necessary, requiring that definitions of retail warehouse and supermarket development types are added to the schedule for the purposes of clarity.

West Sussex: Crawley Borough Council is consulting on a draft charging schedule until 10 November. The document proposes a borough-wide charge of £100 per square metre for residential schemes.

West Sussex: The South Downs National Park Authority is consulting on its draft charging schedule until 28 October. The schedule includes three residential charging zones, for which the rates would range from £100 to £200 per square metre. 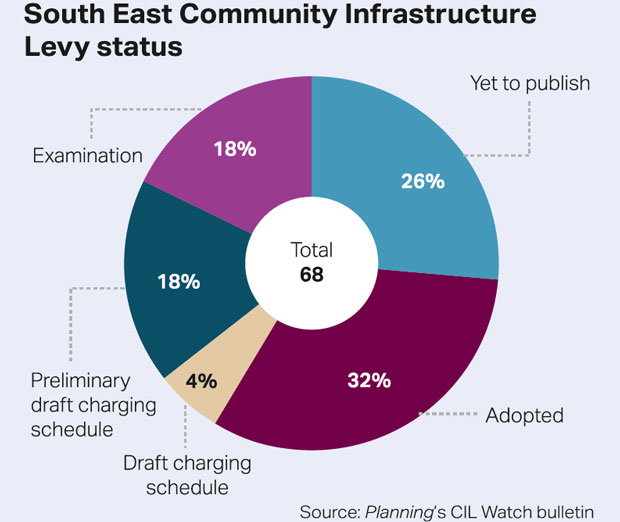