Controversial new planning guidance exempting small sites from affordable housing obligations has been consigned to the dustbin following a damning High Court judgement at the end of last month.

Mr Justice Holgate’s ruling, issued after a judicial review lodged by two Berkshire councils, forced the immediate removal of paragraphs relating to the exemption for small sites – as well as the vacant building credit (VBC) – from the national online planning practice guidance (PPG). The deletion of the guidance, introduced only last November, will have wide-ranging implications for applications now in progress and could mean that ministers change how they make future revisions to the planning system, experts have said.

The withdrawal of guidance that stopped councils in most areas from seeking affordable housing contributions on schemes of ten homes or fewer will affect "countless" schemes across England, said Jeremy Gardiner, regional director at consultancy WYG. "The immediate implication is that the ruling has undermined the financial viability of a large number of prospective housing developments," he said. "It will affect every scheme of fewer than ten dwellings that had assumed there would be no affordable housing element. You can assume that there will be schemes like that coming forward in every planning authority." 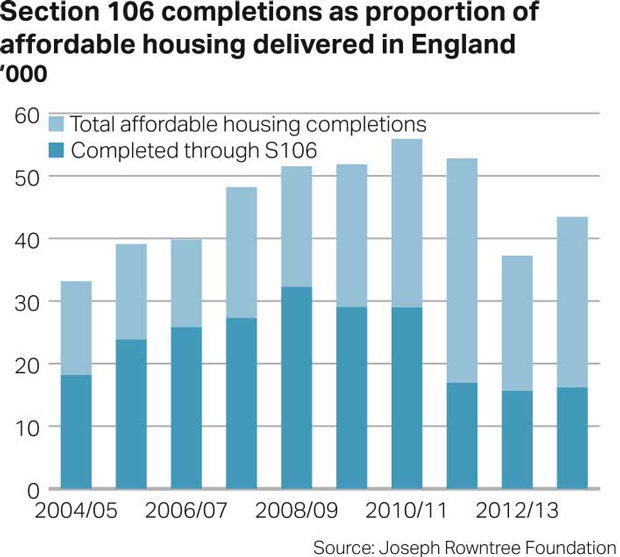 Also affected may be schemes with section 106 agreements that are subject to review mechanisms, as well as outline permissions where applicants are required to submit to a viability case at the reserved matters stage, according to Matthew Spilsbury, associate director at consultancy Turley. "There’s a risk that schemes that initially looked viable are suddenly going to take an additional hit on affordable housing," he said. "There are definitely going to be some deliverability issues. There might have to be some compromise."

Trevor Ivory, head of planning at law firm DLA Piper, said the ruling will have an "immediate impact" on any developer in the process of making an application and negotiating obligations. "If section 106 obligations are under negotiation, local authorities may look to amend what they have been seeking," he said. Ivory added that local authorities or third parties may seek to mount legal challenges over permissions that have recently been granted with reduced section 106 packages.

Gardiner suggested that options open to applicants with schemes affected by the ruling are to seek to revisit agreements with landowners or enter into negotiations with local authorities over section 106 packages. But he added: "That will take months to work through. It may mean that a reconfigured scheme can proceed, but it may mean that a scheme will stall altogether."

The fallout from the ruling is also likely to extend to local plan-making and Community Infrastructure Levy (CIL) schedules, experts have pointed out. Niall Blackie, senior partner at Midlands law firm FBC Manby Bowdler, said development plans in some areas will have been produced based on the quashed guidance. "They will need to be unscrambled and if they are adopted obvious questions then arise as to them no longer being consistent with national policy," he said.

Some councils bringing forward plans will welcome the judgment. Sam Ryan, a director at consultancy Turley, pointed to Shropshire Council’s emerging plan, which she said relies heavily on windfall and small sites. The plan had been challenged on how it would deliver sufficient affordable housing under the quashed guidance, she said. She added: "Now it has been removed, the council will say it can rely on windfall sites."

Simon Ricketts, partner at law firm King & Wood Mallesons, questioned what will happen with CIL charging schedules that have been adopted on the basis that schemes of fewer than ten units may be able to afford more CIL. In such instances, local authorities should be considering whether to review their charging schedules, Ricketts suggested. "If CIL schedules have been assessed for viability on the basis of quashed policy assumptions they will need to be addressed," Blackie added.

Meanwhile, the cancellation of the VBC, which provided developers with the opportunity to offset floorspace from empty buildings that had either been converted or redeveloped for residential use against section 106 affordable housing obligations, will create both winners and losers, according to Spilsbury. Local authorities in high-value areas are likely to be pleased by the removal of the guidance because this is unlikely to harm the delivery of schemes, he says. But he adds that other authorities will be more disgruntled as the credit had unlocked "challenging" brownfield sites that had "suddenly become viable" after its introduction. "There will be some local authorities that are disappointed. Some quite difficult brownfield sites will have to go back to the drawing board," he said.

Ricketts questioned whether the scrapping of the credit would be a big issue in central London as "authorities have been taking a progressively harder line" following revisions to the guidance issued in March, which required councils to consider whether a building had been made vacant for the sole purpose of redevelopment (Planning, 24 April, p11). "The VBC was already becoming a bit of a side issue in central London," he remarked.

Responding to the High Court ruling, the Department for Communities and Local Government (DCLG) expressed its disappointment and said it would seek permission to appeal. But Ricketts said this prospect could create uncertainty and delay the progress of development. He said developers who negotiated draft section 106 deals on the basis of the VBC may wait for the appeal’s outcome before concluding discussions. Applicants affected by the removal of the ten-unit threshold may seek to do the same, he added. Ivory agreed, saying: "There is a risk that people with these sites may well decide to sit on them."

In his judgment, Mr Justice Holgate ruled that the new guidance, which aimed to create blanket exemptions and override local plan policies with immediate effect, contravened the Planning and Compulsory Purchase Act 2004, which sets a presumption in favour of the development plan. He also ruled that the consultation process had been unfair. The judgment said, following consultation on the proposals, ministers were advised that a ten-unit national exemption would have a "significant impact" on affordable housing numbers and that a national threshold of three units would still have a "significant beneficial impact for small-scale developers, while reducing the adverse impact on the provision of affordable housing".

The judgment added that officials had advised ministers that if a threshold of ten units or fewer were to be introduced, 21 per cent of affordable housing contributions would be exempt, equating to an annual value of £693 million. According to research published last month by social charity the Joseph Rowntree Foundation, 37 per cent of affordable homes completed in 2013/14 were delivered through section 106 deals (see infographic).

Ricketts said the ruling "tells the secretary of state in capital letters that PPG is not a place for substantive changes to government policies". He added: "There are lessons for the way in which the government approaches the next round of changes to the planning system about complying with appropriate legal principles on consultation and then for the responses to consultation to be taken into account by the government conscientiously."

Ivory added that, since the introduction of the PPG, there has been a "blurring between policy and guidance". He said: "I am concerned that policy is being announced by way of changes to the guidance. This case doesn’t quite tackle that point, but does seem to move in the direction of demonstrating the need for clarity."

Mike Kiely, chairman of the board of the Planning Officers Society, said the ruling was a "shot across the bows of the DCLG". He added that the judgment makes clear that consultation responses should be examined "diligently" and given due response. "It’s not a tick-box exercise", Kiely said.