Figures from trade body RenewableUK show approval rates for wind farms dropped markedly between 2012/13 and 2013/14 (see infographic), but experts said the changes create an even tougher climate for developers and could lead to a decline in applications.

The guidance says if a council wants to grant permission for a wind project involving one or more turbines, it must be sited in an area "identified as suitable for wind energy in a local or neighbourhood plan". It also says councils may only give permission if the "planning impacts identified by affected communities have been fully addressed".

In a written statement, communities secretary Greg Clark said whether a proposal had the backing of a community will be a matter of planning judgement for councils. He added that a "transitional provision" would cover outstanding applications in areas where a development plan has not identified suitable sites. In such cases, proposals can be found acceptable if the second test – that planning impacts are fully addressed – is met.

Yana Bosseva, planning adviser at RenewableUK, said it is not aware of any councils that have identified suitable areas for wind development. "That creates a policy vacuum for wind farm applicants who have potentially been working for months on consultation and are now ready to submit their planning application," she said.

Bosseva also pointed to possible confusion over the interpretation of whether planning impacts have been "fully addressed". She added: "It’s important to note is that this is guidance and that the National Planning Policy Framework still has positive provisions for renewable energy. So it’s about the relationship between policy and guidance."

Duncan Field, partner and head of planning at law firm Norton Rose Fulbright, said the guidance creates a "tougher climate" for wind projects, adding that it will likely require more forward planning of sites. "More groundwork will need to be done before you even get to the application stage now," he said. "We are probably looking at a significantly increased delay in delivering new sites."

However, Field said there is still "plenty of scope" for future onshore wind farms. "If wind farm developers want more certainty about their development pipeline, they will have to work hard with councils to find appropriate sites to be allocated in the plan before making an application," he added.

Paul Maile, partner at law firm Eversheds, said applicants would be "incredibly nervous" after the updates. "This is not just because of the uncertainty from the proposed subsidy changes, but also because a degree of objectivity and predictability is removed from decision-making process."

Maile added that the guidance and subsidy change would "reduce the number of applications coming forward". He said: "It’s a combination of two uncertainties: first, in the planning system as to whether a consent might be achievable, and second, whether a project will be economically viable. That’s a great deal of risk for any applicant."

Michael Wilks, who leads on nationally significant infrastructure projects for the Planning Officers Society (POS), said he does not believe that many local plans contain spatially specific strategies allocating sites for wind energy, "in part because it would be so politically contentious that a local authority would avoid that debate and rather assess individual applications as they arrive".

Philip Ridley, head of planning at both Suffolk Coastal and Waveney District Councils and POS’s natural resources specialist, said the tests set out in Clark’s statement would make it "almost impossible" for consent to be granted. The government has "put so many costly hurdles in place no developer is going to risk the investment to begin to take a scheme forward", he added.

Earlier this week, energy secretary Amber Rudd told MPs that the Planning Inspectorate would not be able to overturn local decisions on onshore wind projects. However, a Department for Communities and Local Government spokesman confirmed that developers will retain the right to appeal decisions although they will have to take into account the "clear requirement" for local backing.

John Rhodes, director at consultancy Quod, said the statements made by the government would be important material considerations in any onshore wind proposals and "will no doubt weigh heavily with local authorities and the Planning Inspectorate". He added: "It will be a brave, determined or reckless promoter who now brings forward wind farm proposals onshore in the light of the government’s strongly stated policy." 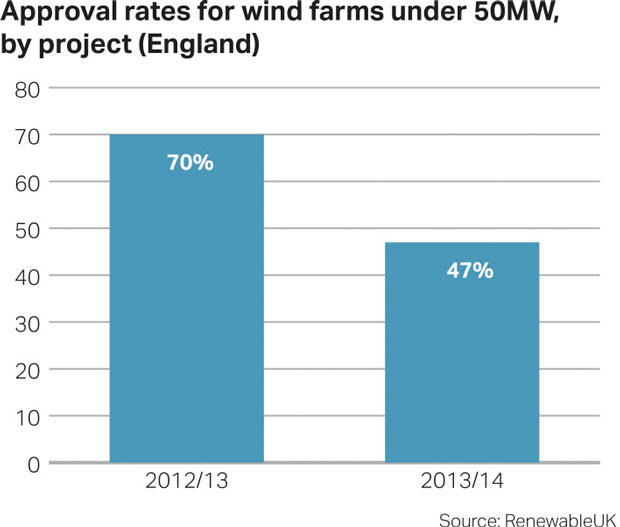