The scales have tilted once again in favour of No5 Chambers' Martin Kingston QC in this year's nominations for the senior barristers whose work exemplifies best practice in planning law. Kingston pipped Landmark Chambers' Christopher Katkowski QC for the top slot in a field narrowed by the departure of No5's Ian Dove QC - rated second in the 2014 survey - to the bench last October.

Kingston says he now focuses mostly on strategic work, particularly infrastructure, and less on housing. Yet he is rated among the top five silks in all three major development fields - housing, commercial and infrastructure - on which we sought nominations for specialist expertise this year.

He has provided advice and strategy for Isle of Anglesey County Council on proposals for the Wylfa nuclear power plant and to York Potash for its application to mine in the North York Moors national park. He continues to act on a number of other minerals-related schemes and represented developer Serco in a High Court challenge over a rail freight terminal in Hertfordshire.

Kingston says the effects of 2012's landmark Lords ruling in Tesco Stores v Dundee City Council are still being felt, with a new avenue of work in the resultant scope for challenges on the grounds that decision-makers have misinterpreted policy.

Katkowski attracted the most nominations for commercial expertise this year. He helped Tottenham Hotspur Football Club fend off a legal challenge to a compulsory purchase order (CPO) for its planned new stadium in north London, and developer Lateral to win permission from Wakefield Council for Castleford Tigers' rugby league stadium. He also successfully defended Cheshire East's refusal of 300 new homes at a public inquiry.

Katkowski says the proportion of his caseload comprising court cases has increased to around 50 per cent, which he attributes to the coalition government calling in fewer commercial applications. He reports a decline in the level of retail work, as major retailers move away from large out-of-town schemes to focus on smaller in-town stores.

Landmark's David Elvin QC, who climbs from fifth to third overall, also won top five ratings in the commercial and infrastructure tables. Elvin says he focuses on urban regeneration schemes and identifies an upturn in the number of CPOs pursued by councils, after a lull during the recession. He says developers are increasingly bringing barristers in to advise on schemes at a much earlier stage to reduce the risk of legal challenge.

Elvin has been advising the London Borough of Croydon and developers Westfield and Hammerson on planning, valuation and CPO issues for the proposed redevelopment of Croydon's Whitgift shopping centre. He advised the mayor of London and housebuilder St James on the first proposed mayoral CPO at Southall Gasworks. At a public inquiry, he represented racing interests in opposing residential development in Newmarket.

A third Landmark barrister, James Maurici QC, moves into the top ten just three years after taking silk. Housing, solar and harbour schemes are prominent in his current workload. He says the last 18 months have seen a big rise in housing cases due to an economic upturn. "The National Planning Policy Framework has been a big source of increased work for everyone," he adds.

Maurici acted for the Science Museum and Swindon Commercial Services at inquiry after their application for the largest solar farm in England was called in. He also acted for the secretary of state in a successful green belt test case appeal of a High Court decision requiring reconsideration of rejected tarmac runway plans at Redhill Aerodrome.

Last year's survey was published too close to the 2014 round of Queen's Counsel appointments to include James Pereira QC in the senior barristers rankings. This, year the well-regarded Francis Taylor Building (FTB) barrister has climbed straight into the top five. In the meantime, he has successfully defended Forest of Dean and Wealden District Council's core strategies against legal challenges over environmental assessment and wildlife regulations and appeared at half a dozen CPO inquiries, including for the Watford Health Campus and housing schemes in Hackney, east London.

Pereira says he is currently doing a broad mix of work, including a number of development consent order (DCO) cases under the nationally significant infrastructure project regime as well as CPO and housing work. He says the housing market is taking off again, with legal arguments now switching to councils' justification for five-year housing supply estimates under changing circumstances.

Richard Harwood QC of 39 Essex Chambers is another recent silk who has improved his ratings this year. His recent workload included representing a landowner at a DCO hearing into Cornwall Council's proposals to dual part of the A30 (see How We Did It, p32), a parish council seeking a judicial review of Northumberland County Council's approval of a livestock building and a landowner served with an enforcement notice preventing paintballing.

A statistical quirk puts five silks in equal seventh place this year. Taking them in alphabetical order, No5 Chambers' Jeremy Cahill QC wins most nominations for expertise in the housing sector. He represented developer Barberry at a public inquiry into an application for 500 homes in Droitwich, promoted 200 homes at a site in Ashbourne, Derbyshire, and acted for Muller Property Group on Cheshire East Council's refusal of 200 homes.

Landmark Chambers silk Tim Corner QC's recent work includes acting for Canary Wharf Group and Qatari Diar in obtaining consent for the Shell Centre redevelopment, which has just survived a judicial review bid, and the London Borough of Haringey on the Tottenham Hotspur CPO. He also appeared at a Privy Council hearing on a compulsory purchase appeal from Antigua and promoted a large opencast coal mine in County Durham.

FTB's Morag Ellis QC acted for a development consortium on a statutory challenge to the adoption of Lichfield District Council's core strategy by another housebuilder. She has also appeared in a number of appeal hearings, including for the National Trust opposing a wind farm in Derbyshire and for the London Borough of Camden over demolition of an old Victorian home.

Apart from Pereira, the biggest climber in this year's top dozen is James Findlay QC of Cornerstone Barristers. His recent cases include preparing an objection for the National Farmers Union to the High Speed Two hybrid bill, successfully acting for Mole Valley District Council in a judicial review of its approval of a hotel and golf scheme at Cherkley Court, Surrey, and for Sports Direct at an out-of-town retail inquiry in Newport, Gwent.

Cornerstone colleague Mark Lowe QC, rated among the top five for commercial work, acted for Hertfordshire County Council in a successful appeal of the government's refusal of a new waste incinerator at Hatfield; a developer at an appeal against Basildon Council's refusal of 750 homes on green belt land; and a convent in judicial review proceedings over the approval of 198 homes on its land by Chiltern District Council.

Elsewhere in this year's rankings, Michael Humphries QC and newly elevated silk Hereward Phillpot QC reinforce FTB's reputation in the infrastructure field, receiving the most nominations in that sector. Despite finishing outside the top ten overall, Peter Village QC of 39 Essex Chambers and Paul Tucker QC of Kings Chambers are rated leaders for housing expertise, while Landmark's Russell Harris QC won top five placings in the commercial and infrastructure fields. Cornerstone's Mary Cook was the only junior to appear in the top five for any sector, being ranked fifth for housing expertise.

He also identifies a rise in the amount of work coming from challenges to housing approvals in the green belt and from infrastructure schemes. By way of example, Reed cites his involvement in a successful appeal on behalf of the Academy Trust for a new academy in Dorset, an appeal against a decision to refuse homes in the South Downs national park, and a commission from St Albans City and District Council in its a High Court challenge to a strategic rail freight scheme in Hertfordshire.

Another Landmark junior, Charles Banner, retains top place among the highest-rated planning barristers under 35. Banner calculates that Tesco v Dundee, as cited by Kingston, has led to an increase of up to 40 per cent in work for the planning bar. On the downside, he says it is getting harder for junior silks to cut their teeth representing councils because they are increasingly using cheaper in-house legal staff or solicitors to represent them.

Banner's recent appearances include representing HS2 Action Alliance in its Court of Appeal challenge to safeguarding directions for the High Speed Two rail link. He acted for housebuilder Larkfleet in its judicial review challenge to the Uppingham Neighbourhood Plan and for the promoters of a 4,250-home urban extension in Leicestershire, fighting off a judicial review challenge by the county's police commissioner. 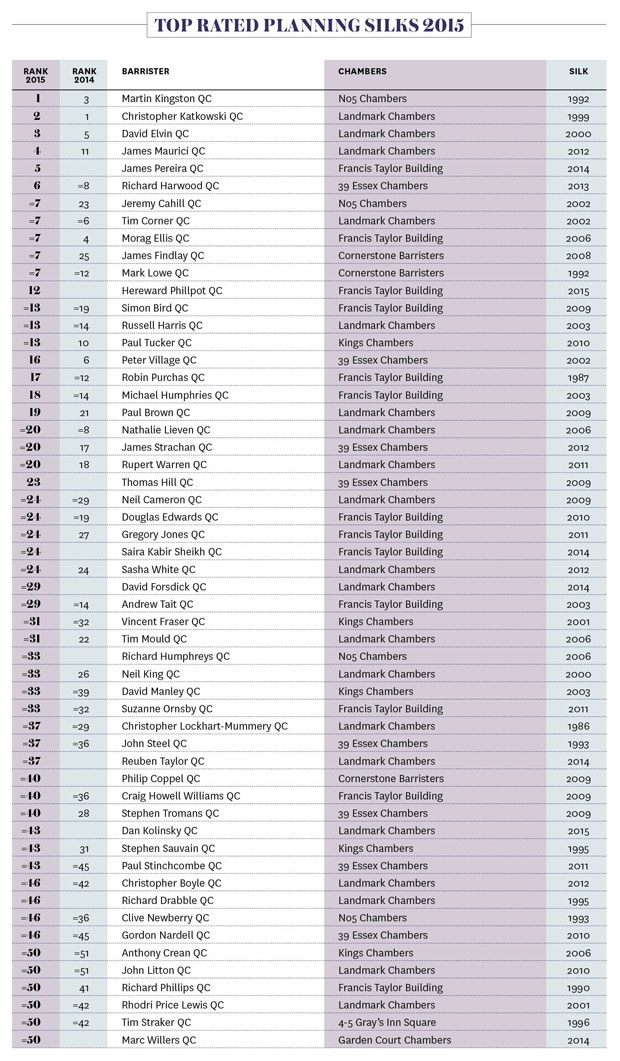 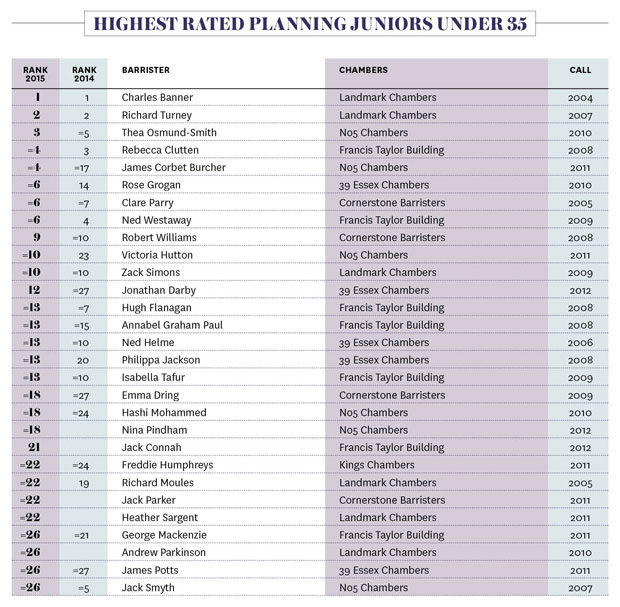 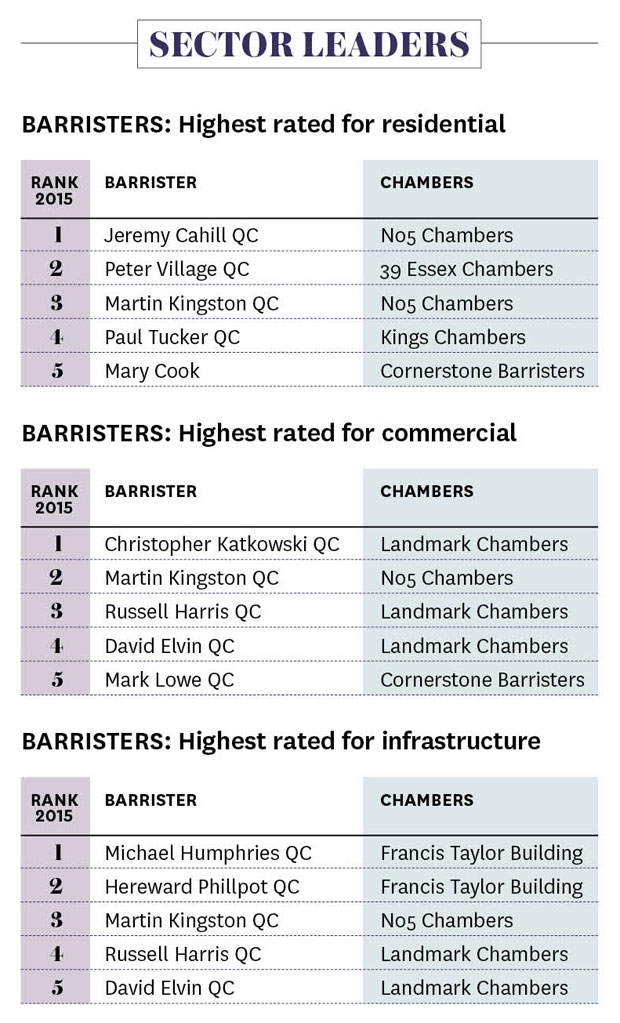